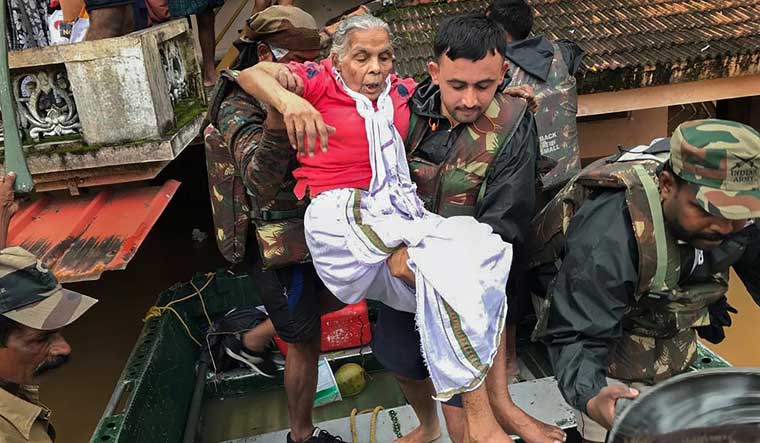 The UAE government on Tuesday announced a relief of Rs 700 crore ($100 million) to Kerala where torrential monsoon rains triggered the century's worst flood, killing hundreds of people and leaving a trail of destruction.

However, reports suggest that Kerala will be facing policy hurdles as there is no provision which allows states to accept financial help from any foreign country.

Quoting sources close to the ministry of external affairs, reports said that India can accept foreign aid only as loan. They said government has taken a considered decision to rely solely on domestic efforts to tide over the situation in Kerala.

However, the ministry has not made its stand clear over the issue. India had rejected foreign assistance after the 2004 tsunami and 2013 Uttarakhand flood.

Earlier on Tuesday, Kerala Chief Minister Pinarayi Vijayan informed the media about UAE's decision to give assistance in a press meet, adding that he was grateful to the Arab nation.

"Today morning, Sheikh Mohammed bin Zayed bin Sultan Al-Nahyan, the Crown Prince of Abu Dhabi, informed our Prime Minister about their contribution for Kerala and this was conveyed to me by M.A. Yusuf Ali (who owns Lulu Supermarkets)," said Vijayan. "The Kerala diaspora has been a huge source of help for us. Since they have done tremendous service in the Middle East, it has helped build good relations with the governments there," he said.

Around three million Indians live and work in the UAE out of which 80 per cent are from Kerala.

The government of Maldives has also decided to donate USD 50,000 (Rs 35 lakh) for flood-affected people in Kerala.

Meanwhile, the Union government on Tuesday released Rs 600 crore to Kerala even as the the National Crisis Management Committee (NCMC) met again to review the rescue and relief operations in the state.

Heavy rains accompanied by flash floods and series of landslides ravaged the tourist state where more than 200 people have died and 10 lakh have been forced into relief camps.