The rising tide: Perhaps, 2018 flood is only a gentle warning 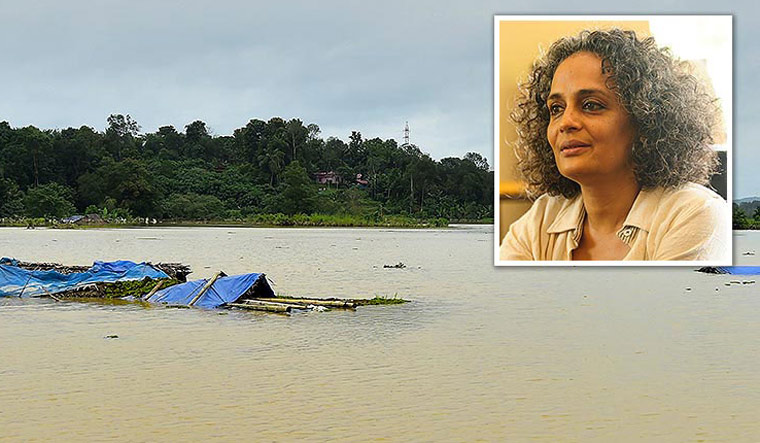 It will not be enough for us to rue the past, writes Arundhati Roy

This year in Kerala, the monsoon that we long for, and the rivers that we pretend to love, are talking back to us. Certainly, for me, the rain was the ink in my pen, and the river, the Meenachil, drove my story. They made me the writer that I am. Now their fury is unimaginable, and the scale of the disaster and peoples’ suffering is still unfolding. The Army, the navy, various government agencies, local communities, an extraordinary collective of fisher folk, journalists, and thousands of ordinary people have shown exemplary courage and fellow-feeling, risking their lives to bring others to safety. Help and money is pouring in. More help and more money will be needed. And yet, as the waters recede, revealing oceans of plastic and debris, we are faced with the fact that it would be dishonest of us to treat this calamity purely as a natural disaster in which we humans played no part.

We know by now that in the era of global warming and climate change, the mountains and the coastal areas will be the first to pay the price. The intensity and the frequency of climate catastrophes will only increase. California is burning. Kerala is drowning. Our beloved Kerala is a strip of land sandwiched between the mountains and the sea. We could not be more vulnerable.

Unbridled greed, the shocking denuding of forest land for mining and illegal development of resorts and homes for the wealthy, illegal construction that has blocked all natural drainage, the destruction of natural water storage systems, the blatant mismanagement of dams, have all played a huge part in what is happening. How could it be that the Central Water Commission did not predict this flood? How could it be that dams that are supposed to control floods ended up releasing water from their reservoirs at the height of the crisis, magnifying the disaster several times over?

Today funds are pouring in to the Chief Minister’s Distress Relief Fund— much of it hard-earned money from ordinary people, believing quite correctly, that it is only the government that can co-ordinate relief work that will reach the most far-flung places where the most vulnerable people live. And yet, many of us worry about these funds being controlled by the very machinery that ignored past warnings in the first place. The Madhav Gadgil Committee Report, for instance, predicted just such a scenario if the government did not take serious steps to control unplanned development propelled by corrupt politicians and avaricious businessmen and industrialists.

Disasters such as this one can bring out the best as well as the worst in people. It can bring people together, or it can widen the fissures and reward those whose deeds are to some extent responsible for creating the catastrophe. We have seen how during other disasters, like the Tsunami, or Hurricane Katrina in New Orleans, ruthless developers moved in to try and take over the lands and homes of the most vulnerable people. Here in India, sadly, various forces are at work, doing their best to spread poison and disaffection between communities, at a time when there should only be love and concern. Fortunately, the people of Kerala have never fallen prey to this, and are unlikely to now, in their moment of grief and hardship.

We hope and trust that in the days and weeks to come, while people try to put their devastated lives back together, the Kerala government will pay special attention to its most disadvantaged people, in particular dalits and forest-dwelling Adivasi people who do not have the power or the means to elbow themselves to the front of the queue for aid and relief.

It will not be enough for us to rue the past. Rebuilding and rehabilitation cannot be taken to mean a return to business as usual. We will have to take steps to correct the environmental imbalance we have created. If not, God’s Own Country will cease to be fit for human habitation. For all its fury, perhaps the 2018 flood is only a very gentle warning.