Kerala: Meet Vishnu, the trader from MP who donated all his blankets to flood victims

Fourth of the five siblings, Vishnu came to Kerala when he was 16 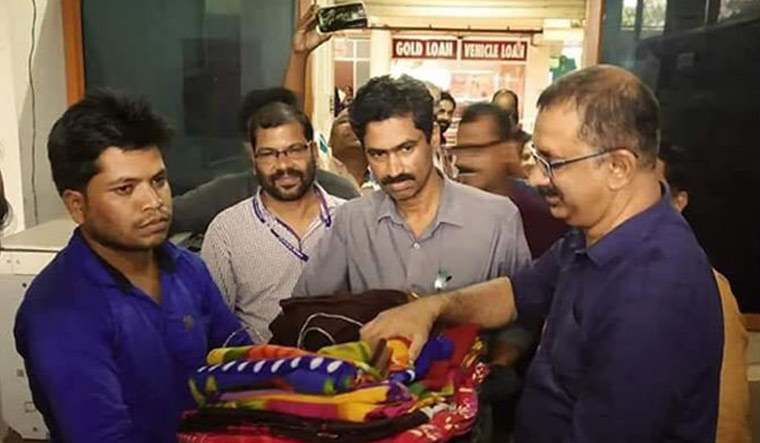 Sharing takes great courage—especially when you offer someone everything you have. Vishnu Kachhawa, a door-to-door salesman from Madhya Pradesh who sells blankets in Iritty, in Kannur district of Kerala, became a star on social media overnight, after he donated his entire stock of blankets to people in a flood-relief camp at Adichukootti Government School, Mangad, in the district.

For Vishnu, it was an opportunity to give something back to the land and its people who have been helping him earn a livelihood for more than 12 years.

Vishnu, 28, hails from Neemuch district of Ujjain in Madhya Pradesh. Fourth of the five siblings, Vishnu came to Kerala when he was 16. He lives with his wife, Kumkum, and two children—a five-year-old son and a one-year-old daughter—in Iritty, Kannur. “Kannur is my second home. Kerala has given me everything—a place to stay, a livelihood to support my family and raise my children... and really good climate. I am seeing Kerala in such agony for the first time. I cannot afford to watch people suffering and I gave them what I have,” Vishnu said.

Vishnu purchases his blankets from Panipat, Haryana, and brings it to Kerala along with his four partners. They divide the stock and sell it at homes, government offices, banks and private firms. It was on August 10, that Vishnu visited Iritty taluk office, one of his usual destinations, with a fresh lot of 50 blankets. Iritty deputy tahsildar Lakshmanan discouraged Vishnu from doing the rounds of villages in the wake of lashing rain and flood.

“Vishnu used to visit our office with a huge pile of blankets, doormats or dress materials. All of us used to purchase products from him. Moderate pricing and his frequent visits made him a trusted trader,” Lakshmanan said. “When he came with about 50 blankets on Friday, I told him of the bad weather and flood situation in the district. I said it is better to stay away from flood-affected areas as there were reports of landslides," he said.

“I thought he was joking. I asked him how he would earn his living if he donated his blankets. But Vishnu was adamant. We took him to the Adichukootti school where a new camp had opened. Fortunately, Kannur collector Mir Mohammed Ali was on a visit to that camp and Vishnu could directly give the blankets to him,” Lakshmanan said.

Vishnu says that things are not easy for a migrant labourer in southern states. “Back in north India, we are all connected by Hindi. However loyally you serve, you will remain a 'bhayya' in Kerala,” he said.

Vishnu said he has faced discrimination from Keralites. “But once you learn the language, everything is fine. (You) can't blame the natives because that's the kind of news they hear about us. No one writes about the good things we do,” he said.

Having started as a salesman under a businessman, Vishnu slowly started taking up orders and built his own customer base in Kannur. Now, he earns as much as Rs 36,000 from a single lot. He also sends cash to his ailing parents in Neemuch. Vishnu is also pursuing an undergraduate course through a distance learning programme.

“My elder brother is a schoolteacher. All other brothers are into blanket business. It is my elder brother's dream to make me a graduate. I am studying BA Hindi now,” Vishnu said.

He said he wanted to settle down in Kerala and blend with the culture of this land. He plans to expand his business by hiring more partners so that he can stop wandering with the load. “Keralites helped me when I wanted money. Now, they are in a need and all that I have are some blankets. I shall stay by their side through thick and thin,” Vishnu said.

He is unaware of the fact that he has become a star on Kerala's social media space. When he was told about it, he laughed and said “Baap re! Has my news gone viral? My wife will be amused!”