Police fired at the protesters in self defence, observed the commission 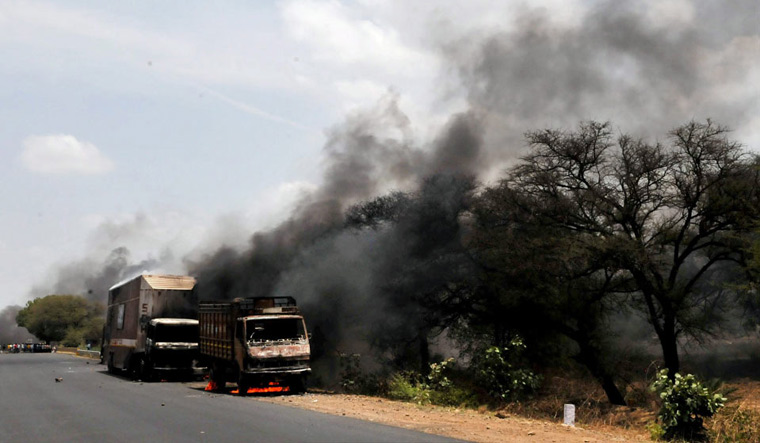 After nine months of delay and three extensions, Justice J.K. Jain commission has submitted its report in the Mandsaur police firing and has given clean chit to district administration, including the collector and the SP. The commission, however, said that proper rules and procedures were not followed during the firing that resulted in the death of five people on June 6, 2017.

The report, submitted to the chief secretary on June 11, said that police should have fired first on the protesters' legs, but instead resorted to direct firing. The commission report will be tabled before the Madhya Pradesh cabinet on Wednesday. The commission, which examined 211 people including 185 civilians and 26 government officials, gave clean chit to collector Swatantra Kumar Singh and Superintendent of Police O.P. Tripathi, who were suspended immediately after the incident.

The commission held the "failure of intelligence" as the main cause of the incident and "officials present on the spot who did not try to know the demands of the farmers". It said that the police firing was done in self defence.

Soon after the police firing and subsequent violence, the Madhya Pradesh government had appointed a single-member Commission of Inquiry to probe the circumstances that led to the violence. Former high court judge Justice J.K. Jain was appointed the chairman of the single-member commission. The commission was asked to inquire on the five points given by the government and submit its report in three months from the day of publication of the notification.

"We have been denied justice through this commission. It was supposed to give its report in three months, but it took a year. The whole affair is fishy," said Congress leader and former MLA Paras Saklecha, one of the petitioner in the firing case in the high court.


The commission also pointed out that there was no coordination between the police force and the local administration. The cops who threw tear-gas shells lacked training and  hence, ultimatums and warnings were not effective enough.

The commission was asked to probe five points given by the government and submit its report within three months from the day of publication of the notification. Circumstances under which the incident took place, whether force used by the police was reasonable, who was responsible for the incident, whether the district and police administration took appropriate steps during the incident and suggestions to stop such incidents in future were the five points emphasised by the government. The notification was issued under Commission of Inquiry Act, 1952 (60 of 1952).