Is Congress playing the dalit card to tame Deve Gowda? 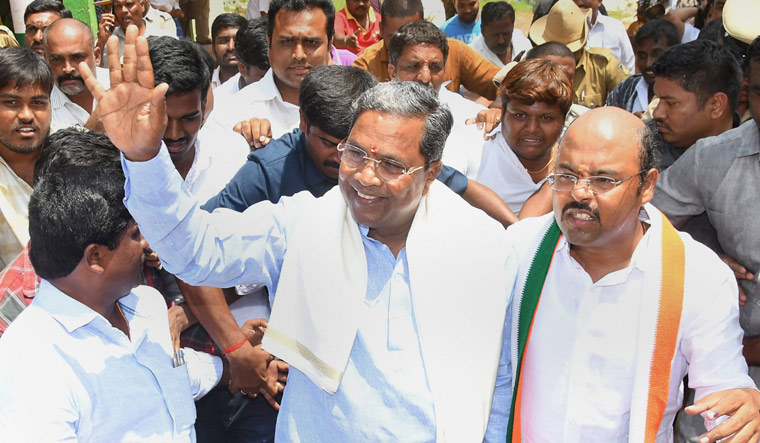 Will Karnataka finally see a dalit chief minister? With senior dalit leaders in the Congress party getting more vocal about their chief ministerial aspirations, the possibility of sweeping a clear majority and Chief Minister Siddaramaiah getting a second term as chief minister, this seems to be the indication.

Soon after polling, on Saturday, Chief Minister Siddaramaiah, who dismissed all exit poll results indicating a hung verdict, declared that his party would sweep a clear majority.

“It is crystal clear. The situation is in favour of Congress Party and we will come back to power on our own with a clear majority. I am going to be the chief minister again,” said Siddaramaiah exuding confidence. However, on Sunday morning, he seemed to have had a sudden change of heart, as he clarified that his party high command was “free to choose a dalit chief minister”.

“I have no issues. If the high command says they want to make a dalit CM, I will let them do it. I am not against anybody. Even MLAs have to give their opinion. It is the prerogative of the party high command and the MLAs to choose the CM,” said Siddaramaiah.

In the given situation, it is no secret that Siddaramaiah has better control over the party MLAs than any other leader in the state. The party will be walking a tight rope in case of a hung verdict as Siddaramaiah's own sour relations with the JD(S) patriarch H.D. Deve Gowda might play the spoiler for a possible Congress-JD(S) alliance.

Speculations are rife over the Congress Party approaching the JD(S) in case of a hung verdict. A close fight has left all parties guessing. The poll outcome is sure to redefine the political alignment in the state. While Deve Gowda has vehemently denied having any alliance with the two national parties, the Congress is trying to strike an alliance with the JD(S) by presenting a dalit chief ministerial candidate. The front-runners for the CM post are KPCC chief G. Parameshwara and veteran leader Mallikarjun Kharge.

Knowing the farsightedness of Deve Gowda, he would not take the blame for having denied a dalit from becoming the chief minister. Moreover, it will also fulfill his political game plan of keeping both Siddaramaiah and Vokkaliga leader D.K. Shivakumar out of the race.

Meanwhile, KPCC chief G. Parameshwara, who addressed a press meet, has welcomed Siddaramaiah's statement, saying, “I welcome his stand. I will not speak about my candidature. But as a tradition, the Congress Legislature Party and the high command decide on the CM following due deliberations. Last time, Siddaramaiah was chosen as the CM in a similar fashion,” said Parameshwara, who is also the CM-in-waiting.

Reacting to Siddaramaiah's statement at his residence in Kalburgi Mallikarjuna Kharge, said, “I have never applied for the CM's post as a dalit. If they are ashamed to accept me as a leader, let them consider me as a senior party-worker. I welcome if the party considers me for the top post based on my seniority and not because of my caste.”

“There is no use talking about it every time. If it has to happen, it will happen,” added Kharge, indirectly staked claim to the CM's post, while expressing anguish at being sidelined in state politics.

BJP Bellary MP B. Sriramulu, who contested against Siddaramaiah from Badami, alleges it is Congress Party's “desperation” to hold on to power and its “hypocrisy” at work.

“Fear of defeat in both seats is the reason for Siddaramaiah's statement. There are so many dalit leaders in the Congress any one could have become the CM. But it is only today that Siddaramaiah remembered the marginalised community. If Congress had concern towards dalits, why did they declare Siddaramaiah as the CM last time? After the post poll surveys, Siddaramaiah has realised that his party will not win and he too will lose. So, he is now readily offering the CM seat to a dalit. What kind of a leader is he? Why did Siddaramaiah suddenly remember the dalits? He could have told the high command earlier too. Are we so low?” Sriramulu said.

Incidentally, Deve Gowda has refused to make any statement before the poll results are declared, while his son H.D. Kumaraswamy, has flown to Singapore with his actor-son Nikhil Kumar.

Most of the exit polls predicted that the BJP would get the majority of seats in the Karnataka Assembly elections. Six out of eight major exit polls by news channels made the predictions. Other polls predicted a hung assembly with neither the Congress or the BJP getting a majority. These polls suggest that the JD(S) would emerge as the kingmaker.

The Karnataka assembly elections were held for 222 out of 224 seats.

In 2013, the Congress had won 122 seats. The BJP and the JD(S) won 40 seats each, while Yeddyurappa’s then Karnataka Jantha Paksha got six seats. It remains to be seen if the Congress can retain similar results this time around or if the state would swing along to the exit polls favouring the BJP. The counting of the votes will take place on May 15.