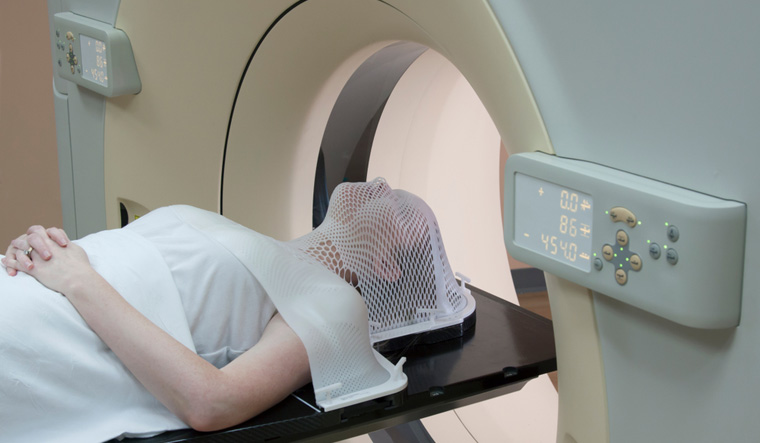 Newer technologies are giving cosmetic relief to cancer patients undergoing chemotherapy, even as doctors stress on the need for regular check ups.

He alarmed that the ratio of people succumbing to cancer, which is caused due to forms of tobacco consumption, is 200 per cent more than those losing lives for not wearing helmets.

Dr Toprani said that 27 crore adults in India use tobacco and 9 crore of them are expected to get into serious problem. He also said that 15 lakh new cancer cases are reported every year in India and these are only reported cases. Here we are not talking about unreported cases, he added.

However, newer technologies are bringing some cosmetic relief for cancer patients. Medical oncologist at HCG Centre, Dr. Manasi Shah, said that the scalp cooling technology is helping to prevent hair loss during chemotherapy sessions. Dr. Shah said that they have come across many patients who refuse to undergo chemotherapy only for the reason that people would get to know about they suffering from cancer due to the hair loss.

Head of Medical oncology at HCG Centre, Dr. Ashish Kaushal, said that the US FDA approved scalp cooling technology encourages patients to have positive outlook during chemotherapy treatment and helps in maintaining their privacy.

Bharati Sachdev, a breast cancer patient undergoing chemotherapy sessions, said that the scalp cooling technology has helped her a lot and that she has been a witness to several patients rejecting chemotherapy only because of hair loss.

HCG Centre in Ahmedabad is the first in Gujarat to have introduced the scalp cooling technology. Dr Shah said that there are about six to seven hospitals in the country where this technology is available. Used in the USA and European countries for the last five years, the technology that is available in 30 countries across the globe has recently come to India, said Dr. Shah.

Explaining how the scalp cooling technology works, Dr. Shah said that chemotherapy targets fast dividing cells in the body. Hair is the second fastest dividing cell and hence chemo drugs cause hair loss. According to her, the scalp cooling therapy causes blood vessels in the scalp to shrink, which reduces the amount of chemo that reaches the hair follicle cells and thus protects them during and after chemotherapy.

Dr Bharat Ghadavi, regional director (Gujarat and Rajasthan) of HCG Group told THE WEEK that manicure and pedicure services are provided free of cost during chemotherapy sessions to women. This makes them feel good and also diverts their attention during the procedure that takes about three to four hours.

While it can be used for all solid tumor cancers, it is not used for patients with blood cancer and those undergoing bone marrow transplant.

During the chemotherapy sessions, the patients are supposed to wear this cooling caps that are attached to machines. There are dos and donts with regards to hair before and after sessions. Dr. Shah said that additional cost of the scalp cooling therapy comes to Rs 3,000 to Rs 4,000.

The doctors said that they also provide beauty services like manicure and pedicure services to cancer patients to bring about positive outlook in them.