Aim is to encourage conversations about gender spectrum 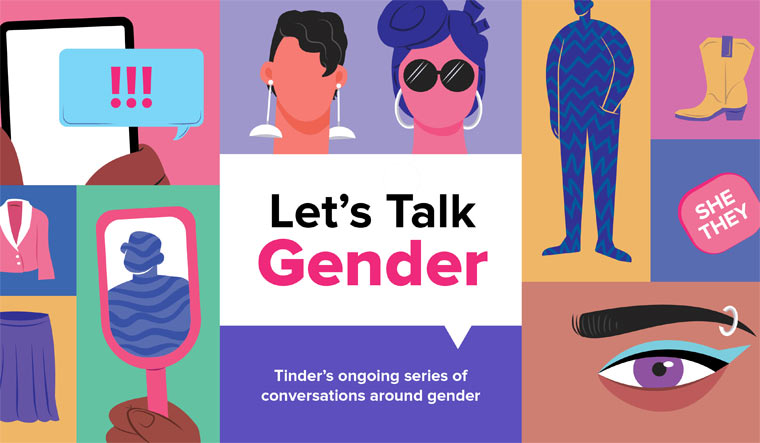 Tinder, a popular app for meeting new people, launched LetsTalkGender.in, a guide and glossary for encouraging conversations about ways in which individuals identify and express their gender.

The dating app had empowered its members to identify themselves beyond the binary from 2016.

Taking a cue from over 50 gender identities and nine sexual orientations available on the app, LetsTalkGender.in was developed with a diverse group of several contributors from the LGBTQIA+ community. It explains what the binary is, why it is experienced as limiting, the importance and use of pronouns and what a partner's queerness means for someone who is dating them, along with answers to frequently asked questions and curiosities.

As one navigates through the microsite, it gives a glimpse into the lived experiences of members from the Tinder community. The portal has been developed in partnership with Gaysi Family, which is a digital space for Gay Desis.

Sakshi Juneja, one of the co-founders from the Gaysi Family, said, "The way we understand and experience gender is evolving, and the only way to stay abreast of it is to keep having these conversations. Not just within the community, but in wider social spaces, because it also shapes our relationships, both intimate and otherwise, how we navigate consent, how we are able to access resources and institutions such as marriage. And it’s important that brands like Tinder, who have a considerable influence and presence in society, support the creation of such spaces to engender and create an environment that is inclusive where such expressions can be freely explored.”

Aahana Dhar, director of communications India, Tinder, said, “ LetsTalkGender.in is a long-term commitment which deepens the support to the Indian LGBTQIA+ community and encourages inclusive conversations in the dating ecosystem. With more than half of Tinder members globally being 18-25 year old, Tinder has revealed its LGBTQIA+ member base has grown at twice the rate of its overall membership, and that non-binary is the No. 1 “more genders” choice in the app.”

‘LetsTalkGender.in’ represents the fluidity that exists in the gender spectrum with voices from the LGBTQIA+ community keeping gender, sexuality and personal autonomy at the core. In India, the feature pertaining to the LGBTQI+ community was built in partnership with Humsafar Trust to add gender orientations, including indigenous identities. A litany of terms associated with the queer community have been simplified and explained. Take these terms for instance: gender queer, gender fluid, gender questioning, gender non-conforming, gender variant, transgender, agender, bigender, pangender, transfeminine, Kothis, demi gender, and more. Each one is explained and makes for an interesting read for hetero individuals too, so as to understand how to identify a person in non-binary terminologies.