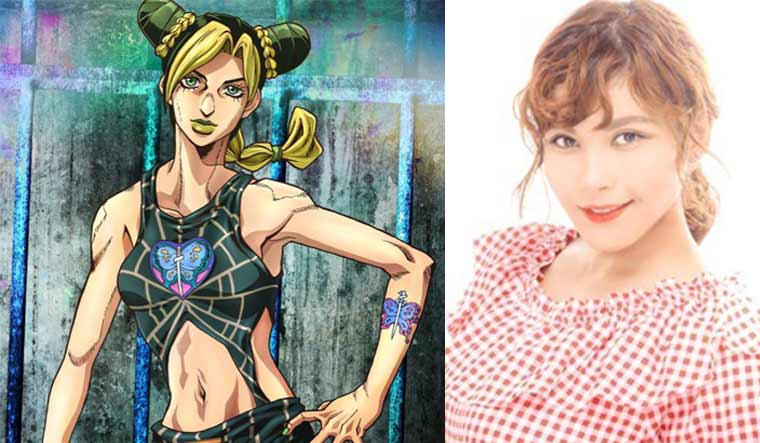 Showing all of the titular JoJo protagonists, the clip ends with a brief shot of how Jolyne Cujoh will look in season five of JoJo’s Bizarre Adventure by David Production. Jolyne, daughter of Stardust Crusaders protagonist Jotaro Cujoh, will be the first female “JoJo” in the series.

The clip, short of details like a release date or the total number of episodes planned, uses the same soundtrack as Jotaro’s from part three. However, at the end of the clip, Jolyne’s voice actor can be heard uttering her own rendition of Jotaro’s iconic line, “Yare Yare Dawa” (give me a break/good grief).

It has been confirmed that Ai Fairouz will be the voice actor (VA) for Jolyne in season five.

The casting is a dream come true for the young 28-year-old voice actress, who developed her interest in anime and manga after reading JoJo’s Bizarre Adventure in junior high school. Born to a Japanese mother and an Egyptian father, Fairouz was named after a Lebanese singer.

She was raised bilingually and knows both Arabic and Japanese, having completed elementary school in Cairo, according to an interview on the Japanese site WebNewType.

Fairouz began her stint into the anime industry by participating in reading sessions of Stone Ocean via Skype, receiving good feedback for the same. That inspired her to become a voice actor. Interestingly, in the interview, she says she wanted to voice the character “Foo Fighter”, an initial villain and later supporting character in part six.

Fairouz has voiced characters like Hibiki Sakura in How heavy are the dumbbells you lift and Emily Orange in Kandagawa Jet Girls and Eripiyo in If my favorite Pop Idol made it to Budokan, I would die.

Interestingly, Fairouz won’t be the first person to voice Jolyne. In the videogame adaptations released so far, Jolyne has been voiced by Miyuki Sawashiro.

JoJo'z Bizarre Adventure is among the most iconic anime series of all time. The manga by Hirohiko Araki has been running since 1987, with each part undergoing several stylization changes and plot rejigs. Originally a vampire horror story about Jonathan Joestar and his adopted brother Dio Brando, the series developed into a supernatural fantasy miasma, with part two and three exploring adventure film territory, part four adapting to a slice-of-life style, part five being a mafia gangster drama set in Italy and part six being (partially) a prison breakout story.