Celebs in the time of COVID-19: While Big B gets trolled, Shah Rukh turns myth-buster 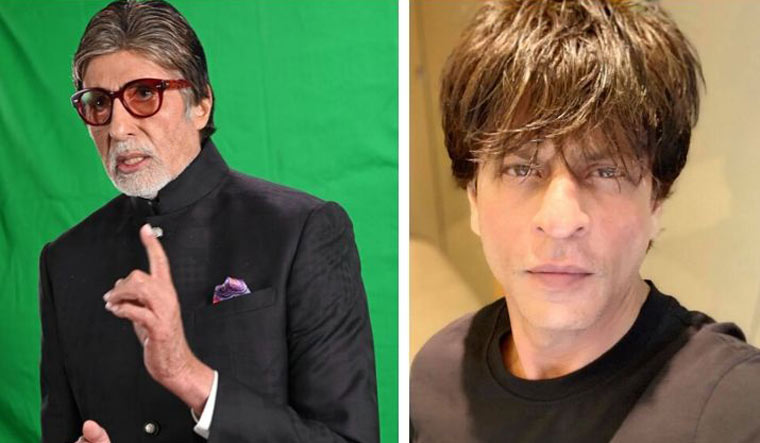 A fortnight ago, on the eve of Holi, two people against the backdrop of ‘holika dahan’ pyre being readied for the ritual, had an intense conversation. One of them seemed to be really bothered about the spread of COVID-19. At that point in time, in India, the number of cases were few and on the rise, but not enough for the authorities to act upon with stringent rules. The second person had his own theories, which he believed to be true and was ready to do anything to prove.

The idea of 'holika dahan', he believed, was to kill the evil and once the pyre was burnt, “the corona would vanish”. He was ready to guard the theory with his life even when the other man insisted on science and gave him examples of what was happening in China and Italy. The believed myth was stronger than any scientific logic. Thankfully, it was a conversation in remoteness and not many were privy to it.

But on March 22, one of the most followed Indian celebrities of Twitter with 40.5 million followers, tweeted something that is not just mythic in nature but also a risky affair in such critical times. Amitabh Bachchan, took to Twitter to write: “T 3479 - AN OPINION GIVEN :5 pm ; 22nd Mar, 'amavasya', darkest day of month ;virus, bacteria evil force at max potential & power !Clapping shankh vibrations reduce/ destroy virus potency Moon passing to new 'nakshatra' Revati. cumulative vibration betters blood circulation (sic).”

The tweet came after a large population of India came out to their balconies to clap, make sounds with pots and pans, and blew conch shells after being prodded by the Prime Minister during his speech on Thursday.

The tweet, in the meantime, met with criticism with many even reporting it to Twitter authorities for spreading misinformation and a plea being made to take it down. The tweet has now been deleted.

But as they say, the universe is a great balancer. And hence for this one tweet of Bachchan that may be successful in spreading myth that we should be scared of, there are influencing people doing their bit to bust the myth in the times of COVID-19. And, this is not just celebs taking to the gimmicky hand-wash challenge and posting videos of washing hands.

One good example is the five-minute video uploaded by Shah Rukh Khan on his social media accounts. “InshaAllah #JantaCurfew will help against the spread of virus, though we may have to do this again. The clapping brought so much cheer. So a reminder of safeguards, with some cheer... Pls take it in the right spirit. To all relentlessly working today - Extremely Grateful. Thx!” he wrote along with the video.

In the video, in a step-by-step manner, Khan busts myths associated to the virus and tells his audience about the right way to be, the right things to do, and the distances to maintain. The video, with scenes and songs from his films added at intervals, makes the messaging funny and reachable. It is an extension of the inimitable humour that Khan himself has.

InshaAllah #JantaCurfew will help against the spread of virus, though we may have to do this again. The clapping brought so much cheer. So a reminder of safeguards, with some cheer... Pls take it in the right spirit. To all relentlessly working today - Extremely Grateful. Thx! pic.twitter.com/2wfaXPlFVF

Actor Kartik Aaryan may have got a lot of criticism for women-bashing in his films, especially the monologue, which has been criticised for being really misogynistic, in Pyaar Ka Punchnama (2011). That clip, which became viral in the following months after the movie released, has been instrumental in making him the star that he is today. A few days ago, Aaryan, following the template of the monologue, posted a video of dos and don’ts in the time of COVID-19 with all the medical and scientific aspects intact. Over the last few days, he has won appreciation from many in the Twitterverse for doing the right thing.

YouTuber Bhuvan Bam, who has created some skirting characters for his sketch BB Ki Vines, made good use of the characters to smash the WhatsApp forwards that have been instrumental in spreading myths. In the COVID-19 special sketch, he analyses things like how messages that say drinking hot water regularly can stop the spread of the virus, or paracetamol and ibuprofen can cure it, or holding your breath for 10 seconds without coughing ensures that you are virus free that have widely spread in WhatsApp family groups, are wrong. His video also looks down on the persistent parents who are yet to realise the threat that the novel coronavirus poses on humanity at large. The video has not just become popular but has also been shared by legit health foundations’ accounts.

As the newspaper industry looks at uncertainty as well, one can only hope that the tribe of people busting myths grows more than the ones spreading it.