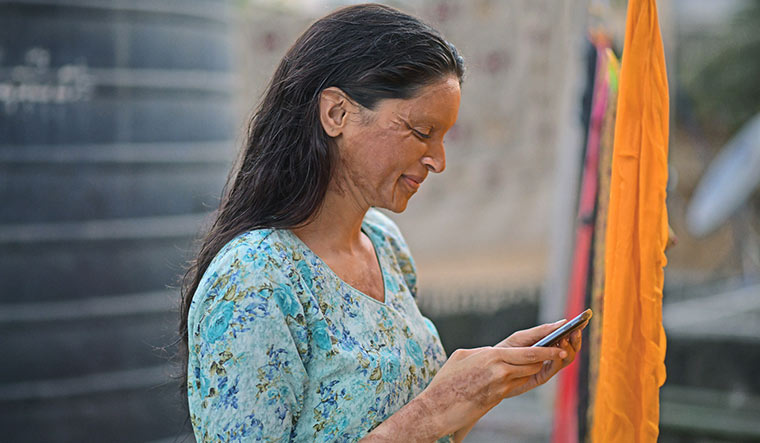 The Delhi High Court on Saturday restrained the makers of Deepika Padukone-starrer Chhapaak from screening the film without giving credit to the lawyer,who represented acid attack survivor Laxmi Agarwal on whose life the movie is based, for inputs she shared with them.

The court directed film director Meghna Gulzar and producer Fox Star Studios to acknowledge advocate Aparna Bhat in the opening credits by including the line—"Inputs by Ms. Aparna Bhat, the lawyer who represented Laxmi Agarwal, are acknowledged".

For theatres where digital copies are provided, the condition will come into effect from January 15, and where physical copies are supplied, the changes shall be carried out with effect from January 18. "The defendants (film makers) are restrained from releasing the film 'Chhapaak' on any electronic medium/s such as cable television, home viewing, DTH platforms, internet entertainment or streaming services, etc., without acknowledging the name of the Plaintiff, in the opening credits..., Justice Prathiba M Singh said in the order.

The court passed the order on a plea by Fox Star Studio, producer of the movie which was released on Friday, challenging a trial court's Thursday order asking them to acknowledge the contribution of the advocate.

The high court modified the acknowledgement of the trial court which had directed that the film Chhapaak carry the line "Aparna Bhat continues to fight cases of sexual and physical violence against women during the screening of the film".

Regarding the theatrical exhibition, the court said since the film has already been released on January 10, both internationally and in India, to ensure that there is no disruption in the screening, it is directed that the film shall not be exhibited in theatres with effect from January 15 without adding the credit to the advocate to the digital copies. In the theatres where physical copies of the film are to be supplied by the producer, the changes shall be carried out with effect from January 18, it said.

"Clearly, from the initial screenplay, which was to acknowledge both Laxmi Agarwal and the plaintiff (Bhat), the complete absence of any mention of the plaintiff's name anywhere in the beginning or in the end credits would constitute reneging from the promise. A perusal of the credits shows that a large number of contributors have been expressly acknowledged, Justice Singh said. The court said the advocate was not the author of the script or the screenplay. However, she has given inputs in them which could be considered to be those of an expert or a professional having expert knowledge, both in the legal journey of the victim and also in general.

For whatever reason, she had clearly altered her position based on the representations made by the film-makers and had not insisted on a written contract, maybe owing to the fact that she considered this to be a social cause and in view of their stature, it said.

The court noted the film-makers do not dispute that the advocate was approached and consulted by them and she had not merely provided them all the help in terms of history of criminal trial and the public interest litigation which was filed but also provided documents and explained the nuances of litigation processes and corrected the script. "She has, therefore, helped in maintaining the integrity and the credibility of the film itself, in respect of the legal journey of the victim.

"The lead producer/ director has in fact acknowledged the same without any hesitation, both in communications and even in the counter affidavit that has been filed before the court.

"Under such circumstances, it cannot be held that the plaintiff is not entitled to any interim relief at this stage. Accordingly, while the acknowledgement given by the trial court may be broad, the plaintiff deserves to be recognised for her 'some part' in the making of the film, it said.

The court said in the absence of a contract and payment of consideration, the advocate's efforts, skill and labour cannot vest with the producer completely gratuitously. She at least has a right to be recognised and acknowledged, to which the producer/ director had willingly agreed since the beginning of the project, it said.

The high court said the advocate did not expect any monetary compensation for her role in the film and the acknowledgments given to various professionals in the film and the addition of Bhat and her contribution would not put the producer to any inconvenience, apart from modification of one slide of the opening credits. "The text of the acknowledgement, which has been directed by the trial court is extremely broad, and in fact may not be appropriate considering that the Plaintiff is a practising lawyer.

"However, this should not deprive the plaintiff from having her role recognised in the making of the film. There are various other professionals who have already been acknowledged in the credits of the film, it said.

During arguments on Friday, Gulzar's counsel had said there was no contract between the parties and seeking inputs did not confer any legal right on her to be acknowledged. The film producer's advocate had said the trial court did not hear them before passing an order and an ad-interim ex-parte injunction was passed which is unusual.

The counsel for Bhat had said she had fought the case for Laxmi pro-bono and was not seeking any publicity and she was approached by Gulzar to get some authenticity in the movie.

He had said that Bhat's assistance was based on her communication with Gulzar that her contribution would be acknowledged. The film producer challenged the trial court's order before the high court saying it was passed one day before the release of the film and if not vacated or modified, it will cause grave injustice and irreparable harm.

The producer sought setting aside of the trial court's injunction order, saying it was passed without any notice or summons issued to them and they were not given an opportunity to contest it.

Bhat, in her plea before the trial court, had said that despite representing Laxmi in courts for several years and helping in the movie making, she was not given credit in the movie. She had said the film-makers took her help in the entire process of writing and shooting the movie, but did not give the credit.