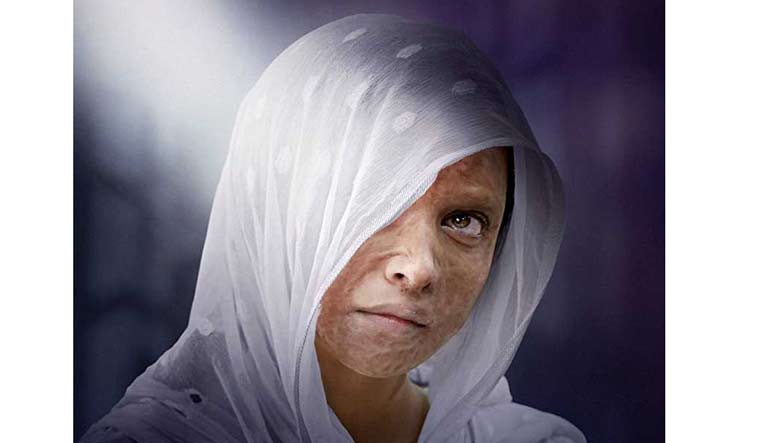 It’s December of 2012. Protests are on in Delhi. A gang-rape, now popularly known as the Nirbhaya case, has happened. People want answers. In the midst of the rape protests, a man with a photo of her daughter, her face disfigured with acid, goes in front of news cameras seeking help, trying to make people aware of what happened to his daughter. In a following scene, shot in a public bus, in Meghna Gulzar’s Chhapaak, people discuss how the rape victim may die. “Sarkar gir jaayegi,” one person says. “Uske liye marna jaruri hai kya?” asks Amol Dwivedi (Vikrant Massey), an activist fighting for the rights of acid attack survivors. The camera pans to the survivors with him. The film’s gaze is not sympathetic, but introspective. The tone that is set early on continues throughout and that becomes its victory.

As it goes along, it makes Laxmi Aggarwal’s heart-wrenching story of being attacked by acid as a teenager by a man, her neighbour double her age, as the anchor. The focus of the story is not on the broken dreams and the miserable life the survivor leads because of the disfiguring caused by the splash of acid by a rejected suitor, Naeem Khan, but on the strength and the will to fight. Laxmi, in real life, made headlines for the cases she fought with all her might—one with the attacker, and another to ban the sale of acid. She set an example.

So does Deepika Padukone, who reprises the role of Laxmi as Malti. She is not just honest in the portrayal, but also far from any of the roles she has played so far. Padukone’s first introduction in the film is when she has already lived with the attack (by Bashir Khan aka Babboo) for several years, with the disfiguring and the scars it has left on her, not just physically but emotionally, too. The things it has stripped her off—of not being able to wear the vast collection of earrings she has, getting a job, having a romantic life, the agonies of the constant court battles, and just the right to have a happy life. But she laughs, and laughs often and wins everything that she has lost with her resolve. With the one message coming out that it’s not easy to break a woman by taking away her beauty.

It is easy for a film like Chhapaak, highlighting an urgent social issue, to get trapped and look at its subject with a “poor girl” glare. But the fact that it does not, and rather focuses on the moments where Malti leads and refuses to give in, makes it stronger. In the same vein, it never lets Amol become the hero. It was easy to train the lens on the man who fought for the women and saved them. But it is the women who are fighting here. And while Amol’s contribution is counted, it is never over-emphasised. Massey has to be applauded for the distinction he brings to Amol’s character, often acknowledging his flaws.

Besides superlative performances by each of the actors, including Padukone and Massey, the film’s strength is also in these moments when it makes subtle observations about smaller things that matter. For instance, after a court case when people from the media surround Malti and her lawyer, personal questions are posed. There has been enough media bashing in films, but here a balance is shown. When one person gets too personal, there is another pointing it out. Another is the portrayal of Laxmi’s lawyer, Aparna Bhat, played with a lot of nuance by Madhurjeet Sarghi, which gives an added dimension to the film. Sarghi is never screaming in front of the judges, but still able to put her point across, at the end winning every case that she fights along with Malti. At home, she is supported by a husband (Anand Tiwari) who understands and does not shy away from taking added responsibilities—of raising a kid, or of being a sport when his wife has to leave in between a birthday party.

Meghna, as a director, has often brought out the dichotomies of the society, the psyche of people, through her film. She often makes a point that for every bad person, there is a good one as well. In a script written by her along with Atika Chohan, she ably does that here, too. And it only makes sense to put it out there: in one scene it is made loud and clear that every person is different and so will their reactions be to the same situations.

And then, there is Gulzar’s lyrics— 'Chhapaak Se Pehchaan Le Gaya'— sung beautifully by Arijit Singh, that plays often and leaves you haunted by what the gory crime can do. Chhapaak is an extremely powerful story of women’s victory with utmost sensitivity. It is a story of the spirit and valour that women have to live with day in and out.