Sensational to sensitive: How portrayal of mental health changed in cinema 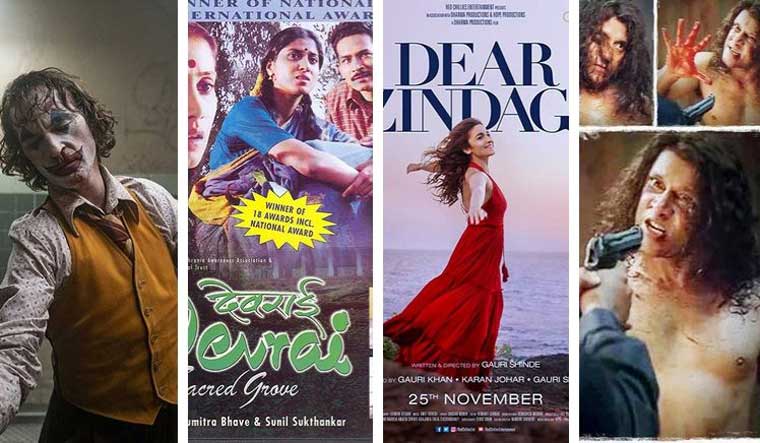 For the longest time, mental health in mainstream cinema was mainly about all kinds of crazy, but that has changed slowly and surely with nuanced portrayals of a spectrum illness that goes from being troubled and depressed to bipolar disorder and Alzheimer's.

With the stereotype of a mentally ill person raving and ranting giving way to films that don't demonise the condition, it is no longer about shock treatments and straitjackets, but also about therapy and sensitivity.

Hollywood biggie Joker, which released in the week that the world observes Mental Health Day on October 10, walked right into the debate with Joaquin Phoenix's unsettling performance as Arthur Fleck, a mentally-ill man who spirals into madness.

The role sparked a lot of negative buzz over its treatment of mental health with critics pointing out that it stigmatises the problem.

Hollywood has also given films like A Beautiful Mind about a schizophrenic mathematician, Rainman about autism and Still Alice that focused on Alzheimer's.

Bollywood has opened the windows of its mind too.

Its A-lister Deepika Padukone has spoken about the stereotypical representation of the disease that forces people to stay silent rather than seek help.

Gauri Shinde's Dear Zindagi (2016) is that rare film in which the protagonist (Alia Bhatt) is troubled and out of sorts. It takes a gentle therapist (Shah Rukh Khan) to talk her out of her issues and help her refocus on her life. It eased the audience into developing acceptance about depression and telling us that seeking help is not a matter of shame.

"There is an attempt to have a more sensitive portrayal of a certain condition and not demonise mental illness and condition. People who suffer from any of this need more love and sympathy than prejudice. There is a change towards the better where we talk about it, we are trying to break the shame around it," said Kanika Dhillon, the writer of Judgementall Hai Kya.

The film was earlier titled Mental Hai Kya. The title itself sparked a massive debate with many viewing it as a taunt.

The film was rechristened after members of the Indian Psychiatric Society (IPS) wrote to the Central Bureau of Film Certification (CBFC), seeking a change in the title as they found it "derogatory and demeaning" to mentally ill people.

However, several viewers said the film about a woman who drifts between reality and illusion is a sensitive portrayal of mental illness.

The Aparna Sen-directed 15 Park Avenue (2005) depicted Konkona Sensharma as a schizophrenic woman on a quest to find her imaginary family living in Kolkata also got plaudits for its depiction.

"I have a very close relative who is schizophrenic. I have seen it from very close quarters. It is more common than we think and people do not like to talk about it and that's why one does not get to know about it," Sen told PTI.

Mahesh Bhatt's Woh Lamhe released the following year was reportedly based on Parveen Babi's life, her real life battle with schizophrenia and her relationship with the director.

Schizophrenia again emerged at the centre of a film with Farhan Akhtar playing a man with the disorder in 2010's psychological thriller Kartik Calling Kartik, which garnered mixed reviews and tanked at the ticket window.

There have been many films in the past that would be deemed problematic today.

In fact, Hindi cinema has often been at a loss when it comes to dealing with people termed 'abnormal' and their categorisation as hysterical, crazed or funny.

In the 1970's Khilona, Sanjeev Kumar played Vijay, a man who loses his mind after his beloved commits suicide and one day in a fit of madness sexually assaults Chand (Mumtaz), a courtesan pretending to be his wife to help him "improve" his mental health.

What is disturbing is that Chand becomes close to Vijay. With his health on the mend and a baby on the way, Chand is accepted into the family after its found she is of noble birth.

In the 1980s came Baseraa which saw Rakhee's character playing a woman who loses her mind after a shock and sent to a mental asylum. It is a monochromatic portrayal with little or no nuance.

Khamoshi in 1970, starring Waheeda Rehman, Dharmendra and Rajesh Khanna, focused on a nurse, working in a psychiatry ward, who falls for her patients twice and in the process ends up becoming emotionally deranged.

Regional cinema has been better. The 2004 Marathi film Devrai, directed by Sumitra Bhave and Sunil Sukthankar, is considered one of the most nuanced and realistic portrayals of schizophrenia.

Bhave believes the depiction is changing for the better though the stigma still persists.

"Mental health can create deep agony for the person who's suffering. If you're tackling this subject on screen, it has to be presented in a subtle way," she said.

Back in 2005, the Tamil hit Anniyan shed light on dissociative identity disorder (DID), a mental illness characterised by at least two distinct and relatively enduring personality states.

Akshay Kumar-Vidya Balan's blockbuster Bhool Bhulaiyya also dealt with DID, albeit with a touch of humour.

Similarly, films such as Barfi, starring Ranbir Kapoor, and Shah Rukh Khan's My Name is Khan dealt with autism and Asperger's syndrome, a development disorder in a positive vein though not they are not completely accurate.

"Now people have started talking about depression and anxiety as they believe there is no taboo anymore. When they see someone suffering from any disorder, they are more accepting towards that person," Dr Aditi Kaul, assistant professor, School of Liberal Arts& Human Sciences, Auro University, Surat, told PTI.