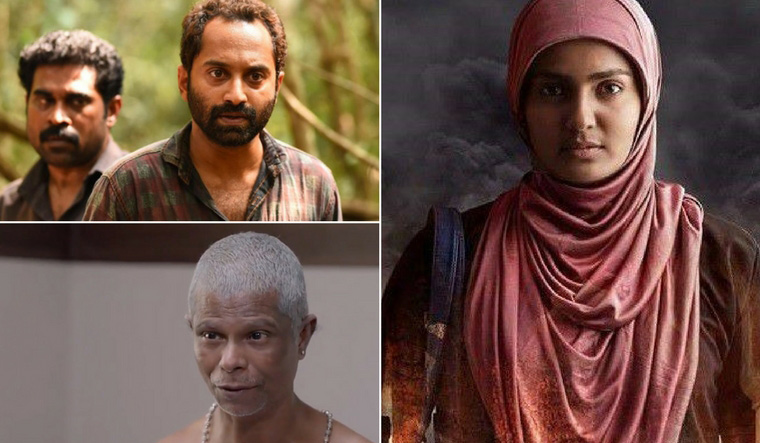 As filmmaker Shekhar Kapur announced the award for the best Malayalam film at the 65th National Film Awards, he fumbled. The jury chairman just couldn't get the name right—Thondimuthalum Driksakshiyum. As those around broke into chuckles, he gave up, and helplessly spelt it out. This was just the first instance. By the end of the announcements, he had managed to pronounce in a not-so-perfect, funny way of his own, because this Malayalam film bagged quite a few awards.

When he finally announced Malayalam actor Fahadh Faasil's name as recipient of the Best Male Supporting Actor award for the same film, it was evident he was clearly in awe of the film. An eloquent Kapur spoke about Thondimuthalum Driksakshiyum, its brilliant plot, spectacular direction, screenplay and acting by the cast.

The emotionally-intense Aalorukkam follows a 75-year-old Thullal artist who sets out in search of his son who left home 16 years ago. Actor Indrans, for his spectacular performance in the film, bagged his first state award for best actor recently. Indrans narrowly missed the national award for best actor, and was a strong contender, said Shekhar Kapur.

Santhosh Raman also bagged the award for Best Production Design for Take Off. While director Jayaraj bagged another award for Best Adapted Screenplay for Bhayanakam, Nikhil S. Praveen brought home the award for Best Cinematography for the same film. The film, based on a chapter in the epic novel Kayar by Thakazhi Sivasankara Pillai, tells the story of Kuttanad in the pre-Independence era when youngsters, in large numbers, joined the army to fight in World War II. Aneez K. Mappila's The Slave Genesis, based on the Paniya community of Kerala's Wayanad district, won the award for Best Anthropological film in the non-feature film category.

“I didn't know such great films were being made in regional cinema," Kapur said as he announced the awards. “Hindi cinema cannot compete with them,” he added.

The great show by Malayalam films at the national level is a thumbs-up for good cinema—films that move away from mere commercialisation, superhero star cast, masala entertainment, and focus on raw emotions and grassroot level stories. The emotional turmoil of nurses stranded in war-torn Iraq, sly tactics of a chain-snatcher, real-life scenes from a police station that subtly point a finger at the system, or the jinxed postman who delivers news of war and death to villagers—all these strike a chord with the audience.

“I have to tell you, I will talk to you about a Malayalam film. I have never seen performances like that. You watch any Hindi film, if you watch two Aamir Khan films one after the other, you will know that both are Aamir Khan. I used to watch Malayalam films and halfway through, I used to think that I have seen another film in which this main actor was a wife beater and a rapist and in this one he is a victim. Then I realise it’s the same actor,” Kapur said.

“Malayalam film is so rooted, that’s why they are able to do it,” he said.