With GST and pollution debate, future looks grey for Sivakasi 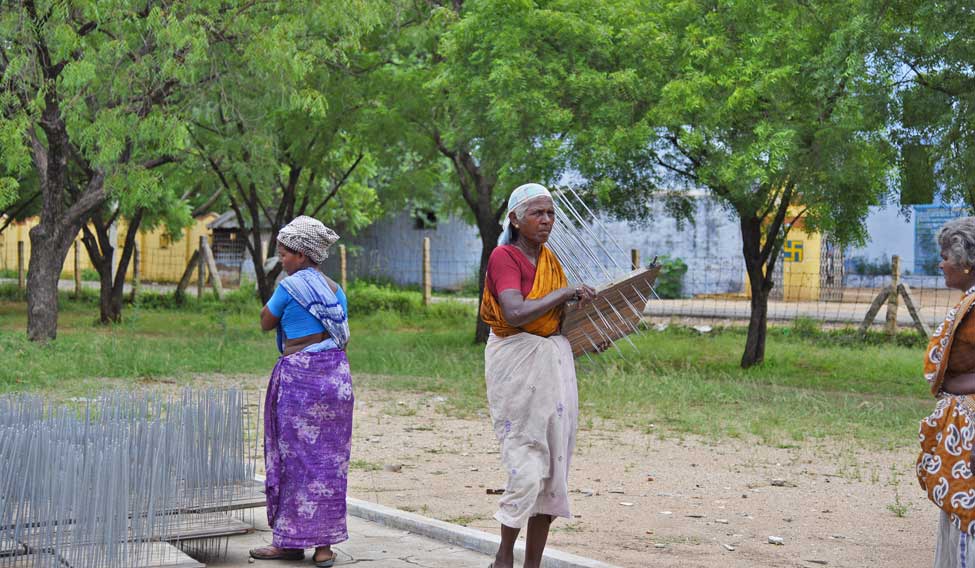 “These are lean days, Madam. Now that Diwali is almost here, most of the production works are over for this year,” says Damodaran, who was taking me around a firecrackers production centre in Sivakasi. Damodaran is a supervisor there, and a few moments with him at the production facility was proof of the multi-tasker that he is. Damodaran was explaining the various processes of production, even as he took instructions from the walkie-talkie fixed in his pocket, while giving orders to around 25 workers who were involved in making sparklers that day.

Watching the labourers work in the firecracker unit is not a pleasing sight. Chemicals are mixed with bare hands, even without the protection of a pair of gloves. It is far from exaggeration if one describes the labourers as skinny skeletons with an occasional pound of flesh. Almost all of them have a shiny, silver-ish complexion, due to years of close contact with these chemicals. “Isn’t it harmful for your skin?” I ask one of the labourers as he meticulously mixes aluminium and barium nitrate with his hands. “I’ve been doing this for 10 years. Nothing has happened till date,” he replies, but with a tinge of uncertainty.

This is not a rare sight in Sivakasi, a town in Tamil Nadu’s Virudhunagar district which has over the years become synonymous with production of firecrackers. Add to it the fact that fireworks has been a sector which has seen little or zero automation in India. The reason--machines are expensive compared to the cheap labour that Sivakasi offers in abundance. The small town is a perfect example of an unorganised sector in India.

The town employs at least a million people in the fireworks sector. In addition, about ten million lives are directly or indirectly dependent on businesses from this small town throughout India.

2017 has not been good for the people here. The year itself began on a tough note with the unprecedented disruption caused by demonetisation.

It took about six months for small traders to resuscitate from the note ban shock, as sales got impacted during Vishu, one of the prominent festive days in the first half of the year.

And soon, as lives started getting back on track, there was the second disruption caused by the Goods and Services Tax.

Under the GST, firecrackers have been covered in the luxury bracket, taxed at 28 per cent. The larger businesses, with more than an annual turnover of Rs 1.5 crore, were already paying about 27 per cent under the Central Excise Tax and local taxes, prior to the GST. While these firms were able to absorb the GST shock, the smaller firms saw the taxes increase from about 16 per cent to 28 per cent.

As a result, production decreased by 20-25 per cent this year. “There are problems that we face due to the GST. We have requested the government to bring the taxes down to 12 per cent because firecrackers are not luxury goods. In India, people use firecrackers to celebrate anything from birthdays to weddings to anniversaries,” says P. Ganesan, Director, Vinayaka Sony Fireworks Pvt Ltd. “The government is receptive of our grievances,” he adds, hopeful that the bracket will be revised.

On the contrary, the Supreme Court move reinstating the ban on sale of firecrackers has had little impact on firms here because most of the stocks were already sold off to dealers in Delhi-NCR by the time the ban was declared. However, this may affect sales the next year, with dealers anticipating more bans in the future.

Add to this, the already heightened discourse on air pollution. Even as the industry argues that firecrackers cause only 0.3 per cent of the current pollution in the country, the current debate might not hold good for the sector.

The future of the industry does not look promising. If the government does not address the GST concerns of the traders, the businesses would look to cut costs by sacking the workers, which will prove disastrous for the thousands of workers in the town.

The larger companies are also contemplating to bring in automation to the sector in case expenses rise. While the working conditions definitely needs to improve, the imminent threat of mass unemployment looms large in Sivakasi.

Your form could not be submitted.
This browser settings will not support to add bookmarks programmatically. Please press Ctrl+D or change settings to bookmark this page.
Topics : #GST | #Pollution