Government has claimed there's no threat to food security 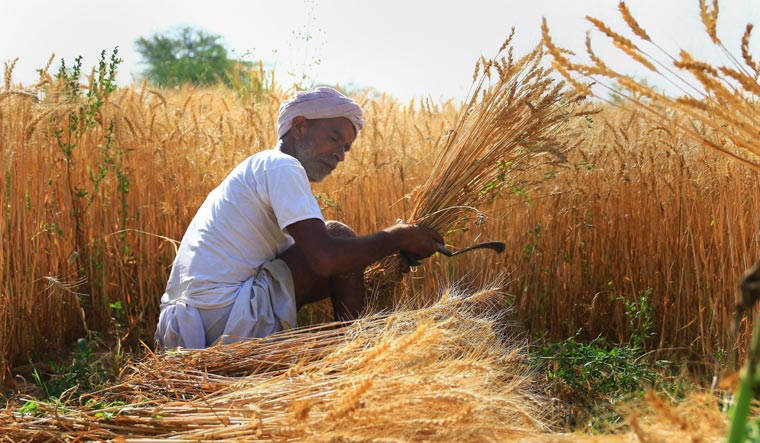 On May 9, the all India average atta (wheat flour) retail price per kilogram was reported at Rs 32.91—over 14 per cent jump since last year, and highest price in over a decade. The price has been steadily rising due to lower production, and higher export of wheat.

While the farmers are getting higher price in the open market due to increased demand for their wheat crop, the consumer have started to feel the pinch. The cost of wheat-based products like breads, biscuits is expected to go up in the coming months. The government has claimed that there was no threat to the food security of the country as there were sufficient stocks, the rising prices pose a threat.

Why are prices rising?

The Ukraine war has impacted the wheat supply as both Russia and Ukraine account for 28 per cent of the world wheat exports. This drove up the prices in a country largely dependent on exports from these warring countries. The focus shifted to India as exports are rising. This led to private players procuring wheat from the open market giving a better deal to the farmers.

The wheat production has been low in India due to early onset of summers. Moreover, as many farmers hope to get price price than the MSP in the government designated mandis, are holing on to their produce. This has led to lower wheat procurement by the government agencies. India would have surplus wheat even though production was expected to touch 1,050 LMT, slightly lower than the initial estimate of 1,110 LMT in financial year 2023.

“This year due to an increase in market prices and higher demand by the private players, both for the domestic as well as export purposes, the purchase by the government agency is less. But that goes in favour of the farmers. Farmers are getting a good price for the wheat. Earlier the farmers had no option but to sell to the government. Now, they are selling only that quantity to the government which they are unable to sell in the private market. Therefore, from that perspective, the government procurement has reduced,” Sudhanshu Pandey, Secretary, Department of Food and Public Distribution, said last week.

Will it impact food security?

As government provides free grains to over 80 crore beneficiaries under the PM Garib Kalyan Yojna and national food security act, in order to tide over shortage of wheat grain, it is replacing wheat with rice to the beneficiaries. A reallocation order under which 55 LMT additional rice has been allocated in place of wheat in PMGKY.

“Our rice procurement last year was about 600 LMT and this year same figure is expected. Our annual requirement for NFSA is roughly about 350 LMT. So, we are in a surplus situation.” Pandey said. The government is shifting to fortified rice to the entire Public Distribution System (PDS). It is starting with distribution of fortified rice covering all aspirational and heavy burden districts and ICDS and PM Poshan.

As global demand for wheat is growing, the government is keen to continue the exports. In the last fiscal, 70 LMT wheat was exported. Till now, 40 LMT wheat has been contracted for export and about 11 LMT has been exported in April 2022. After Egypt, Turkey had also given approval for import of Indian wheat. Pandey said that from June, wheat from Argentina and Australia would start arriving in the international markets, so this was the opportune time for exporters for sell wheat in the international markets. This will help Indian farmers and traders get higher prices, but drives the price higher for local consumers.

To control the prices of items like bread, biscuits are other wheat-based products, the government used to allow wheat sale to private companies through the Open Market Sale Scheme. This helped keep prices in check. Last year, government allowed 70 LMT of wheat sale through this scheme. However, this year, it is yet to allot wheat under this scheme. The allotment will depend on the final procurement of wheat across India by government agencies. If no allotment is made under this scheme, the manufactures have to buy it from open market, thus driving up the prices.