Many promising businesses lost momentum and closed down 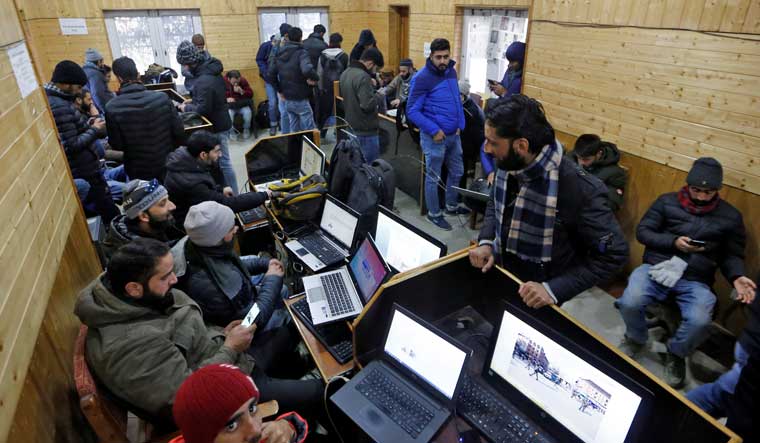 Two years ago, when Article 370 was revoked and Jammu and Kashmir was split into two Union territories (UT), the Centre imposed a security and communication blockade on Jammu and Kashmir. While the security lockdown was eased slowly, internet services remained suspended for 18 months. As a consequence, Jammu and Kashmir’s economy took a huge hit, and many promising businesses lost momentum and closed down.

Landline phone connections, mobile services and internet in Kashmir were suspended a day before Article 370 was revoked by the BJP-led government on August 5, 2019. For weeks, Kashmir was cut off from the outside world. Facing criticism, the government then restored landlines in Jammu and later in Kashmir after some weeks. 4G internet services, however, remained suspended and were restored only after the Supreme Court on January 10, 2020, ruled that access to the internet is a fundamental right under Article 19 of the Constitution.

The court’s ruling came in response to a petition filed by Foundation for Media Professionals, a non-government organisation. Earlier, the apex court had directed the Jammu and Kashmir administration to review restrictions on mobile internet speed in the Union territory.

Finally, by the time the high-speed internet (4G) was restored on fixed-lines and mobile phones, scores of businesses that depended on the internet had closed down.

“Before the internet was shut, our business was booming and we had 40 employees,’’ said Khalid Ahmed, who ran a call centre in Srinagar. “ We used to design websites with our partners in the US for Time Warner and provide back-end support to Dish TV in Kashmir,” Ahmed said. He said during the 2016 agitation after Hizbul Mujahideen commander Burhan Wani was killed, the business suffered some losses but didn’t shut down.

“Our partners in the US also suffered because of our inability to communicate with them and provide support’,’ he said. “When the internet was restored... our business folded up.” He said he had started the business by selling his flat in Delhi below market price.

“Those who bought my flat gave me Rs 1 lakh extra than the negotiated price,’’ he said. “After my business was shut down, I fell into depression and then went to a faith healer to recover,” Ahmed revealed. He said if the internet had not been snapped, his business would be booming. “Now many of the employees have changed jobs. One of them, who was our manager, is driving a load carrier and another is selling crockery in a mobile van.”

He said most of the 30 registered call centres and business processing units dealing with information technology-related business either shut down, shifted to Delhi or changed sectors due to internet suspension after Article 370 revocation.

For Syed Ahfaq, a former banker, who ran a successful financial consultancy service, internet disruption resulted in him being forced to vacate his four-room office to a one-room facility and a reduction from a 15-member staff to one. “We used to provide back-end support to mobile service companies apart from dealing with taxation and online trading before the Article 370 event. After that, I am struggling to survive and am looking for a job,’’ he said. He said the disruption due to the internet shutdown hit many promising start-ups and most have been unable to revive.

One of the biggest casualties of the internet suspension in Kashmir was tourism. “Today, the internet is an integral part of tourism,’’ said Tariq Paltoo, a houseboat owner and Dal Lake conservationist. “We used to get booking through email and WhatsApp but when the internet was shut, we couldn’t communicate with our clients after the security lockdown was eased,” Paltoo said.

He said the government provided the internet facility for houseboats and hoteliers at the Tourist Reception Centre but that didn’t help much. He said after 4G was restored, they started connecting with clients but due to COVID-19 pandemic, the tourist arrivals are far less.

“Last winter, the tourist influx was very good, but it was restricted mostly to Gulmarg and Pahalgam,’’ he said. “We were expecting a bumper summer, but the second COVID-19 wave has played spoilsport.”

Wahid Mali, president of Kashmir Hotel and Restaurants Owners Federation(KHAROF), said the internet restoration, especially the fibre-based technology, has smoothed the dealings with clients. “The first thing the guest enquires is whether our hotel has Wi-Fi connectivity,’’ he said. “Some guests have kids with them and they like to play games on mobiles.”

He said most high-end hotels in Kashmir are doing regular business as they get clients who are avoiding international tours due to COVID.

“We have about 40,000-plus middle- and low-budget hotels in Kashmir and right now they have no business due to COVID,’’ he said. “We are getting only 1,200 tourists who look for low-budget hotels and that is not enough.”

Many small businesses that used mobile apps and social media to market their products are slowly reviving their business.

Among the worst victims of the internet shutdown for 550 days in Kashmir were the students. Hundreds travelled to Jammu and Delhi to fill forms for different examinations and apply for admissions with their parents. “I travelled to Jammu with my daughter as she had to apply for admission in different colleges outside Kashmir,’’ said Muhammad Ayub of Srinagar. “Now the situation is much better as such things can be done by sitting at home.”

“Now most of them are able to attend online classes,’’ he said. “ The restoration of the internet firstly helped people to update their systems and mobiles and it has made it possible to hold webinars and other programmes for the students and teachers.”

There is agreement in Kashmir the longest-ever internet disruption scuttled many promising businesses and most of them couldn't be revived after the internet was restored. There is, however, hope that once the COVID is fully controlled, Kashmir’s economy, which lost Rs 40,000 core and 5 lakh jobs from August to October in 2019, will register growth.