Performance of Indian stock market in 2020 and expectations from 2021

What can we expect from the Indian stock market in 2021? 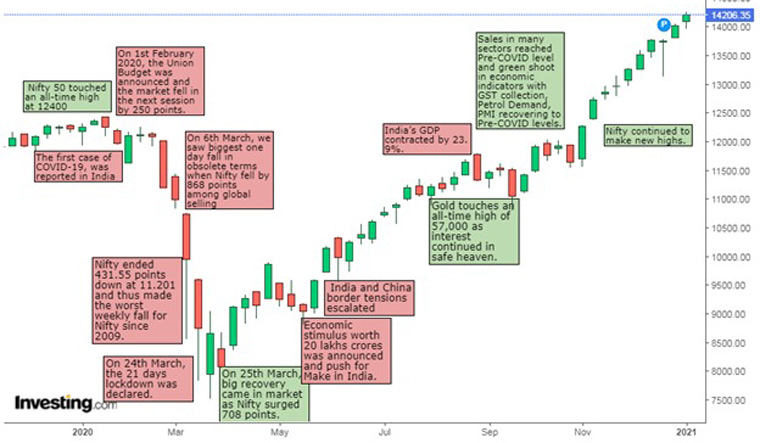 4. On March 6, we saw the biggest one day fall in obsolete terms, when Nifty fell by 868 points amid global selling.

10. Economic stimulus worth 20 lakh crores was announced, along with a push for Make in India.

11. At the end of May, India and China border tensions escalated.

12. At the beginning of August, gold touched an all-time high of 57,000, as interest continued in safe havens.

14. In the month of October, sales in many sectors reached the pre-COVID levels and green shoots appeared in economic indicators, with GST collection, petrol demand and PMI recovering to pre-COVID levels.

15. In the months of November and December, Nifty continued to make new highs.

16. Despite all the above events, Nifty has climbed higher, especially at the end of the year, and gave us some signals on what lies in the year 2021.

It is expected that in the year 2021, the Indian economy would return to normalcy. In the first few months of 2021, certain events like the COVID vaccination, the Union Budget, and the US government’s new policies will be key driving factors.

This New Year we can also expect to see the stock market and economy align with each other. Also, there are many IPOs including that of Indian Railway Finance Corporation, Indigo Paints Ltd and, Home First Finance Company India Ltd that will greatly benefit the overall Indian economy, and will also provide capital to the companies which will drive the overall Indian economic growth.

The author is managing director of StockEdge