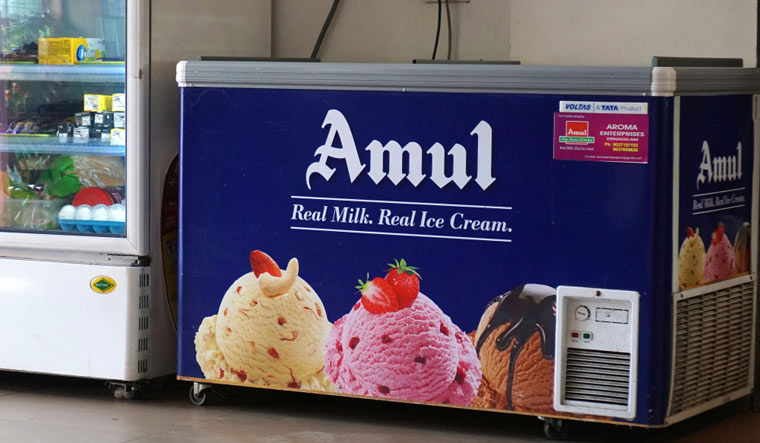 As the country went into a near complete lockdown from March 25, barring only essential goods, markets closed, restaurants and shopping centers shutdown, and most factories also had to suspend operations. This affected sales growth of most companies. However, Gujarat Cooperative Milk Marketing Federation, or Amul, has bucked the trend.

As consumers were stuck at home through much of the summer season, sales of milk and milk products like ghee, paneer, cheese and chocolates surged. So much so that the country’s largest dairy cooperative had to hire plants from smaller private players to tide over the capacity constraints, RS Sodhi, managing director of Amul, told THE WEEK in an interaction.

Since, the lockdown began, the company increased its daily milk procurement. Its been procuring 17 per cent more milk or 45 lakh liters per day of milk over the last couple of months.

“Many small players, vendors, small ice-cream manufacturers stopped procuring milk. So, that much extra milk we bought. We have pumped Rs 9,000 crore in the rural economy in Gujarat and other states where we are operating,” Sodhi said.

The company has not only procured more, it has also increased incentives through the supply chain during the period.

“We were operating 115 per cent of the capacity and had to hire plants of those companies who were not procuring milk. Except ice-creams, all our plants worked at full capacity and for certain products like paneer and cheese, the demand was much more,” said Sodhi.

Amul’s products are available in over 1,000 towns and cities across the country. Initially, when the lockdown began, Amul saw its sales dip 10-15 per cent depending on the city, as HORECA (hotels, restaurants and catering) segment, which is a big consumer of dairy products, closed down. However, gradually, increasing household consumption has helped offset the slump in demand from hotels.

“In May, our sales were at par with the sales in the same period last year, because whatever was lost in HORECA, we covered in household consumption. In June, I see 5-6 per cent increase of milk, inspite of HORECA not fully open. In other dairy products like ghee, paneer, cheese and condensed milk, their sales increased from 10-15 per cent to 40-50 per cent,” said Sodhi.

Sales of chocolates, a segment the company has focused strongly on in recent years, actually doubled, he said, adding demand for these products, has particularly increased from upmarkets areas, like South Mumbai and South Delhi.

One segment that took a big knock not just for Amul, but all the players present in the segment, was ice-creams as the lockdown was in place through much of the peak summer season.

Ice-cream sales through March and April were down 95 per cent and 85 per cent respectively, said Sodhi. Sales improved in May, but were still half of what they are usually for the period, and while a further improvement is being seen in June, sales are still expected to be 30-35 per cent lower.

The nationwide lockdown had an impact on logistics and supply chains, particularly in the initial weeks. Given milk was an essential commodity, the supply was more or less smooth. But, there were still some roadblocks in other segments, for instance, trucks were either not available in enough quantity as drivers had gone home or even those that were available faced some difficulty initially when returning empty after completing deliveries.

To tide over these bottlenecks, Amul has relied more on Railways. With passenger trains stopped, movement of goods via railways picked up speed, helping companies like Amul transport products quickly.

“We are supplying 40 per cent of our goods through railways now, which was around 20 per cent earlier,” said Sodhi, adding this is likely to continue even after the lockdown.

Typically for transporting goods from Gujarat to Jorhat in Assam, it used to take 15 days by road, and seven days by railway. With passenger trains suspended during the lockdown, goods trains managed to cover the distance in just three days, pointed Sodhi.

Due to the COVID-19 pandemic, as the consumer awareness towards health and nutrition products has increased, Amul is also expanding its portfolio. The company recently launched Haldi (turmeric) milk and is now set to launch Adrak (ginger) milk and Tulsi milk. Amul also ran campaigns around immunity power of dairy products, said Sodhi.

“Post COVID, we have realised that consumer is now going for more safe, immunity, packed, trustworthy and affordable brands. We are trying to cover all these aspects. Only thing that we need to add now is the message of immunity, that is what we are trying through products and our communication,” Sodhi added.