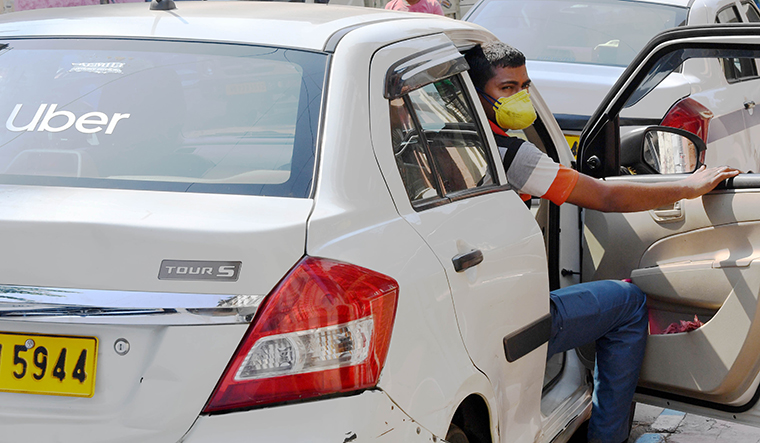 Bhola Saw, a 32-year-old Uber driver-cum-owner worries that he will be unable to pay his EMIs amid no business during the lockdown period | Salil Bera

The decision by cab aggregator Ola to lay off 1,400 employees is not surprising given the slump in the overall travel and tourism business. Uber too has sacked employees as the company works towards cutting down 3,700 workers this month.

In Ola’s case, the 95 percent decline in revenues over the last two months is unlikely to be alleviated anytime soon. The prevailing uncertainty in the segment is likely to continue, making it even more difficult for such cab aggregators to sustain their business. Though cab operations may resume under lockdown 4.0, the combination of social distancing norms and the fear psychosis around COVID-19 could affect the willingness of customers to take cabs.

One of the biggest challenges cab aggregating companies will face is at the heart of their operations: The driver. Ever since the lockdown began, a mass exodus of drivers has taken place from the cities, as they return to their villages with no intention of returning anytime soon.

Many drivers felt that it was better to be with their families than to struggle in different cities. In the near future, a shortage of drivers as well as of cabs is likely, especially in metro cities. Another aspect was the sudden shutdown of flight services due to which airport cab services were affected—as many commuters use Ola and Uber in the metro cities to travel to the airport. Even before the lockdown, cab aggregators witnessed a steep decline in the number of trips as people were afraid to take rides, fearing using the same cabs as NRIs who were returning from abroad.

Going ahead, even as the Ola and Uber resume services, social distancing norms are likely to put a stop to their business. “Social distancing norms will hit these labour intensive companies the worst as they will find it unviable to run their business. The exact estimate of the business loss due to social distancing cannot be predicted at this stage. Cabs would be restricted by the number of passengers and people will still be reluctant to use them fearing the spread of the COVID-19 virus. I do not see any uptake in the cab aggregators business before September this year or for the next two or three quarters. The fear psychosis of the virus and hesitancy to travel by cabs will add to the misery of such companies even when they resume full service across the country,” explained Subramanyam S., the CEO of Ascent HR.

Labour-intensive businesses whose services are linked to labour costs will take a heavy hit from the COVID-19 effect. However, layoffs have primarily been for back-office and administrative positions, for now.

“The legendary set of premise that have guided valuation for digital business is that they are scale invariant. That they can scale up or scale down without much of material consequences. What the recent pattern of laying off suggests in Ola and Zomato suggests, that their businesses are, in a moment of economic crisis, equally vulnerable as non digital business. Presumably, they would have laid off low value add employees who, once the tide turns, can be hired back. The saving grace is that, the techno structure of these digital business which comprise of small teams of high value addition employees remains intact,” remarked Alok Shende of Ascentius Consulting.