Modi claimed anxiety and depression in his latest bail application 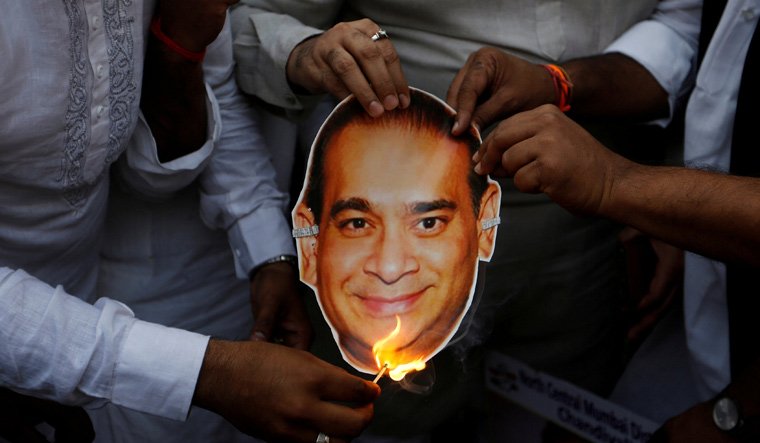 In a setback to Nirav Modi, a UK court on Wednesday rejected a new bail application of the fugitive diamond merchant, who is fighting extradition to India on charges of nearly $2-billion Punjab National Bank (PNB) fraud and money laundering case.

Dressed in a blue sweater and freshly shaved, the 48-year-old was produced before Westminster Magistrates' Court in London to make another attempt at being let out on bail until his trial in May next year.

Modi was looking distinctly healthier than his previous appearance before the same court earlier this year. He reportedly claimed anxiety and depression in his latest application, with earlier bail applications at the court being rejected by Chief Magistrate Arbuthnot, and then also on appeal at the High Court in London, as he was deemed a flight risk.

His legal team has previously described their client's experience in prison as damaging and offered stringent electronic tag and other conditions akin to house arrest at his posh Centrepoint apartment in the West End of London in an attempt to persuade the judge to grant bail.

In June, Modi's legal team took his appeal against that ruling to the Royal Courts of Justice in London, where a judge was told about the diamond merchant's troubled state of mind in "confidential" documents.

Modi has been behind bars at Wandsworth prison since his arrest on March 19 on an extradition warrant executed by Scotland Yard on charges brought by the Indian government.

During subsequent hearings, Westminster Magistrates' Court was told that Modi was the "principal beneficiary" of the fraudulent issuance of letters of undertaking (LoUs) as part of a conspiracy to defraud PNB and then laundering the proceeds of crime.