Letter may be an indication that allegations could be to tarnish image of CEO, CFO 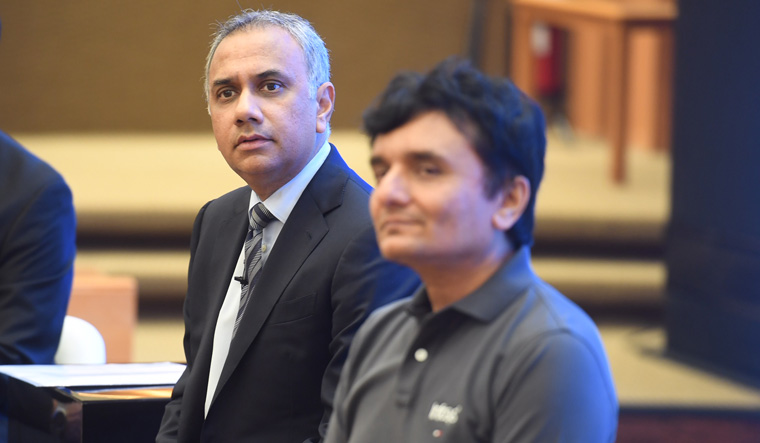 Even as Infosys stated in a letter to the National Stock Exchange (NSE) that it has not found evidence to support allegations of a group of purported whistle-blowers made last month, it became evident that it may be a win-win situation for CEO Salil Parekh and his team. Apparently, based on the statement to the NSE, the shares of Infosys had increased as much as 6.5 per cent on Monday morning.

The company's statement may be an indication that the whistle-blowers' allegations may be just to tarnish the image of its CEO and CFO and to bring a bad name to the organisation. In large organisations such as Infosys, which have lakhs of employees, there are always counter-checks and balances.

The process of project feasibility itself is a check. Every step that goes to vet a project, quote for a project and back-calculate costs and margins are certainly in place in the best of organisations. The only tweak that can happen is in qualitative decision taking, which is certainly the role of the sales head on the project. And even that has checks and controls and ranges, which cannot be flouted.

Given the circumstances in a possible scenario in case the allegations are proved wrong, it would be a win for Infosys CEO Salil Parekh and his new team. It would also mean that investors lost a lot of wealth needlessly—as much as Rs 53,000 crore in India on the day after the announcement, and as much as $ 6.52 billion in terms of the US investor losses. It would also surely erode the sanctity of whistle-blowers by and large as well. It would also then mean business as usual for Parekh and his team, possibly back with a more positive mandate and board acceptance.

“In case, the allegations are proved wrong, it will also mean that there could also be a possible investigation into the motive of the whistle-blowers, anonymous as they are and why they were trying to tarnish the image of the CEO and CFO of the company,” remarked Harish Bijoor, brand expert and founder, Harish Bijoor Consults Inc.

The latest statement by Infosys is also an indication that proving the allegations against the CEO and the CFO may not not be easy. Infosys is a very systems- and process-oriented firm with sound compliance and governance practices. Therefore, the current set of allegations seem really tough allegations, which need to be proven to be believed.

“All of us are well aware of the high standards at Infosys. The finance department is supreme in terms of price fixing etc. However, it is possible that the views of the top management and that of finance may differ. In general, the finance people are conservative and the sales and business development people are more adventurous,” explains Kris Lakshmikanth, the CEO and founder of the executive search firm Head Hunters India Limited.

“In today's scenario of fixed price contracts, digitalisation etc, the old formula for pricing won't work. If you are too conservative, you end up losing the contract. As I see it, the top management at Infosys thought that they can reduce costs and make the same or better margin through cost control, increased productivity etc. It is very difficult to prove the allegations,” argued Kris Lakshmikanth.

Many other experts also feel that proving the allegations may be very difficult.

“Tweaking means what is has been changed. It’s individuals who do tweaking; so when you say can it be done, of course, it can be. But one person alone cannot do it with so many systems and procedures in place... Seems difficult. Ethics and values become a culture of the organisation when leaders embody it in letter and spirit,” Salil Bhandari, founding partner of the Delhi-based BGJC Associates and LLP told THE WEEK.

“At the end of it all, values are a personal trait and cannot be forced and in trying times they ‘really’ get tested. So when an individual falters in an organisation,it does not make the organisation less ethical. But when a leader falters, the ethics of the organisation are questioned. As regards Infosys, its promoters laid a strong foundation by being ethical to the core,” explained Salil Bhandari.

Similarly, a former CFO of a large Indian IT services company, said, on conditions of anonymity, that there isn't any truth in terms of any financial impropriety at Infosys. “Financial irregularity is just not possible with such credible auditors present at Infosys. Hearsay or overheard matters stated out of context is more likely to have happened in this case. Of course, Infosys management will have to go through the hassle of investigation, etc., and a few process issues may come up, but I will be surprised it will have a significant impact on the organisation,” observed this CFO.

Whistle-blower allegations and corporate governance issues are things that are not new to Infosys and had happened due to visa issues or during the exit of its former CFO, Rajiv Bansal, with regard to his severance package during the time of its earlier CEO, Dr Vishal Sikka. It is expected that such kind of events may not have a very long-lasting effect on the company as people tend to have short memories. In another few quarters or so, people will forget Infosys and focus on the company's next move. “When it comes to image, everything is temporary. Public memory is proverbially and really short and even this shall pass for the company,” observed brand expert Bijoor.