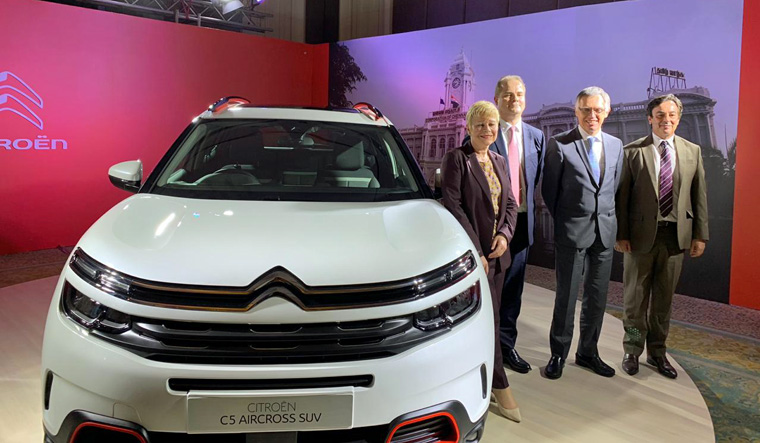 French car manufacturer Citroen unveiled its first model for the Indian market, C5 Aircross SUV, in Chennai on Wednesday. Part of the PSA Group which has been around for 200 years and employs around 200,000 employees around the world, Citroen owns other famous automobile brands such as Peugeot and Opel Vauxhal to name a few.

Carlos Travares, chairman of the managing board, Groupe PSA, said that after coming back from the brink of bankruptcy, they made several changes and are now a very profitable company in Europe with 84 per cent operating profit margin, even better than some of the German car makers. He said the company felt the need to reinforce its presence overseas. After gaining 70 per cent of presence in Europe, which it attained after acquiring Opel Vauxhall, the company realised that it didn’t want to be too dependent on Europe and hence the foray into other markets. “We are managing our portfolio of brands across the world and are bringing Citroen to India, Peugeot to North America and Opel to Russia,” he said.

Citroen signed a joint venture with CK Birla Group (PSA-AVTEC JV) in 2017 and have been working on this project for three years. The greenfield plant in Hosur, Tamil Nadu, will have a manufacturing facility that can produce 100,000 cars, R&D as well as sourcing activities. For their family of cars, the company will also be collaborating with TCS in a very big way for engineering, said Emanuel Delay, executive vice president & head of India Pacific, Groupe PSA. Citroen plans to have an average of 95 per cent localisation.

C5 Aircross is the latest flagship model of Citroen and they have come to the Indian market with a modern and disruptive marketing approach. “India is part of our internationalising strategy and the C5 Aircross SUV, is going to be all about design and comfort,” says Linda Jackson, CEO, Citroen Brand, Groupe PSA, “because that is in our DNA.” The SUV which has “a strong and bold design is immediately recognisable and comes after extensive research in the Indian market,” she said. “This was important because we wanted to come to the market with something that will stand out,” she said. The three individual rear seats in the Aircross is a case in point.

Citroen is marketing itself with some new tricks that it seems to have up its sleeve such as the CCubed Programme which is 'Cool, Comfort and Clever' and the ATAWADEC which is 'Anytime, Anywhere, Any Device and Any Content' that it plans to introduce on its SUV, which according to them is the flavour of the season. However, they plan to introduce one new model every year after launching the first model in 2020 and for that the company is banking heavily on one mantra which consists of three elements—Unique design, comfort and fresh products.

Asked if they were late to arrive in India, Emanuel said Citroen may not have had the first mover advantage but they had the advantage of studying their competitors and why they failed. “We are not chasing market share, our product is very fresh and we have learnt to do more with less, that is our DNA, we have efficiency in our operations and believe in scalability. We are long-term oriented,” added Travares.