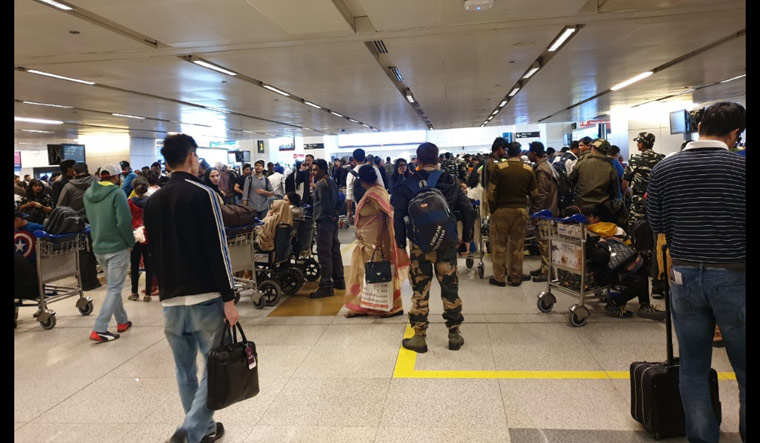 International flights that transit between Indian and Pakistani airspace have been hit by the airport shutdowns in cities near the India-Pakistan border after tension escalated between the two countries on Wednesday. While on the Indian side airports at Srinagar, Jammu, Leh, Chandigarh, Amritsar and Dehradrun were closed for civilian air traffic, Pakistan has temporarily shutdown airports of Islamabad, Lahore, Faisalabad, Sialkot and Multan for an indefinite period.

According to reports, some flights returning to origin, while others appear to be seeking alternate routing. The civilian air traffic was halted shortly after an IAF jet crashed in Kashmir's Budgam district, officials said.

All flights from India to Pakistan have been cancelled. International flights exiting Indian airspace north of Mumbai are being re-routed through the Middle East, The Hindu reported. Many flights which departed from Delhi have been recalled back to the airport. The Indira Gandhi International Airport in New Delhi has been overcrowded with flights getting cancelled and rerouted. Security has been beefed up at the Delhi airport.

The Indian airports have been closed down due to "IAF exercises", according to the official version. "The civilian air traffic has been suspended temporarily in view of the emergency," an official of the Airports Authority of India in Srinagar told PTI.

Pakistan's Civil Aviation Authority spokesman Mujtaba Baig told PTI that flight operations in Punjab and Khyber Pakhtunkhwa provinces have been suspended for an indefinite period. The planes which had left from foreign destinations for these airports have been diverted to the safer airports.

"Due to operational reasons, the airspace at Amritsar has been closed for now. No commercial flights are coming to Amritsar, there is no base here, so flights are not even taking off from here," confirmed Amritsar Airport Director A.P. Acharya to ANI. Passengers were stranded as flight operations at Amritsar airport have been suspended.

The move to close the five airports comes amid escalation of tension between India and Pakistan after IAF carried out strikes on terror bases in Pakistan. Officials said they received instructions from air traffic controllers that the airports have been shut for civilian flights.