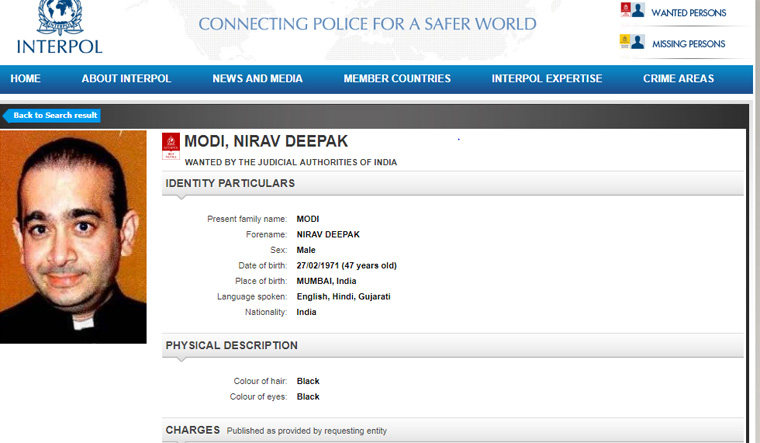 The Red Notice for Nirav Modi | Screengrab from Interpol website

International police organisation Interpol on Monday issued a Red Notice against absconding businessman Nirav Modi for money laundering in the Punjab National Bank scam case, which is estimated to have been worth over Rs 13,000 crore.

In its Red Corner Notice (RCN) issued against a fugitive, the Interpol asks its 192 member countries to arrest or detain the person if spotted in their countries after which extradition or deportation proceedings can begin.

The Interpol has listed "money laundering charges," levelled by Enforcement Directorate (ED), in the RCN, they said.

Modi along with his wife, brother and uncle, all accused in the CBI FIRs in the case, had left the country in the first week of January, weeks before country's biggest banking scam surfaced. Modi and his uncle Mehul Choksi have refused to return India to join probe citing business and health reasons among others, they said.

Modi and his family are believed to have left India in January, a month before the PNB scam 'broke'. Modi and his uncle Mehul Choksi, who is also absconding, are accused of defrauding PNB using their diamond jewellery businesses.

The CBI had tried to track the movements of Nirav Modi through a diffusion notice issued through the Interpol on February 15, but it had limited success as only the United Kingdom responded to the CBI request, they said.

Nirav Modi managed to travel across several countries even after information about his passport being revoked by the Indian government was flashed in the Interpol central database on February 24, the CBI had earlier said.

"After the passport was revoked/cancelled by the External Affairs Ministry, we had updated this information in the diffusion notice. The information that Nirav Modi's passport has been revoked was provided in the Interpol central database, available to all the member countries, on February 24," CBI spokesperson Abhishek Dayal had said.

He had said that after the "diffusion" notice was issued by the Interpol on the request of the CBI, the agency followed it up with six countries where Nirav Modi was suspected to have fled. The agency requested these countries to share information about his whereabouts and movements.

The Interpol Red Notice is expected to boost the case of the Enforcement Directorate, which is investigating the PNB scam, to push for Modi's extradition from the UK. The ED had moved a special court in Mumbai last week to seek Modi's extradition.

Modi, Choksi and others are being probed by various agencies after the bank fraud came to light, following a complaint from PNB that they allegedly cheated the nationalised bank to the tune of over Rs 13,000 crore with the purported involvement of a few employees of the bank.