The massive mosaic art features the six members of the cast 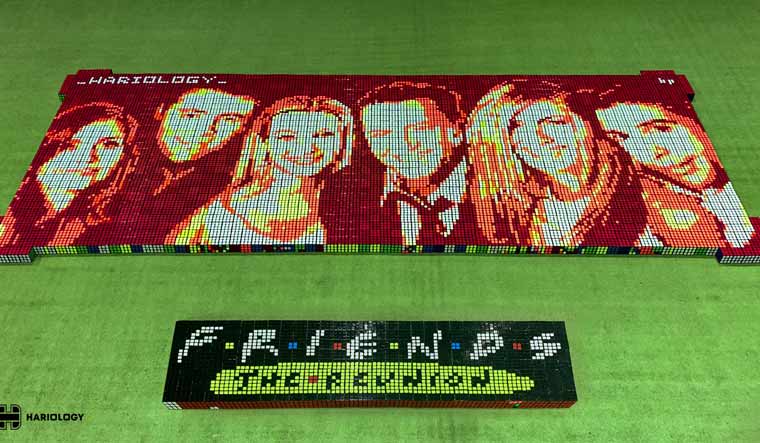 For many people even today, the hit sitcom Friends has been something they turn to when they need an instant mood-lifter. With the reunion special premiering on Thursday, fans across the world are finding their own ways to add a special touch to the highly anticipated episode.

Hariprasad was introduced to the sitcom by a friend, whom he thanks. “I have been a Friends fan for a long time. Even now, if it is a hard day, if I watch a random episode, I feel relaxed,” he says. And so, he had planned on creating this Rubik’s cube art right when HBO Max announced the premiere date of the reunion special. It took him about two weeks to complete the piece.

With the Friends poster, it is the first time he has recreated multiple faces together for a single artwork.

To create the artwork, he gets a portrait of the person, and enlarges it on his iPad so that the image can be broken into pixels. It is this pixelated image that then forms the base of his portraits. As far as colours go, he then converts the colours of the pixels to that of the Rubik’s cubes so that he can easily recreate the image. Of the six standard colours of the cube—red, green, blue, yellow, white and orange—Hariprasad says green is the colour he rarely gets to use. Since childhood, he has been interested in drawing and painting, and so he finds his way around arranging the cube’s colours that bring out the details in his portraits.

Before he forayed into the artistic side of Rubik’s cubes, he has been long involved in solving the cube and introducing more people into this hobby that is a great way to stay off screens and improve focus. Especially during the lockdown last year, and now again amid the second wave of COVID-19, Hariprasad (under the brand name Hariology) has been offering online Rubik’s cube solving classes for children. His youngest student is three years old, and his oldest student currently is his grandmother, aged 92.  He has also hosted cubing championships in the state.

He had also created mosaic portraits of actors Suriya and Aparna Balamurali after the release of their film Soorarai Pottru. In one of his YouTube tutorial videos on the cube, Aparna features along with him, learning to solve it from scratch.

“I would like more kids and adults to discover the fun and benefits of solving the Rubik’s cube,” says Hariprasad, who is also a member of the World Cubing Association, the official body that conducts cubing competitions across the world.