Sans the glamour of the stage, post-pandemic virtual concerts give a personal feel 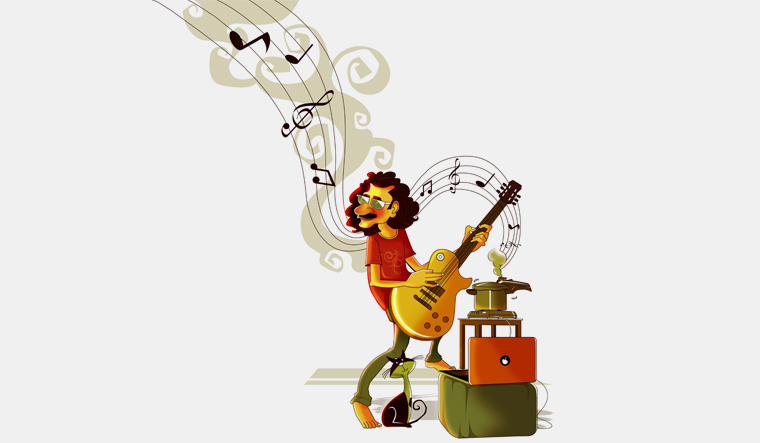 “And what is the use of a concert…without a stage or audience?”wondered Alice, circa 2019.

Perfected and popularised mostly by K-pop stars, virtual concerts, however, became an everyday affair as Earthlings were left to fend for themselves in a pandemic.

It all began with the ‘iHeart Living Room Concert for America’to raise funds for corona warriors in March. Billie Eilish sang on her sofa. Elton John played the guitar from his kitchen and the Backstreet Boys sang in unison from five locations.

But days before that, fans could not believe their eyes as Chrissy Teigen made a cameo on her husband John Legend’s at-home show. Wrapped in a towel, she read out the viewers' comments and song requests to her husband, who was on the piano.

Soon, a mini-explosion of live concerts and DJs flooded the internet as performers—including those who were hesitant to embrace the virtual space for its lack of connect with the audience—made their debut on their social media handles and YouTube channels, rallying around hashtags like #TogetherAtHome.

Musicians and performers sang, played instruments or danced to audience's requests or at one’s own whim. Performing live from one’s attic was a distant reality for most of these artistes and their audience until a year ago. For the performers, a stage was not one without the adrenaline rush and vibe of the audience. For fans, an energetic show without crowds chanting and hopping was incomprehensible.

Come 2020, the unthinkable happened—from pyjama parties of the past mankind entered pyjama gigs. Performers are often seen without their makeup, without expensive outfits. Sans the colour and glamour of the stage, the post-pandemic virtual concerts give a more personal feel. This never-seen-before casual air is the most fun aspect of the current social media concert trend.

“While performing within the confines of a room, it is mostly only you and your band. It is more personal and introspective. On a stage, people may not notice the mistakes a performer makes. But now, it is you, the mike and the instruments. Hence, it is more performance-oriented. We also figured out how bandmates vibed,”says Bengaluru-based rapper Sooraj Cherukat, aka Hanumankind, who loves to associate himself with anything music.

As much as the artistes are immersed in their performance, they also seem to keep it real. Sometimes, a pressure cooker whistles in the background, on the other side of the screen.

The virtual gigs or shows have wide opened fresh possibilities in audience engagement, thanks to an ever vibrant social media.

Performers often engage with their fans via comments or online Q&As, even during live shows. Live chats and comments are acid tests. From complex questions to product queries and mischievous comments from acquaintances just to embarrass the performer in front of the live audience, these artistes have seen it all.

"Where did you buy that head band from?", "I've followed you, follow me back!" (yes, that's an order!), "Where is your partner?"—fans can get really intrusive at times!

Rekha Raju, an acclaimed Bharatanatyam and Mohiniyattam dancer and teacher from Bengaluru, was conducting an online demonstration when a member from the audience asked how one can identify if an artiste was good or not during a live performance. What is an appropriate answer to that? “If you can watch a performer for 20 minutes, that must give you an answer,”pat came the reply from Raju. “It is a live online show, with people watching you from across the globe. Such tricky situations do not happen during an on-stage lecture with limited avenue for interaction,”she says laughing.

Enter Murphy’s Law. An Indian classical dancer from Delhi hosted her first online performance from home for a social cause. Effervescent in her vibrant costume and jewellery, she began her Facebook live with pre-recorded classical music in the background. A few minutes into the performance, as (un)luck would have it, the power snapped (something which had not happened in a while). She continued performing (thumb rule says dancers cannot stop performing midway, whatever happens) for a couple of minutes more before she realised that it was dark, with no music and the Wi-Fi cut off.

Dawning of a new era?

Many artistes and aficionados shrugged off virtual concerts and the not-so-formal pre-recorded performances even during the early lockdown days. Turns out, what necessity is to inventions, adaptability is to survival instincts. “It takes only a small amount of effort to stay relevant. People appreciate what you do honestly,”says Ashwin Gopakumar, vocalist and founding partner of music band When Chai Met Toast.

For the performers of the Bengaluru-based music band who were touring relentlessly since the last couple of years, the lockdown was a blessing in disguise. “It was as if our exams got rescheduled,”Gopakumar quips from the other end over a WhatsApp call. “We revised, rewrote, reworked, unwound with families and learned. The lockdown also showed us the relevance of independent musicians in the society.”In isolation, music feels more necessary than usual, to hold people together, to instil hope in them.

He notes that the pandemic led to the meeting of the artist and the musician. “We collaborated with a lot of new artists and animators for our work. These mutual collaborations have been a lesson in creativity and growth.”

That said, as much as they miss live shows, the band is in no mood to host a live virtual concert. The audio quality and bandwidth is usually poor or less than ideal and that hinders with the audience’s experience and reception.

An up and coming music composer friend recently observed, "Chris Martin is a really good singer. But he was a shadow of himself during a recent online performance. In spite of realising the same, it was funny how he continued singing unapologetically and without feeling a bit embarrassed.”It is about such raw experiences, too.

But the below par audio quality is the least of worries for the layman huddled at home for an extended period.

For, who does not like to be reassured that a beautiful world is still out there?