IHWF 2020: Discover India's past through heritage walks with Sahapedia and UNESCO 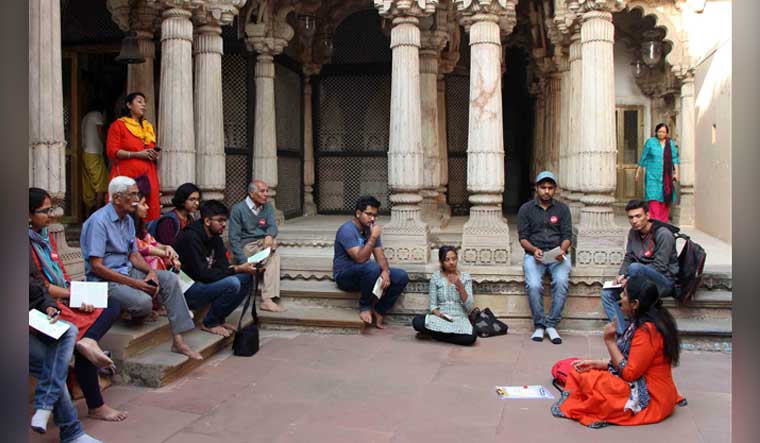 A moment from a heritage walk conducted by Sahapedia | Sahapedia website

This is not your typical heritage walk. Whether it is a demonstration of the ancient art of Sakhtsazi, a glimpse of the Kashmiri tradition of papier-mâché, a ‘baithak' on the industrial legacy of railways in India, or a view of the captivating process of indigo dyeing by a textile and garment venture (one that has received the UNESCO Seal of Excellence 4 times so far), the India Heritage Walk Festival (IHWF) is an attempt to make India’s rich cultural heritage accessible to all.

For the entire month of February, Sahapedia, in partnership with UNESCO, New Delhi, will be taking history and culture enthusiasts around the country to rediscover local narratives and immerse in collective strolling, with the third edition of its award-winning, multi-city IHWF.

As we enter a more salubrious end of winter, 'tis the season to walk in sun-dappled lanes and thoroughfares, and to catch sight of a trail that goes back to a time when these practices flourished with much exuberance.

Find all the details of events being organised in the second week of the India Heritage Walk Festival 2020.

With a much more multi-faceted cultural programming this time, the walks, baithaks, workshops, Insta meets, Insta Tours and Anubhutis (to encourage interaction with people with special needs) will pan out in museums, monuments and markets, natural landscapes and areas known for their rich cuisine, to gender-oriented narratives, across ten central themes including knowledge traditions, visual and material arts, performing arts, literature and languages, practices and rituals, histories, institutions, people, built spaces and natural environment.

Last year, Sahapedia held a training programme for women from shelter homes to train them to become walk-leaders. At the month-long India Heritage Walk Festival, some of the walks will be led by women who trained here, including 'Sensory Delights of Old Delhi', ‘A Walk through Humayun's Tomb Complex', and 'Exploring Nizamuddin Basti.

"We have also curated special walks and events with specific user groups in mind, such as students, travellers, local residents, and professional groups such as photographers, conservationists, and so on,” says festival director Vaibhav Chauhan.

The breathless variety of walks, spanning the four corners of the country, is an education in itself. Just going through their website will reveal the sheer range of built and intangible heritage waiting to be explored. Examples include the Ever-Living Museum in Shillong, Chinese paper-cutting and lantern making in Kolkata, the historical churches of Vadodara to the tales of kings, commissioners and Christian missionaries of Karzoo Bagh in Leh.

Prices for the walks at the festival range from Rs100-200.

Sahapedia is an open encyclopedic resource on the arts, cultures and histories of India, offering articles, books, photo essays, video, interviews, oral histories, maps and timelines, authored by scholars and curated by experts.