India’s civilisational linkages to Xinjiang are very old and deep 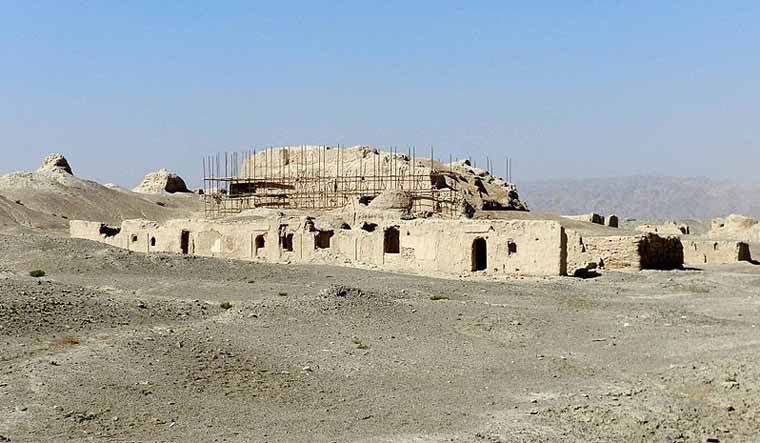 There is an old Brahmin who resides in the Museum of Indian Art in Berlin. Not a figure of flesh and blood or passion and prejudice, but an artful sculpture. A seated ascetic figure of a venerable sage with thick matted mane and sporting other ensigns of priesthood on him. There is no cold sneer in his smile, only mild bemusement. His eyes do not long for heaven, but are sagely and grant benediction to curious onlookers. Only the arms have been vandalised by the ravages of time. Otherwise, the figure has an air of imperishable dignity to it.

Had such a figure strode by us as a man, in the holy cities of Varanasi or Rishikesh, we might have passed on by without remark—yet another hermit among a sea of pilgrims. Yet he hails of no quarter of present Hindustan, but from a remote corner of greater India of antiquity. He has crossed oceans of time and the vast steppe spaces of Eurasia and comes to us from historical Turkestan, or Xinjiang as the Chinese now call it. 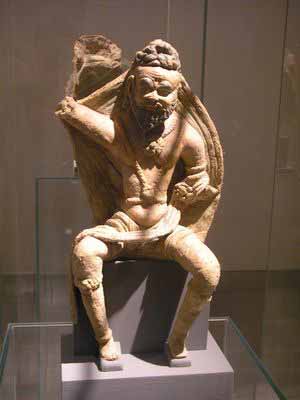 His original home is in the Shikshin temple, a ramshackle maze of Buddhist ruins at the North West fringes of the great Taklamakan desert. The temple is adjacent to the town of Karasahar, one of the great chain of Oasis towns in the Tarim basin that straddled the ancient silk route. In antiquity, it was known as Agni or Agnidesa.

A town close to the Gobi desert with a Sanskrit name might sound paradoxical. Yet the Tarim basin was a cradle of Indian civilisational influences. A lost Buddhist world lies buried beneath the moving sands of the Tarim basin, its fingerprints only visible in the hundreds of ruined temples, grottos and caves that dot the region.

The first people to move into this region, before the 2nd millennium BC were an Indo European people who seem to have been Caucasoid with fair hair and light eyes. Over the course of the next few centuries, nomadic people from the north as well as the Iranian Saka (Shaka in Sanskrit) moved into the Tarim basin bringing cultural and linguistic influences with them. Historians refer to the people as Tocharians, after a central asian tribe called Tokharoi by the Greeks, and Tukhara in Sanskrit.

But it was Gandhara (around the valley of Peshawar), that lay beyond the Karakorum and Pamir mountains whose syncretic civilisation exerted a protean and dominant influence on the cities of the Tarim basin. The Gandhara region was the crucible that saw the fusion of Greek artistic culture with Mahayana Buddhism. After Asoka made Buddhism the state religion, the alluring culture and faith of Gandhara spread along the trade routes and mountain passes deep into modern Afghanistan, Pakistan and Xinjiang. The Yuezhi, a nomadic pastoralist group and their successors, the Kushan Empire served as great propagators of this Hellenised Buddhism into Xinjiang and China. Indeed, the Kushans, whose empire stretched from Shule (Kashghar) in Xinjiang to Saketa(Ayodhya) in India were great propagators of the new faith and lavished imperial patronage on monks, monasteries and Buddhist learning. They also opened new trade routes that served to link their disparate territories and which enabled pilgrims, merchants and scholars to move with ease.

The efflorescence of this Hellenised Buddhism in the Gandhara region meant that Gandhari and Buddhist Hybridised Sanskrit came to exert a dominant influence on the administration, commerce, liturgy and literary arts of the Tarim Basin. The Tocharian alphabet is itself a version of Brahmi and the entire lexicon of religious terms in Tocharian languages comes from Sanskrit. The Tocharians have their own terms for Bodhisattva (boddhisatve), Karma (Yamor), Brahmin (brahmanae) etc.

According to different Tocharian legends, the first city state of Khotan was founded by Indian immigrants from the city of Takshashila(Taxila) around the 3rd century B.C. One legends say that Emperor Asoka banished a group of nobles from the city to Go-stana or Kaustana(land of cows), which later became Khotan(modern Hotan) the first historical Kingdom in the Tarim basin.

Hsüan-tsang, the 7th century Chinese Buddhist monk states that Buddhism arrived in the region during the reign of one Vijayasambhava (2nd century BC) when an Arhat (One who has insight into the truth and achieved Nirvana) from the Kashmir region, Vairocana arrived in Khotan. He built the first Stupa and soon the King of Khotan and his people became Buddhists.

Going by surviving manuscripts, the Buddhist Jatakas were extremely popular in the Tarim basin. Archaeologists have also discovered Avadana ( stories narrated by the Buddha about the working of Karma) literature in ruins of large monasteries. Indeed, as much as a carrier of Indian literature, the Buddhist establishments in the Tarim basin also acted as major centres of doctrinal learning for foreign monks.

North of Khotan and across the Taklamakan desert is the city of Kucha( Kucina in Sanskrit) which also developed as a major centre for Buddhism around the 4th century AD. Unlike other oasis towns of the Tarim basin which was dominated by the Mahayana school of Buddhism, Kucha followed the Sarvastivada School which was one of the early Buddhist schools established by the Asoka and later heavily patronised by Kanishka, the Kushan emperor. According to Hsüan-tsang, Kucha alone had over 100 convents with over 5000 Buddhist disciples and that their doctrine and rules of discipline were like those in India.

The magnitude of Buddhist influence in the Tarim basin can be gauged by the murals, sculpture and records of the rock cut caves and cave grottos in the area. The paintings show a mix of Gandharan, Chinese and Iranian influences. They depict Jataka stories, Avadanas, scenes from the life of the Buddha and Apsara’s. According to a text from Kucha, some of the paintings in the famous Kizil caves was done by an Indian artist. Kumarayana, a monk from Kashmir was a royal priest of Kucha and his son, Kumarajiva became a famous translator who propagated Buddhism in China.

The Buddhist culture in the Tarim basin only started dying with the Turkification and Islamisation of the Tarim basin around the 10 century A.D. The process was a violent and destructive one that within the span of two centuries stamped out Buddhism in the region. This history and rich culture then lay buried and forgotten by the centuries until its rediscovery in the late 19th and 20th century. That, however, is another story.