A unique, one-of-a-kind protest got football fans to rise against the citizenship law 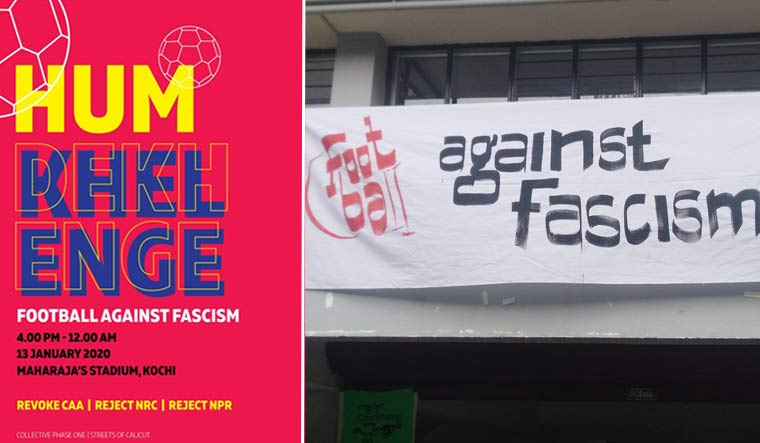 The poster for Football Against Fascism (left); a banner at the venue | Prejomon Sunny

The Maharaja’s College Ground in Kochi is teeming with activity. Football fans donning jerseys of their favorite teams are cheering. Many are chanting ‘Azadi’ slogans. There are posters and hoardings condemning the recently passed Citizenship (Amendment) Act, the proposed National Register of Citizens and the National Population Register. When the country is vehemently protesting the Central government’s fascist policies, here is a bunch of football lovers marking their protest using their love for the sport.

On January 13, ardent football lovers and fans gathered at the Maharaja’s College Ground to mark their protest, aptly named ‘Panthukondoru Nercha’ (an offering with the ball)―a collective effort by Streets of Calicut, a cultural community based in Kozhikode district, Collective Phase One, a collective community of filmmakers, and the Maharaja’s College Union. The protest was a first-of-its-kind in Kerala in using sports to address a serious issue prevailing in the country.

Filmmakers such as Rajeev Ravi, Aashiq Abu, Muhsin Parari, Madhu C. Narayan and Zakariya also made their presence felt in the protest. Parari and Zakariya are also part of Streets of Calicut, which organised the protest. Football lovers from Kochi and other parts of the state flocked in numbers to share their love for the sport and condemn the attempts to enforce the contentious citizenship law by the Central government which continue to face the wrath of the student community across the country.

On why the organisers chose football, Maneef Mohammed, co-founder of Streets of Calicut, says, “People are divided on many grounds. However, football unites them. This uniqueness of the sport is what we planned to use to protest against the problems our country is facing today.”

“Our intention is to organise a peaceful protest which doesn’t trouble the people. This is one of the reasons why this protest stands out,” says Maneef, who also added that the organisers would be willing to introduce new and innovative forms of protest in the future. “‘Panthukondoru Nercha’ is the first step in the idea to bring about new forms of protest without troubling the public,” Maneef says.

Activities in the unique protest included drills, termed ‘Dribble a Nazi’ and ‘Shootout for Democracy’. For ‘Dribble a Nazi’, a volunteer had to dribble the ball past mannequins wearing white shirt and khaki shorts, and shoot it into the net. The aim of ‘Shootout for Democracy’ was to “score a total of 10,000 goals against fascism”. Both events were open to the public and people participated in huge numbers to use their goal as a symbol of protest.

As part of the protest, exhibition matches, for both men and women, were also held. The event consisted of elevens, sevens and fives matches. Four teams participated in the eleven-a-side football tournament, while friendly matches were conducted in the five-a-side and seven-a-side category. 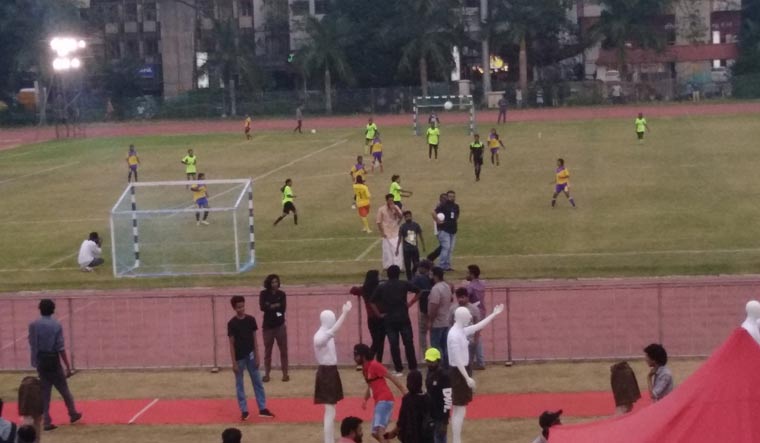 A ‘Shirt Swap challenge’ was also conducted by the organisers to highlight the collective and unified nature of the sport and its ability to bring diverse people together. “We have fans of different football teams who have united in the name of football, despite their differences,” says Maneef. “The ‘Shirt Swap Challenge’ is being done to underline that capability of the sport.”

Music also became a symbol of resistance, with renowned music composer Shahbaz Aman and Shanka Tribe, a tribal-music band, performing at the protest. Aman sang his memorable hits in a unique rendition with the Shanka Tribe, who combined music from tribal instruments with Aman’s songs.

Publicity for the event was done by spreading posters about the event on social media. This was done, according to Maneef, to bring together only those interested in the sport and the protest. “We have not compelled anybody here. Our plan was to bring together those who shared a similar interest.”

The symbolic protest, with the demand to “revoke CAA, reject NRC and reject NPR”, eventually turns out to be unique from other protests that have taken place against the legislation. The admiration towards the sport became their weapon of dissent, thus justifying the slogan written in the banner which greeted the protesters and visitors at the entrance of the ground, “Football against Fascism”.