A viral screenshot of a Kannada curse has spooked Twitter users 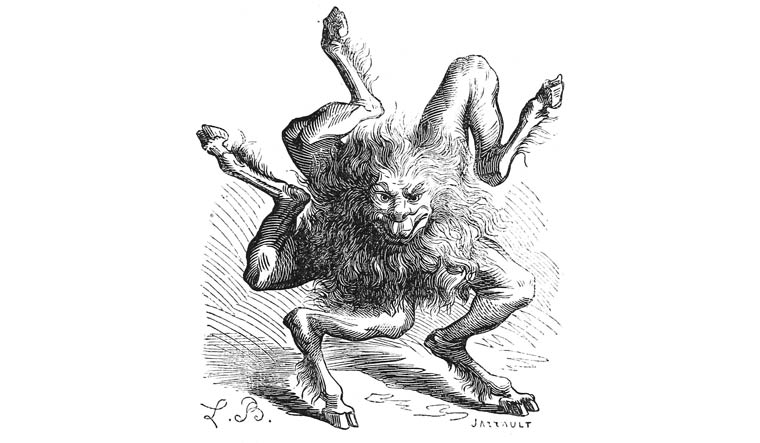 The internet can be a frightening place but thankfully, one need not face its horrors alone. On Thursday, Twitter user @gusyar_ shared an image of a threat he had allegedly received from an unnamed Snapchatter.

According to @gusyar_, the other person had requested "juulpods" — nicotine salt cartridges used to refill the popular Juul brand of e-cigarettes. When @gusyar_ refused, he was met with this image and text.

This nigga asked me for some juul pods and i said no and he sent me this? pic.twitter.com/TB1iwrVUbI

Not knowing Kannada (the language used in the image), @gusyar_ shared  the screenshot on Twitter hoping for a translation. Twitter users were soon spooked by the image, thousands of whom retweeted and responded to it.

NOW YOU CURSED ALL OF US 😭

The image shows the demon "Buer," a mythological being first named in the 16th-century Latin text Pseudomonarchia Daemonum, meaning False Monarchy of Demons.

The text is an appendix to a larger work by Johann Weyer that aimed to debunk the idea of demons and witchcraft. As part of this mission, Weyer included an appendix listing out every demon he had heard of being mentioned by the supposed mages and witches. The False Monarchy of Demons contains a purported hierarchy of demons in hell, with these unholy beings ranging in rank from prince to president to king.

Buer is described as a "president of the stars" in hell, who commands "over 50 legions of demons". His abilities include being able to heal the sick and summon familiars as well as teaching philosophy and herbal medicine. Buer is shaped like a wheel and supposedly moves like one.

Even without knowing what the image says, the effect was terrifying. However, true horror struck once users were able to translate the Kannada used in the image.

He says “your baby will be cursed with a demon spirit inside it. You will regret living your life this way and will never find peace “

The line has the ring of a curse to it, which gives it an element of horror unlike that of most internet insults which only manage to denigrate the recipient. Frightened internet users soon shared their feelings via reaction images.

One user commented on the excessive nature of the curse.

This is the demon Buer, a leader of hell with 50 demons under his command. Bruh felt a whole army was necessary to stain this man who never got him right w some juul pods.. Millennials🤷‍♂️

Thankfully, the internet has its own remedy for frightening images. For as long as there have been emails, there have been "chainmails" that try to frighten the recipient into doing something by threatening their loved ones. To counter these, the "anti-chainmail" was devised — cute pictures that promise immunity to the recipient.

Safety turtle was also called to the scene.

By virtue of these images, @gusyar_'s safety was somewhat assured. Additionally, a few users argued that Buer could also be a harmless demon who just teaches philosophy. Nevertheless, the need for counter-measures was apparent.

The Uno reverse card, purpoted to reverse the direction of play of a card, and presumably, of a magical opponent as well. @gusyar_ seems to have taken this advice.

Hopefully, the power of the Uno reverse card will undo the evil curse of the juul-denied Snapchatter. While the origins of the Kannada curse are as yet unknown, it is worth noting that ancient curses are still feared in Karnataka, as the royal Wodeyar family found out.