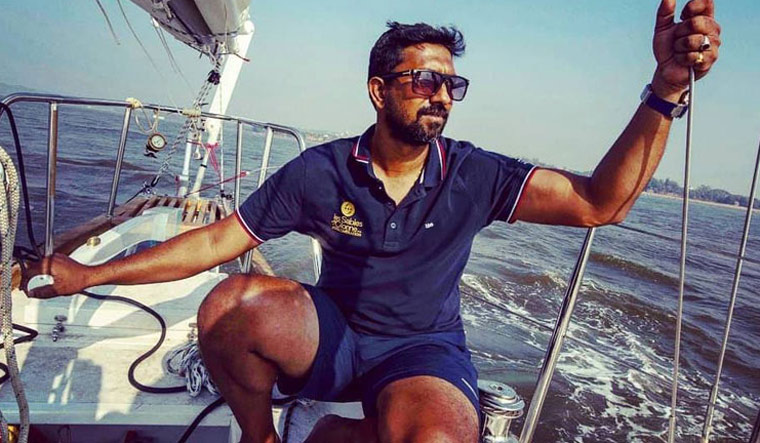 The sea unleashed terror, recalls Indian sailor Abhilash Tomy who was rescued from the Indian Ocean off Australia after he suffered a grievous back injury while participating in the Golden Globe race.

Fierce winds and waves lashed his yacht, hurling him up to the top of the mast. “The yacht rose to some 110 degrees. As it repositioned within a minute, I fell from the mast tip on to the deck. I've never seen such huge waves and such ferocity of the sea before,” says the naval commander.

Tomy, whose yacht was wrecked in the Indian Ocean on September 21 during the international Golden Globe Race, was talking about his accident for the first time as he recuperated at a French hospital on New Amsterdam isle. The commander had difficulty talking.

The naval officer was busy with maintenance work on the deck of 'Thiruya' when all of a sudden the winds turned hostile. The yacht lost direction as the mast got wrecked. Tomy couldn't even move because of his injury. “The wait for rescue was agonising,” he recalls. “A long 70 hours.”

Tomy's watch had got entangled in a rope as he fell. He couldn't move his arm and held on with one arm. “I feared my hand would break. That was when the watch strap broke. I lost my grip. And I fell on to the deck,” Tomy says. “Huge waves battered me, one after the other, and I fell with force on to the floor four times.”

The warning was that winds will pound with a 100 kilometre-per-hour (kph) fury and that waves could leap as high as 10 feet. But it was much worse. “The actual speed of the storm was 150 kph. The killer waves rose as high as 14 feet. All you could see around was white froth. “I lowered all masts as the winds gathered speed. Looked up all instructions in the books.

“'Thuriya' was positioned 90 degrees facing the wind. The barometer reading kept changing, indicating a cyclone forming somewhere on the sea. The wind-based electric generator also crashed. The gas stove and cylinder fell down as the wind rocked the yacht again. Gas was leaking. I managed to plug the leak, keeping the cylinder straight. A diesel leak near the engine was the next problem. I had no idea what to do. And a terrible back pain started. I fell down as I tried to walk. Then I managed to crawl towards the communication systems and used them.”

Tomy recalls he kept away thoughts in those 70 hours. “Thoughts could get you into complications, that is the lesson from years of voyage at the sea.”