What is plant-based meat and why is it gaining popularity 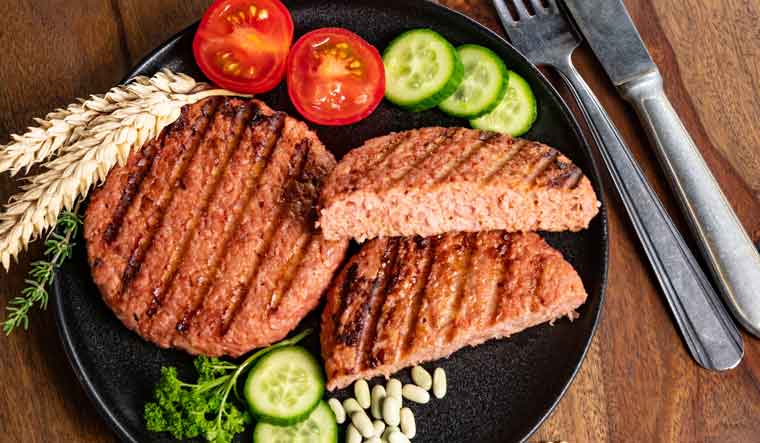 Plant-based meat has been around for a while now—it has become a solution for all vegetarians to satisfy their meat cravings without cheating on their vegan-friendly and cruelty-free diet.

With rising awareness of climate change and animal cruelties, an increasing number of consumers are opting for vegan meat that tastes exactly like meat but has none of the drawbacks. Vegan meat gained a lot of popularity since celebrities started to endorse and promote veganism and alternatives for non-vegetarians. Also, trends like ‘Veganuary’ have been promoting switching to vegetarianism and thus a one-stop solution for all non-veg lovers to switch their diet was to consume vegan meat and slowly adapt to the changes.

What is vegan meat?

Vegetarian meat is manufactured using meat replacements that have the same taste, texture, and flavour as meat, but without causing any cruelty. Vegan meat, also known as faux, fake meat, mock meat, meat analogues, or plant proteins, are products that have a similar texture, flavour, or appearance like that of animal-based meat.

Cell-based or lab-grown or cultured meat products are another meat alternative that is created from genuine animal cells that are developed in a food production plant rather than acquired from animals bred in captivity and butchered for human food. Except for a few eateries in Singapore, these aren't yet on the market. They are, however, meat alternatives and they may play a role in the larger picture as we strive to transition away from industrial farming and toward producing the meat that customers desire without any harm.

These vegetarian meat replacements are designed to provide one with all the nutrition that non-vegetarian diets provide. Because of its striking resemblance to genuine meat, vegan meat is difficult to distinguish. A variety of components are utilised in the production process including pea protein, plant-based proteins, wheat gluten, soy, potato protein, mung bean protein, and rice protein.

Imagine Meats is an Indian plant-based initiative launched by actors Genelia D'Souza and Riteish Deshmukh. The brand that debuted a year ago offers a range of products that are produced completely plant-based. Speaking to THE WEEK about increasing demand for meat alternatives, Sudhish Sukumaran, Head, Imagine Meats said: “People have grown more conscious of the ill effects of real meat, in addition to animal cruelty and the water consumption in rendering cattle. Plant-based meat has become more popular in recent times due to an increase in awareness of the health issues people face when eating meat. Awareness and self-consciousness in the minds of people have given a lot of scope to the people to make their way to plant-based Meats and meat alternatives.” Recently actress Anushka Sharma and cricketer Virat Kohli were also seen endorsing plant-based meat company Blue Tribe.

A recent study conducted by the US National Institutes of Health discovered that vegan meats were high in fibre, folate, and iron, and had less saturated fat than that ground beef. However, they have less protein, zinc, and vitamin B12, as well as a lot of salt. But the study had concluded that vegan meat is a healthy alternative to real meat.

How did it begin?

Meat substitutes can be traced back to 206 BC China where ‘Tofu’, a meat alternative, was primarily seen. It was popular during the Medieval Ages in Europe during the Christian observance of Lent, when eating meat from warm-blooded animals was restricted. Over time the popularity increased and currently, a lot of brands have come up with a wide variety of meat alternatives. In certain regions of the world, the market for plant-based meats surged by 37 per cent. In 2020, meat replacements accounted for around 11 per cent of the global meat and alternatives market. Vegan meats can be found everywhere nowadays, in restaurants, grocery stores, bakeries, vegan school lunches, and private residences. Many famous fast-food chains have also partnered with vegan meat brands and added a few vegan-friendly dishes to their menu. McDonald's and Yum Brands, which owns KFC, Taco Bell, and Pizza Hut, have announced partnerships with Beyond Meat. Burger King has partnered with Impossible Foods to provide meatless Whoppers. Del Taco has also announced that Beyond Meat would be available.

Why switch to vegan meat?

The popularity and demand for the same are increasing day by day. So why exactly should a person shift to vegan meat? The answer is simple, for starters, vegan meat is the best solution to reduce animal cruelty. People have started to adopt diets that are sustainable and environmentally friendly. With rising concerns in the environment and surroundings, everyone has become more cautious and aware about their actions and steps that they take in every sector. Practically in every parameter including land usage, water consumption, and combating climate change, vegan meat has the potential to make a significant impact favouring the environment. Livestock farming is one of the most carbon-intensive activities around, it releases a lot of greenhouse gases. Plant-based meals can reduce carbon emissions significantly.