What is Wordle and why is Twitter obsessing over it? 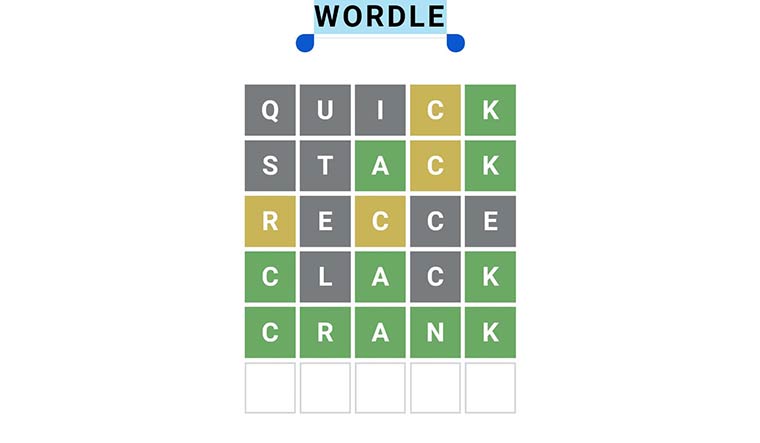 Screenshot of a completed Wordle puzzle

A game of coloured mosaics is taking social media by storm. A simple five-grid word puzzle with six guesses has become an obsession on Twitter, with users sharing screenshots of coloured squares.

So nearly snatched grinding defeat from the jaws of immediate victory this morning.

Wordle is a daily word puzzle game, where the users have six chances to guess a five-lettered word. Created by Brooklyn based software engineer Josh Wardle, known for crafting interesting social experiments, the catch of the game is one can get no clues in the trivia.

The game has a different word every day for all the players across the world and no, you can’t play the game multiple times to find the right word. A player can only play the game once in the day, adding to the suspense.

In six chances, players must guess the correct word. Users who get the word accurately for multiple days in a row get to keep a streak.

The game was originally not designed for the world to play. Wardle created Wordle (with pun intended, of course) for his partner Palak Shah, who loves word puzzles, according to the New York Times.

Wardle released the game publicly in October. Though only a handful played it in the initial weeks, currently there are over 3 lakh people solving the daily puzzle.

How to play wordle?

Playing Wordle is no herculean task. The game can be accessed by simply opening the Wordle website on an internet browser.

The game begins with a blank 5-row, 6-column grid, with the user typing in a random five-letter word in the first row. One trick is to use a word that has many vowels, like ADIEU.

Using these colours, the users must deduce the correct word in the next five chances. From the second guess ahead, the player must strategically gauge what the word could be. With more yellow and green boxes, one can guess the right word.

Why has Wordle become so popular?

As the puzzle can be played only once per day, it is a thrill for all to spend a few minutes guessing the word and sharing their victory on social media.

Not only good for brainstorming and improving vocabulary, but this game is also a chance to play against the whole world, as everyone has to guess the same word in six chances.

The best feature is that the game is free and has no ads or annoying graphics. One also need not sign up for anything, making it a smooth sailing experience.

“Enjoyed too often, they lose their charm,” he added.