‘Moments in Motion’, a unique exhibition on motion pictures and vehicles in motion 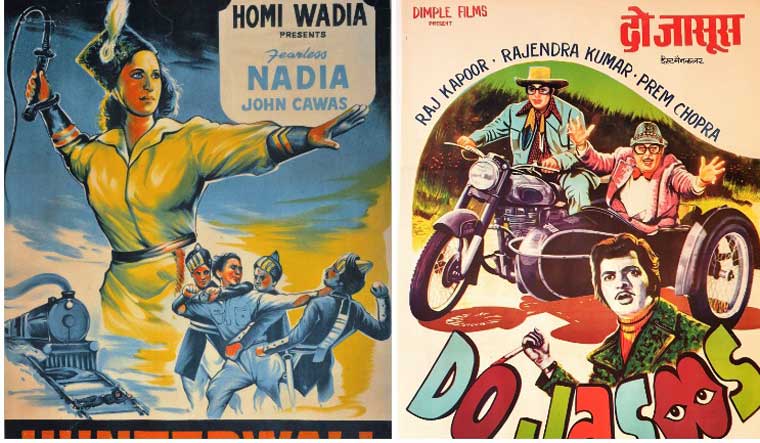 Dilip Kumar raced his tonga with a bus, a seminal ‘Man vs Machine’ moment, in 1957's Naya Daur, while Fearless Nadia movie posters always had a steam engine in the background. And who can forget the many unforgettable film scenes featuring cars, either in the thrill of the chase, or anchoring the charismatic romantic credentials of the hero?

Motion pictures and vehicles in motion have been in a romantic liaison ever since their advent. Now, an exhibition in the national capital region lets you relive those golden moments from the silver screen through a collection of film posters, lobby cards and memorabilia.

‘Moments in Motion’ is India’s first exhibition of its kind, where original Indian movie posters and lobby cards featuring modes of transport that were part of the storyline of a movie and important enough to have found a place in their advertising. The exhibition at the Heritage Transport Museum, an hour’s drive away from Delhi in Gurgaon, runs till end of January and features more than 60 posters and over 100 lobby cards — the oldest is ‘Hunterwali ki Beti (1943)’ while the youngest is 1982’s ‘Chalti ka Naam Zindagi.’

There’s a reason why. “All the posters we have on display are painted posters only, drawn by hand by poster artists and then printed. Post-1982, digitalisation started coming in and the art of drawing posters by hand started going down. You don’t find it anymore,” explains Tarun Thakral, founder of the Museum. “We are paying a tribute to the art also, and a tribute to the creativity of those poster artists, a lot of whom lost their jobs (when digitisation came in),” he adds.

Thakral came up with the theme after realising that visitors to his one lakh sq feet museum found the famous car from the nineties hit ‘Dil To Pagal Hai’, one of the permanent exhibits there, “fascinating.” He quips, “Bollywood is something that connects with every Indian visitor.”

With the museum’s seventh anniversary coming up and faced with a financial loss after the museum had to be shut down for five months due to the lockdown, Thakral decided on one stone to kill two birds — a Bollywood themed special exhibition to celebrate the anniversary, as well as bring the crowds back.

Luckily, the logistics were already sorted out. “I had this huge collection of Bollywood memorabilia pertaining to transport, collected over a period of time,” Thakral points out.

The exhibition is equally a celebration of cinema and its association with modes of transport (there’s even a poster with a goat cart from an old film on display!), as well as poster art. “Over the years, its aesthetics, importance and the meaning it transmits has gone through several transitions,” says a note from the Museum, “These cultural artefacts allow us to trace the history of popular art, political and cultural norms, and our ineffable relationship with the theatre of dreams.”

Though the exhibition closes in end-January, it may not be the last of it. Enquiries are pouring in, right from the National Rail Museum to even the London Transport Museum. “These posters hark back to the masses and tastes of a particular period. How the artists changed, how movies evolved…,” explains Thakral. “And of course, Bollywood is big everywhere!”