George Nakashima's iconic grass-seated chairs up for auction at Saffronart 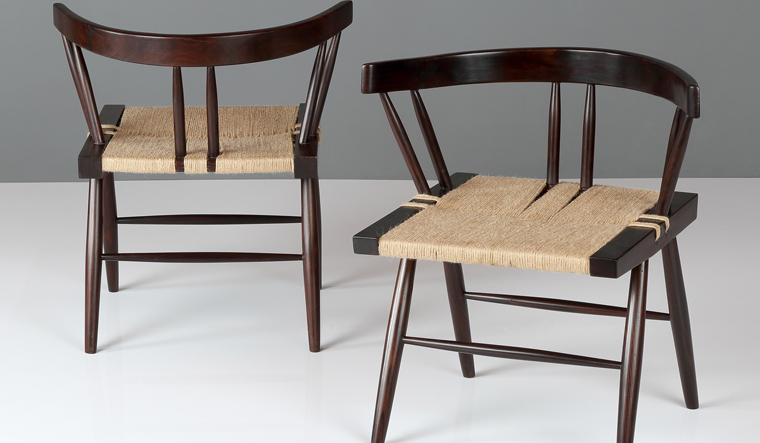 On October 21, 2016, an exhibition titled The Free Edge—George Nakashima’s legacy at National Institute of Design opened at the storied design institute in Ahmedabad. The show explored the NID heritage of George Katsutoshi Nakashima, a famous Japanese-American woodworker and architect, by showing and rethinking the precious furniture collection that Nakashima had designed for the institute when he was there for three weeks in 1964.

One of the furniture pieces was an antique grass-seated chair in dark walnut-brown, built in the traditional Japanese woodwork style, estimated to be Rs 2.6 lakh. Two boys wearing hats had trooped in to the exhibition venue on November 19, a CCTV footage showed, and walked up to the chair. They soon covered it with a sheet and carried it out of the institute, went to the back of the premises, loaded the ill-gotten object into their car and drove off, according to one version of the events. Newspapers in the city widely reported the theft, pointing to lax security arrangements in the campus. But one of the thieves panicked after reading media reports and came out to his parent about the stolen object hidden in his car. Aghast, his parents took the matter into their hands and returned the valuable chair to the NID general administrator on December 1. The chair thieves were product design students. They showed enough remorse for NID to retract its complaint. "Their only interest, as students of product design, was to study the chair design closely and learn from it,” their counsel Pitambar Abichandani had said then.

Be that as it may, the seminal position that Nakashima holds in the galaxy of celebrated architects and designers of the 20th century is borne out at Saffronart’s annual The Design Sale from August 8-9. It features 59 lots of furniture from across India, with a larger focus on the art deco style in its varied cabinets, tables and seating. Also on offer among the lots are two grass-seated chairs, designed in Ahmedabad, infusing Nakashima’s spiritual aesthetic into Indian rosewood, estimated at Rs 1.8 – 2.2 lakhs. Lot 38 is a grass-seated stool, (George Nakashima), pegged at Rs 1.25 – 1.75 lakhs.

The Japanese-American designer has a deep India connect. Born in Spokane, Washington in 1905, Nakashima studied forestry and later architecture at the University of Washington. He completed his Masters in architecture from MIT and travelled extensively thereafter. He came to Pondicherry in 1937 to build Golconde, the dorm for Sri Aurobindo Ashram, with Czech American architect Antonin Raymond. Golconde would become India's first reinforced concrete building, an early example of modernist architecture in the country. This trip to India was Nakashima's first encounter with Indian culture and spirituality. He became attached to the philosophy of Sri Aurobindo and was affectionately named "Sundarananda" in 1938. The intense spiritual experience and ethos of the ashram informed much of his outlook later on. He soon excelled in furniture design and woodworking and gained international renown.

Gira Sarabhai, co-founder of NID, invited Nakashima to Ahmedabad in 1964. He spent three weeks in the three-year-old design institute's wood workshop, designing chairs, benches, tables, ottomans, lounges, daybeds, shelves and mirror frames. They were produced under his nose, while he was in residence. They kept being produced in limited numbers at the institute by drawing on the detailed drawings and instructions left by Nakashima, until about 1975, when Sarabhai stepped down.

Furniture, according to Nakashima, was an extension of the life of a tree. He allowed the innermost features of natural wood, the burls, knots and grains to permeate his craft. "The design for the grass-seated chair by Nakashima has been dated to 1944, and continued to be manufactured using American Black Walnut and other woods in his studio in the United States until much later. Students who studied at NID in the 1960s recall him being in the NID studios and recount that Nakashima was deeply interested in the specific properties of local timbers such as teak and rosewood. The chairs made in India were exquisitely crafted and yet, distinct from their American counterparts due to the use of locally available materials. They embodied Nakashima’s spiritual aesthetic and the unique beauty of the wood he so admired," says Saffronart.