Hurdles in the sky 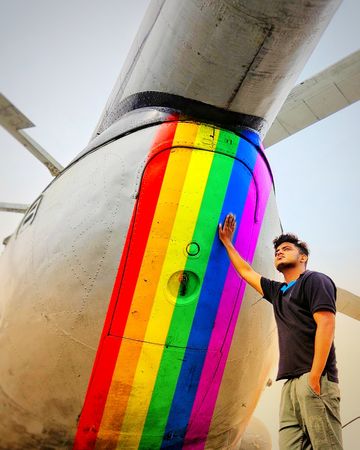 Adam Harry can fly, but India’s callous rules will not let him.

The 23-year-old, who holds a private pilot’s licence from South Africa, had become India’s first transgender trainee pilot in 2019, when he enrolled at the Rajiv Gandhi Academy for Aviation Technology, Thiruvananthapuram. The following year, though, he was grounded by a regulatory barrier. The Directorate General of Civil Aviation (DGCA) declared him “unfit to fly”, saying he had “gender dysphoria”—the sense of unease transgender persons may have because of the mismatch between their biological sex and gender identity.

Harry hails from Kerala’s Thrissur district. He was in his early teens when he began dissociating from his female identity. For the past four years, he has been undergoing hormone replacement therapy, which he says led to the DGCA’s decision to declare him unfit. On July 27, 2020, Group Captain Y.S. Dahiya of the DGCA’s medical services department wrote to him that he would not be classified as “fit to fly” as long as he was on therapy.

“My identity is that [of a man], and I want to express my identity on my body,” says Harry. “That is why I went through the transition. I did that because I am loving myself and that I want to live as myself.”

Harry's dream of becoming a pilot started around the same time he began transitioning. “By the time I reached high school, I was familiar with the term transgender,” he says. “Initially, I thought this feeling [of being trapped in a body belonging to the opposite sex] was something happening only to me. Then I saw articles about transgenders, and the landmark NALSA judgment of 2014 [in which the Supreme Court affirmed that transgenders have full recognition in the eyes of law]. Those gave me more insights.”

Initially, there was no one to support him in his difficult journey—not even his dear ones. “I didn’t have to tell my family—they knew from my behaviour and clothing,” he says. “Everyone would curse and shame me.”

He got the courage to come out socially after he completed class 12 and went to Johannesburg to train as a pilot. “I got in touch with the LGBTQ community there, and came out socially,” he says. “My family soon asked me to come back to India; they have not accepted it yet.”

Family and financial issues forced him to return to Kerala. He left home in 2018, moved to Kochi and began doing odd jobs to support himself. At 19, he took a decisive step in his transition—to start hormone therapy. “In the first stage, we have to consult a psychiatrist,” said Harry. “Because we have to understand what all changes would happen, and be able to adapt to all changes and the complexities involved in those changes. We have to do this before any surgery or treatment. Then comes the endocrinologist, who will administer hormone therapy after first checking the hormone levels.”

Hormone therapy is a prerequisite for sex-change surgery. But people can opt for just the therapy. A lot of transmen go for “top surgery”—the removal of breast tissue—without opting for the bottom one. Some opt for metoidioplasty, a surgical creation of a penis using one’s existing genital tissue. Then there is phalloplasty surgery, which gives transmen a phallic structure with sensation, and urethral reconstruction, which would connect the urinary system to the new structure so that urine can pass through it. Transmen who wish to have penetrative sex can opt for prosthesis implant surgery as well. Hysterectomy—the removal of the uterus—is another surgical process involved in becoming a transman.

Harry says there is no one-size-fits-all approach to the gender affirmation process. “The decision to undergo surgery or continue with a standalone hormone therapy will vary from person to person,” he says.

It was in January 2020 that Harry applied for an initial medical examination by DGCA. But he was deemed “temporarily unfit” for flying. The reason cited: he was on cross-sex hormone treatment.

Harry was forced to stop the therapy to pursue his dream, but his endocrinologist advised that the therapy should be lifelong. He was in a quandary—he had to choose between his career and his transition.

Harry says the DGCA wrongly assumed that he had gender dysphoria. “Some initial challenges were there when I started the therapy,” says Harry. “For example, there was the cracking associated with my voice change. But I did not face any mental health issues. I have only enjoyed each hormone shot and the changes they brought.”

In July this year, media reports and the CPI(M)’s Rajya Sabha member A.A. Rahim brought Harry’s troubles to the notice of the Union ministry of social justice and empowerment. The ministry wrote to the DGCA that it needed to frame fair and separate guidelines and standards to test transgender candidates. The DGCA has now told Harry to reapply for a medical fitness examination.

“Use of hormonal replacement therapy is not disqualifying if the applicant has no adverse symptoms or reactions,” it said. “However, flying duties are not permitted while the dose of hormonal treatment is being stabilised, or until an adequate physiological response has been achieved.”

Harry says he has won a battle, but the war remains. “Earlier they wanted me to stop hormone treatment; the fact is that for many [transgender] people, hormone therapy will be a lifelong process,” he says.

Now that the DGCA has become sensitive to the issues involved, what are Harry’s plans? “I will reappear for the DGCA’s medical test,” says Harry. “But I will be going to South Africa to obtain my commercial pilot licence. I have been offered admission from Vulcan Aviation, an academy in Johannesburg. But I will come back. I am not going anywhere permanently.”