Here is why buying a pug is a cruel act

Pug is not a “typical dog” from a health perspective

Pugs are considered one of the “cutest” canine breeds. But a new study from Royal Veterinary College of the United Kingdom says that pugs can no longer be considered a “typical dog from a health perspective” and their breeding leads to a “lifetime of suffering”.

The study—that analysed the records of 16,218 pugs and 8,89,326 non-pug breeds—found that pugs were at higher risk for 23 out of 40 common disorders. The study points out that pugs are more likely to be obese; one in six pugs are obese compared to one in 15 for other dogs. Pugs are also 11 times more likely to have a skin-fold dermatitis. The study was published in the journal Canine Medicine and Genetics. 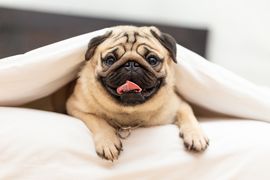 The “brachycephalic” features—variably shortened muzzle and a rounded, often massive, head—of pugs did not evolve naturally. Those were the results of genetic manipulation by selective breeding. The Lo-Sze dogs of ancient China are considered the predecessors of modern-day pugs. Historians suggest that pugs existed even in the 4th century BCE, and were developed as pets for the Chinese elite. Pugs came to Europe in the 16th century.

The flat-faced look with characteristic squashed nose appearance makes pugs “cute-looking”. However, this facial structure is responsible for a range of health issues faced by the breed. In April, another study from the RVC—that assessed 30,563 dogs from 18 breeds— revealed that short flat-faced breeds like pugs (7.7 years), English Bulldogs (7.4 years) and French Bulldogs (4.5 years) have a short life span.

Pugs have more skin on their face than they require, so they are at higher risk for skin infections. Soreness and itchiness are conditions commonly seen in pugs. Their “beautiful” tail is a “malformed vertebra” which may lead to more slipped discs. The pugs are, however, at less risk for developing conditions like heart murmur and aggression.

Veterinary experts warn that dog lovers should stop buying pugs. They also advise that existing pug owners should carefully watch for symptoms like excessive panting and breathing difficulties. Pugs require special care in hot seasons. They add that weight management is crucial as an “overweight” pug is at a greater risk to develop serious issues.