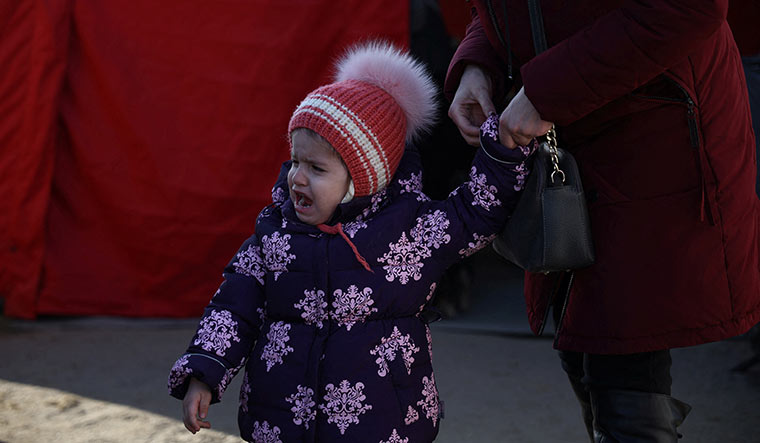 On March 1, WHO pointed out that routine immunisation and outbreak control efforts for polio have been suspended in Ukraine | REUTERS

Ukraine is at war—not just with its neighbour, but also with infectious diseases. The country has been facing troubles in controlling Covid-19. In the last two years, Ukraine reported more than 50 lakh cases and 1.12 lakh deaths because of Covid-19. On February 12, just 12 days before the start of the war, Ukraine had 42,967 new cases. According to Johns Hopkins University, only 35 per cent of the Ukrainian population is vaccinated against Covid-19. With the Russian invasion of the country raging for three weeks and more, prospects for health care are now bleak for Ukrainians.

Before the war, Ukraine had around 1,50,000 doctors, 1,630 hospitals, and 10,000 or so primary care facilities. However, several medical facilities have become non-operational since Russia started the military action. According to the WHO’s surveillance system for attacks on health care, Russians made 43 attacks on health care institutions, ambulances or personnel.

Access to primary care has been severely curtailed in Ukraine. It is estimated that more than 60 lakh Ukrainians require humanitarian assistance; more than 20 lakh have fled the country. The conditions in vehicles transporting people to the border are conducive to the spread of Covid-19 and other pathogenic diseases. A lot of Ukrainians have been forced to take shelter in bunkers and underground metro stations, with limited access to clean water, sanitation, and ventilation. All these are acute conditions that would increase the risk for the spread of Covid-19.

Health experts warn that the country may soon face a polio outbreak also if the conflict continues for too long. On March 1, WHO pointed out that routine immunisation and outbreak control efforts for polio have been suspended in Ukraine. This is worrying as last October Ukraine reported a polio case—a 17-month-old paralysed child—19 years after Europe was declared polio-free. Another polio-paralysed case was reported in January. Subsequently, the country identified 19 more children with a vaccine-derived form of poliovirus (but without symptoms). Ukraine started a nationwide polio immunisation programme on February 1. But it has been halted since the Russian forces invaded the country. Surveillance to detect and report new cases of polio is also disrupted.

Medical experts point out that there is a risk for a measles outbreak as well among Ukrainians. The country had seen many outbreaks in the past. In 2019, Ukraine reported 57,000 measles cases. Tuberculosis is also a major health issue in Ukraine. It is among the 27 high multidrug-resistant tuberculosis (MDR-TB) burden countries. More than 32,000 people develop TB each year in the country, and about 33 per cent of all new TB cases are drug-resistant. Another shocking data is that around 22 per cent of Ukrainians with TB are infected with HIV also—TB is the leading cause of death among Ukraine’s HIV patients. The country has over 2.5 lakh HIV patients—the second-highest in Europe. The United Nations agency for HIV/AIDS had recently noted that Ukraine’s stock of drugs for HIV patients might not last for more than a month. Even if the Russian aggression ends, Ukraine will have a major fight to continue—to avoid severe public health crises.