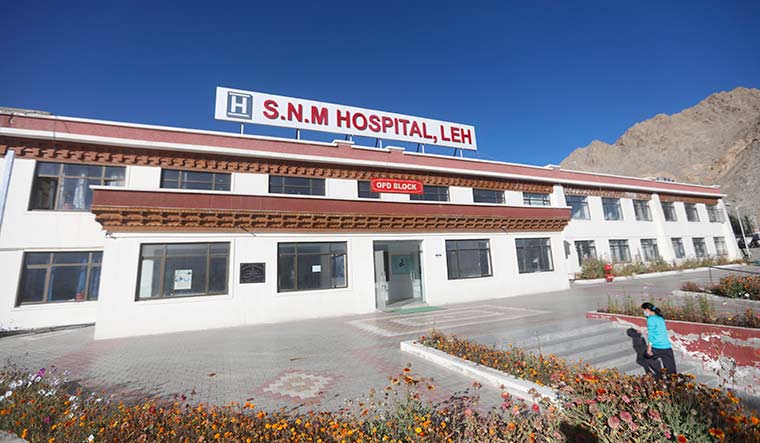 To the outsider, Ladakh may seem one of the most inhospitable places on earth. It is 12,000 to 18,000 feet above sea level, low on oxygen, bitterly cold and desert-like most of the year. But work at the Sonam Norbu Memorial Hospital in Leh never freezes over. This government district hospital is the only medical centre in India that works at above 12,000 feet and in minus 25 degrees Celsius. It is named after the heroic engineer Sonam Norbu, whose work saved Ladakh from being captured by Pakistan in 1948.

Born in Leh in 1909, Norbu graduated from the university of undivided Punjab and was at the peak of his engineering career when India and Pakistan were fighting over Jammu and Kashmir, and Ladakh, in 1947. By that December, Pakistan had taken over most of Gilgit-Baltistan and state forces were defending Leh in the biting cold. To assist them, Norbu crossed Zojila, the treacherous mountain pass that connects Ladakh with Kashmir, and built an airstrip for the Indian Army to land. It helped India thwart Pakistan.

In 1961, Norbu was awarded the Padma Shri. Norbu's son Sonam Wangchuk told THE WEEK: “He was not a politician; he would not stoop to cheap tricks to win elections but he led by example and won the trust and devotion of all he came across.” He added. “His whole life was a saga of hard work... [and] his overriding interest was the betterment of Ladakh and Ladakhis.”

Apart from the airstrip, Norbu also built a highway in Ladakh in his early years as an engineer; later, as Ladakh development commissioner, he undertook several projects and, in essence, became the architect of modern Ladakh.

Recalled Wangchuk: “Sheikh Sahib's (Sheikh Abdullah) earnest desire for the equitable development of all three regions of the state saw him bring back my father, who at that time (1975) was India's ambassador to Mongolia, as the state's works and power minister; (the ministry) controlled 70 per cent of the state budget.”

Norbu died in 1980, and the hospital was soon named after him.

The 250-bed facility, with 40 doctors and 230 other staff, does not have advanced infrastructure, but has all the basic services. The outpatient department is in the main building, a two-storey rectangular structure that almost touches the base of a nearby hill. It is open seven days a week. Some wards and laboratories are outside the main building. Help at hand: X-ray technician Ghulam Rasool says the hospital does around 150 X-rays a day in summer | Umer Asif

Dr Chawng Phunsugh, a senior consultant, said the hospital does all general surgeries, and only procedures that require super-specialists are referred to the Sher-i-Kashmir Institute of Medical Sciences in Srinagar. In summer, affluent patients may go to Delhi or Chandigarh for treatment, but in winter, when Ladakh is shut from the outside world, they all depend entirely on Sonam Norbu Memorial. For the poor, some of them from remote areas like Zanskar and Transingla, it is the only hope. For them, there are free medical camps that super-specialists from All India Institute of Medical Sciences organise at the hospital with the support of charities like the Ashoka Mission in Delhi. During one such camp in 2018, AIIMS doctors flew in 500kg of medical equipment and performed 27 surgeries. Last September, the Centre sanctioned the first medical college and a paramedical college for Ladakh.

The hospital generally receives a lot of cases of hypertension, acidity and joint pain, but its doctors have also conducted major procedures related to neuro-trauma, spinal tuberculosis, and neonatal and plastic surgeries. Such efforts have earned the hospital awards and international scholarships.

“In neuro-surgery, we do epidural haematoma,” said Dr Padma Deskit, Ladakh’s first female surgeon. The procedure involves removing blood clots between the skull and the membrane that surrounds the brain. The first such surgery at the hospital was done in 2016. “The patient was a young recruit who had left the Army,” said Deskit. She said the BJP block development council chairman also underwent the procedure recently. “He was injured in a car crash,” she said. “Arrangements had been made to fly him out to Delhi for surgery, but because of bad weather the evacuation did not happen.” 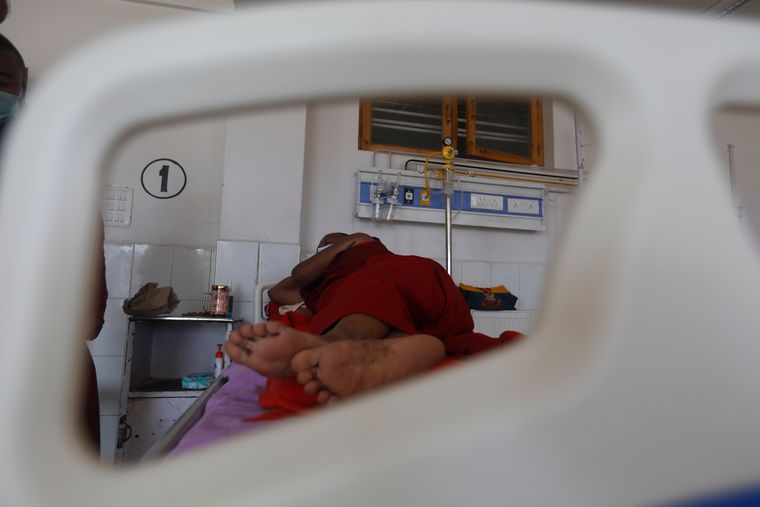 A variety of fixes: Sonam Lamo, who had an MRI done for his persistent headache, said that, in Leh, the facility was only available at the SNM Hospital | Umer Asif

The most complicated surgery at the hospital was the chronic subdural haematoma on a migrant labourer. The procedure involves drilling small holes in the skull to relieve pressure and allow movement of blood and fluids. Before the operation, surgeons create an opening at the front of the neck to insert a tube into the windpipe (tracheostomy) for breathing. “Managing a tracheostomy in an arid region for a fortnight led to the formation of mucus in the tube due to zero humidity,” Deskit recalled. “And having no air conditioning was a challenge in itself. But through a jugaad, we pulled it off and the patient survived and is now doing fine.”

During the complex procedure, the surgeons here remained in touch with neurosurgeons at AIIMS and Sher-i-Kashmir Institute on WhatsApp. As internet services in Leh were erratic, it took a long time to upload the images. The surgeons had to run around in the hospital for a spot with better connectivity.

During emergencies, doctors at the hospital often seek guidance from specialists outside. “Some time back, I had to operate on a three-month-old,” Deskit said. “Since we do not have paediatric anaesthesia at the hospital, we did the surgery under the guidance of Professor Rajinder Prasad of AIIMS. After the surgery, the baby was fine.” For her exceptional work in a place like Ladakh, Deskit was awarded a scholarship by the Royal College of Surgeons in England. “The training was beneficial for me, and I learned a lot,” she said.

Though there is a lack of specialists, doctors here also do flap surgeries—a technique in plastic and reconstructive surgery where tissue is lifted from a donor site and moved to a recipient site with blood supply intact. “Such surgeries require a plastic surgeon, but we do it with the help of experts like Dr R.K. Srivastava, who heads the department of plastic surgery at Safdarjung Hospital,” said a doctor. “Whenever we get a complicated case, he guides us.”

The orthopaedics department conducts more than ten surgeries every week. “We only refer cases that are not in our competence,” said Dr Anwar Hussain, an orthopaedic consultant. “We also do spinal tuberculosis surgery and Ilizarov (a technique to lengthen or straighten bone and soft tissue),” he said. 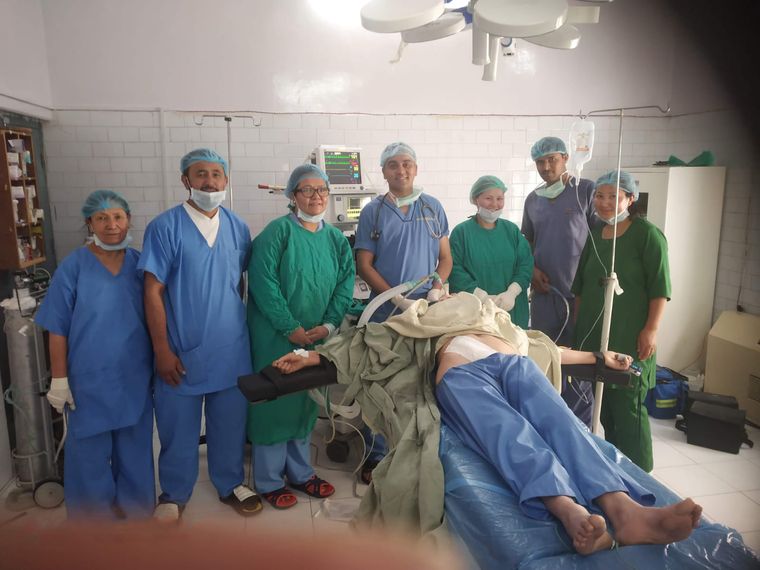 According to one of the doctors, there has been a recent increase in cases of high-altitude cerebral oedema (HACE) and high-altitude pulmonary oedema (HAPE). The former is often characterised by ataxia (impaired muscle coordination), fatigue, and altered mental status. It generally happens to tourists and migrant labourers whose bodies are not used to the sudden change in altitude.

HAPE constricts vessels in the lungs, resulting in increased pressure. This leads to fluid leaking from the blood vessels into the lung tissues and eventually into the air sacs. “Earlier, such cases were reported in soldiers deployed at higher altitudes in Ladakh, like Siachen,” said Deskit. “But now, we are witnessing increased cases of vascular thrombosis (blood clotting) among tourists, whose footfall has increased after Ladakh was declared a Union territory, and in migrant labourers, who are arriving in large numbers to work with the Army in the aftermath of the border issues with China. Some people are also becoming blind in summer and in winter. There is a need for research to understand why this is happening.”

Over the years, the hospital has developed expertise in dealing with HACE and HAPE cases, and has reserved special wards for these. In one such ward, Subhas, a chartered accountant from Kolkata, was being treated for HACE in November. “My family and I arrived in Leh a few days back and we went sightseeing to Pangong and stayed there for the night,” he said. He came to the hospital as he was feeling breathless. The doctors treating him said his oxygen saturation was becoming normal.”

In another ward, Stanzing Thanchi, a monk from Spituk Monastery, was being treated for hip fracture. “I came here a few days back and will stay till I make a full recovery,” he said. “This is the only place in Leh during a medical emergency.”

Dr Lobzanag Dasa, an ENT surgeon, said the doctors were well qualified to detect all malignancies, but lacked facilities to treat them. “Malignancy and cancer-related cases are referred outside,” he said. “We need facilities for radiotherapy and chemotherapy and an ICU for post-operative care.”

One of the busier departments at the hospital is dentistry. Department head Dr Phunsung Narboo, who did his MS in dentistry from Post Graduate Institute of Medical Education and Research in Chandigarh, said, “On average, we treat 50 patients daily. We are well-equipped and also have a dental CT scan to diagnose cancer, musculoskeletal disorders and infections.” The department also has an orthopantomogram (OPG) for a panoramic image of the teeth. “But we do not provide orthodontic treatment (correction of malpositioned teeth and jaws) yet,” he said.

The hospital has well-trained paramedical staff and technicians like Kesar Dawa, who operates the CT scanner, and radiologists Tashi Namgyal and Deachen Angmo, who run the MRI unit. “We do about 15 CT scans a day, and the facility remains open round the clock,” said Dawa. He said the hospital arranged for his training to operate the machine before its installation.

Namgyal did a three-and-a-half-year training course in radiology in Delhi, and Angmo did a two-year course in Chandigarh. “The MRI was installed in August this year,” said Namgyal.

Sonam Lamo from Nubra, 116km from Leh near the Line of Actual Control, said, “I have a regular headache, and a doctor prescribed an MRI. This facility is not available anywhere in Leh except this hospital. So I came here. My doctor wants to understand the cause of my constant headache.”

The X-ray and the ultrasound units are the busiest. “We do about 150 X-rays a day in summer because of the presence of migrant workers and tourists. In winter, it is less,” said technician Ghulam Rasool. Rukhsana Parveen, who operates the ultrasound machine, said at least 70 patients came every day from all over Leh.

The doctors here have noticed a rise in stomach cancer cases in Ladakh. They attribute it to excessive consumption of gur chai (butter tea), salted meat and dry food in winter. Increase in breast cancer and colorectal cancer among the rich, doctors said, was because of lifestyle change. Deskit said a study had found that H. pylori, a bacteria found in the stomach, is higher among inhabitants of Ladakh. “There is a need for research on that,” she said.

During the peak of the Covid-19 pandemic, the hospital worked on a war footing. It first reserved wards for Covid patients and then initiated testing. “We never had a shortage of oxygen even during the peak,” said medical superintendent Dr Nurzin Angmo. “We are thankful to Prime Minister Narendra Modi for providing us with an additional 1,000 litres per minute oxygen plant. Now we are self-sufficient and do not need to buy oxygen from private vendors.”

It might not be the most advanced, but what SNM hospital lacks in infrastructure, it makes up for with dedication and heart.