CRY from the heart 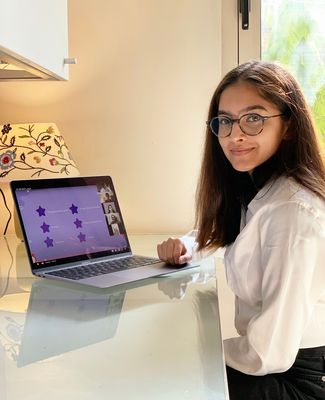 Last year Jiya Udenia, 21, decided to join her parents in Tel Aviv where her father is a senior diplomat with the Indian embassy. Jiya flew from Delhi in April even as the deadly second wave of the pandemic was raging, and no sooner had she completed the mandatory weeks of quarantine in Tel Aviv when fighting escalated between Israel and Palestine.

“It was a nightmare. Despite being a safe diplomatic zone, our residential area became the target of rocket attacks.And while several were intercepted, one rocket did land in the sea close to our house. The war noises were deafening and there was a constant sense of danger. Hours were spent in underground bunkers. I spent sleepless nights and was very disturbed. But then, therapy came from a very unusual source,” Jiya told THE WEEK from Tel Aviv. She is a volunteer with CRY (Child Rights and You) and is taking online classes for underprivileged children in Delhi. It provided her the much-needed distraction, and peace, in the war zone.

Jiya is one of 3,000-odd volunteer facilitators of CRY's online mentorship programme. They engage with 4,800 underprivileged children from 13 states to provide them a safe and interactive space to learn and to spend time with peers, even as schools remained mostly closed during the past two years.

“I was always interested in doing something that would help society, and I love spending time with children. The CRY online mentorship programme caught my attention and I volunteered,” she recalled. “But within a few weeks, I was in Tel Aviv and almost close to giving up. However, I kept remembering my interaction with children, and how it made me happy. It was therapeutic for me. I never shared my harrowing experience with children; just interacting with them gave me strength.”

An unusual bond has developed between Jiya, now a student of MA in security and diplomacy with Tel Aviv University, and the children of Kanak Durga settlement in Sector 12, R.K. Puram, Delhi, as they find mutual succour.

Said Soha Moitra, regional director, CRY, north zone, “CRY believes that volunteering not only helps and supports underserved communities, it is a mutual connection and helps even volunteers. Jiya and children from her classes are one such example, where they helped each other in coping with the worst situation. She might not have ever thought that children as young as eight years old will become her biggest strength amid such distressing situations. Similarly, for children, Jiya and many other volunteers are like a window to explore the world amid limitations.”

CRY was started in 1979 by Rippan Kapur and six friends who volunteered to spend Rs 50 each for the better future of children from underserved communities. Today it impacts more than three million children in various ways. “This is the power of volunteering and its need is much evident in the current situation,” said Moitra.