Guided by heart: Ajay Lalwani during his journey.

You don’t dream with your eyes, but your heart, says Ajay Lalwani, who is 100 per cent blind. And if you are an adventurer at heart like him, then your dreams know no bounds.

Lalwani’s latest adventure saw him cycling 7,500km across 12 states, from Mumbai to Srinagar to Kanyakumari and back to Mumbai. And, all for a cause—road safety.

But a cause that underlines all his adventures or attempts at them is to show the visually impaired in a new light. “Through whatever I do, I want to create awareness about what a blind person can do,” says Lalwani, 25. “Some people even ask stupid questions like, ‘How does he eat if he is blind?’ I want to change that thinking.”

Lalwani was not born blind, but he has little information about what went wrong with his eyes. “I don’t know when I went completely blind,” he says. “I was told by my family that I could see a bit when I was a child. But as far as I can remember, I have always been blind.”

Lalwani was born to a homemaker mother and a fruit-seller father in Ulhasnagar, Thane district, Maharashtra. He has three elder brothers and a younger one. It was when his father or brothers took him to school on a cycle that Lalwani first harboured the desire to ride one on his own. He started cycling on his own when he was seven or eight and has not looked back since.

In 2019, he did a Mumbai-Goa-Mumbai expedition. In 2020, he cycled to and from Gondia in Maharashtra. But it is not just cycling that has him hooked. He swims and treks, too. “Who doesn’t want to be fit? So, I have been focusing on sports activities for 15 years now and have won some medals over the years,” says Lalwani, who plans to complete his graduation next year. But adventure is key for him. “I want to do something that no other visually impaired person has done before,” says Lalwani, who works as a telephone operator with the Brihanmumbai Municipal Corporation and lives alone in an office accommodation in Worli.

And that thought drives all his adventures. That is how and why he came up with the Blind Cycling Expedition, which began on November 15 and ended on December 29, 2021. But it wasn’t a smooth ride all along. “I had been practising for the expedition for more than a year and exploring sponsorships,” says Lalwani. “I had approached many companies, but got no response. Then I started crowdfunding. The initial response was good but after a while there was none.”

While the crowdfunding didn’t help much with funds, it did help him with contacts. Lalwani met a person who helped him get in touch with Signify (previously Philips Lighting). “I soon met with [Sumit Joshi, CEO and MD, Signify Innovations India Ltd-South Asia] and explained what the expedition was all about and he came on board because road safety was a cause close to Signify as well,” he says. 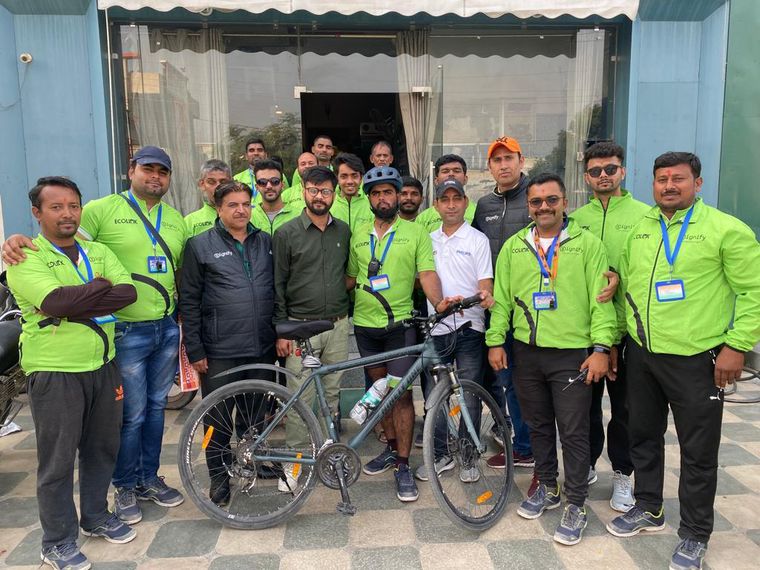 Lalwani’s team comprised five navigation coordinators, drivers, a cook, a masseuse and a photographer. One of his elder brothers, too, joined him.

Lalwani cannot stress enough about the importance of road safety. “Even during our expedition, we found that around 3,000-3,500km of our roads are either dug up for works or in a bad shape and have been neglected by the authorities,” he recalls. “Roads do not have lights. Along with creating a world record, we also wanted to create awareness about road safety. So many accidents take place on highways. We also witnessed many accidents while on the journey.”

Signify not only sponsored the expedition, but also helped promote it on social media. Its employees also made it a point to welcome and felicitate Lalwani and his 15-member support team every 200km and offer any help required. “[Lalwani] has cycled on his fair share of roads and highways across India and during his journeys experienced firsthand how lack of adequate illumination on roads can result in increased incidence of accidents,” says Nikhil Gupta, head of marketing and integrated communications and commercial operations, South Asia, at Signify. “Through this campaign, we wanted to draw the country’s attention towards the importance of adequate street lighting for enhancing road safety.”

Lalwani’s team comprised five navigation coordinators, drivers, a cook, a masseuse and a photographer. One of his elder brothers, too, joined him—a first in all his journeys so far. The team would travel in two cars, one in the front and the other behind him. “I had invited people who were interested in sports to join the expedition as volunteers,” says Lalwani. “Five people from different districts joined us as navigation coordinators. The rest were hired for different roles.”

The navigation coordinators were his eyes on the road. Two of them would sit in the car’s trunk and give him instructions via walkie-talkie. “We would change volunteers every three hours so that there was no room for error, as that would have resulted in me falling or getting hurt,” says Lalwani. “Despite that, I did fall a couple of times, either owing to a misunderstanding or my inability to hear the instructions clearly. But we have learnt from it and used new tricks, too.”

This was the first time that Lalwani was able to use cars; his previous expeditions involved either navigation coordinators on cycles or bikes. Also, he used a cycle with gears for this expedition. As backup, he had carried two cycles—one with gear and one without. He was planning to use the non-gear one for this journey as well, but experienced cyclists advised against it.

That was a good call as it proved helpful during the most challenging part of the journey. The stretch between Udhampur and Srinagar was particularly difficult because of the incline and the cold weather. If he had used the non gear cycle, he would have struggled to walk all the way up through the narrow ghats with the cycle. During the journey, the brakes of both his cycles had failed. But Lalwani managed to keep himself from hitting the stone wall on one side or falling into the valley on the other. “My cycles were injured, but I wasn’t,” he says. He later repaired the brakes on his own. “The soldiers stationed there offered help, but I told them that I can repair it,” he says.

Gupta shares a navigation coordinator’s experience in Kashmir: Lalwani was carrying the national flag on his bicycle and soldiers posted in the area started saluting the flag. “It was a proud moment for the entire team,” says Gupta, adding that random strangers stopped to assist the team.

Agrees Lalwani, who says that villagers would help them with whatever they needed. Lalwani and his team would not always find hotel accommodation; at times they would pitch tents at the edge of forests. “This was not just a cycling expedition, but an adventure, too,” says Lalwani. “We camped near forests, spoke to villagers, who were very helpful when we needed anything. I didn’t want to feel that despite travelling the country, we did not have fun.”

Lalwani is now all set for his next adventure—climbing Mt Everest in 2023. “This year,” he says, “will be all about preparing for that.”

3am – wake up, freshen up, black coffee and eggs for Ajay Lalwani, breakfast of choice for others