Thrill of the chill

The benefits and risks of cold water swimming 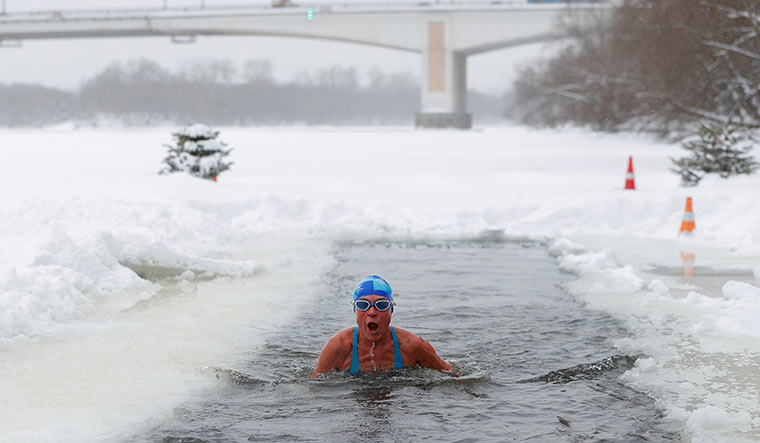 The first time I met Dr Lucky Meisenheimer, he was in a tiny speedo swimsuit, with a mask, dark glasses and a big stick. Well, I know what you are thinking, and no, it was not anything too exciting, though I still do not get what the stick was about. We had just finished the Lucky’s Lake Swim in frigid temperatures. Lucky was a tall man with the lanky build of a swimmer. He is 64 years old, but not much fat on his body. He banged the stick on the ground—it was like a scene out of Survivor—and we did the obligatory photo-op. He then went into his lap pool and started gliding through the water with the effortless and enviable rhythm of a seasoned swimmer.

Lucky Meisenheimer is one of those multitalented individuals. A practising dermatologist, the patron saint of open water swimming locally, and a writer, actor and film producer. He holds multiple open water swim master’s records, but what endeared him to the local swim community is opening his home and organising the one-kilometre swim up and down Lake Cain. He and his team of volunteers cleaned up the lake—the swim course is marked with buoys—and the theme is to make it past the gators, which are omnipresent in every freshwater body in Florida.

Open water swimming in the cold water during the winter months is a different ball game. You have to be aware of your body response to cold water, or you could get into serious trouble. Coldwater swimming (water temperature between 15-200C) can be broken down into three parts: getting in, the swim and the post-swim warm-up. The moment you get into cold water, the shock of the cold water causes immediate loss of breath control, causing rapid breathing, a rapid increase in heart rate and blood pressure. This sudden change can lead to a heart attack and cardiac arrest if you have a pre-existing cardiac condition. The sudden gasp can also cause you to inhale water and the inability to hold your breath can cause drowning even in good swimmers. Another fatal response is a condition referred to as laryngospasm or dry drowning. Here the vocal cords go into spasm when a little water enters the trachea. One way to avoid initial shock is gently immersing yourself and standing up for 60-90 seconds till your breathing is under control.

Once you start swimming, the cold causes your blood vessels supplying your muscles and nerves to constrict, and divert blood to keep your core warm. This causes our muscles to lose coordination, become stiffer and also stop working. The shoreline for an easy swim may suddenly be out of reach. Once out of cold water you can get dizzy as the blood pressure response is blunted, coupled with dehydration. It may take 30-40 minutes to rewarm, which accounts for the prolonged shivering that takes place as your core slowly rewarms. Driving during this time is hazardous as response time may be delayed.

I spoke to a colleague who had attempted the dreaded English Channel twice. On both occasions, he lasted two and a half hours, in 140C water, despite training and completing a ten-hour swim under similar temperatures. The tide and current were not in his favour.

We were scheming on doing Lucky’s Swim for a while, and when one of the crew suggested that we would swim it the coming weekend, I jumped at it. I looked at the weather and a cold front was coming in. The temperature was projected to be 30C with the water temperature 150C. The swim was to start at 7am, and it was still dark when I got there and parked at Lucky’s house. It was freezing and once the entire crew was there, one of the volunteers, Jay, went through the briefing. After checking that we were not complete novices, he went through the route and the rules. He then assured us that if the gators got us, they offered a FedEx service for our body parts.

There was a man from Pittsburgh in a tiny swimsuit, waving his arms in the cold trying to warm up. “Let me show you boys how it is done”, he said, grinning as he went into the water. He was part of the Polar Club. There is documented evidence that cold water swimming activates endorphins, helps with depression and, believe or not, increases libido. Also, repeated exposure to cold water swimming helps your body react better to the stress of cold water, which in turn helps you react to stress better daily, a process called ‘cross-adaptation’.

There were five of us, including two women who were the best swimmers. It was cold and dark when we got in. Despite all my medical knowledge, I dove right in with the others. In addition to being the slowest swimmer, I am also the worst with direction. I could not see well as it was dark, and unfortunately, I had brought my dark goggles. As I was swimming, I heard my name being called when I came up and saw that I was swimming away from the group—it is pretty easy to lose the sense of direction in an open water swim. The rest of the swim was enjoyable, as the body adapted to the cold water—it was exhilarating. We did the up and down kilometre pretty easily.

Let us go again, Naomi the lead swimmer suggested, and before I could think they were off. All my hypothermic knowledge went out into the cold water and I followed. I could feel my muscles stiffening on the way back, but we still made it without much effort, and that is when the hypothermia set in for the group. We warmed up, took the pictures, signed the wall of fame. I promised to come back again with my son, who is a high school swimmer, when it was warmer. The gators will be more active, but hey, there is always FedEx.