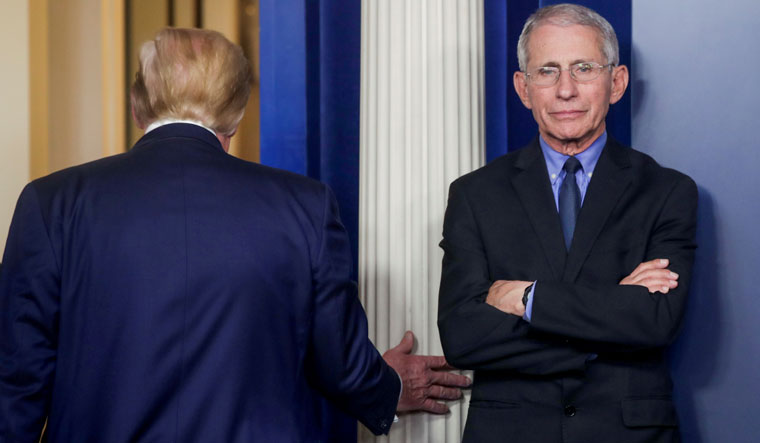 At odds?: US President Donald Trump departs after the Covid-19 task force daily briefing in March as Dr Anthony Fauci, director of the National Institute of Allergy and Infectious Diseases, stands by at the White House in Washington | REUTERS

There is a rare honour in Washington, bestowed upon any hardy official who appears on all five of the big Sunday talk shows in a single day. They call it the “full Ginsburg” after Monica Lewinsky’s lawyer William H. Ginsburg, who first scaled this political Everest back in 1998.

Near the height of the Covid-19 pandemic, this distinction took on a new name. “The full Ginsburg became the full Fauci,” says Dr Anthony Fauci when we meet over Zoom, with pride only a seasoned resident of the Washington Beltway could feel.

For a while you could not turn on a television without seeing the diminutive doc. “In Fauci we trust” became the pandemic’s clarion call, plastered on bumper stickers and coffee mugs. The director of the National Institute of Allergy and Infectious Diseases was dubbed “America’s doctor”, his face adorning everything from T-shirts to doughnuts. A Fauci bobblehead doll was created. Thousands signed a petition for People magazine to anoint him the sexiest man alive. He became a meme—and a hero.

Through the long painful months of the pandemic, Fauci has been America’s healer-in-chief, his calm, experienced pragmatism presenting a stark contrast with the volatile president. Fauci has been Donald Trump’s foil, injecting science and sanity into the chaos of the now defunct daily Coronavirus Task Force briefings.

One poll in April gave Fauci a national approval rating of 78 per cent, with just 7 per cent disapproving. Then Fauci disappeared. There was speculation of a rift with the president. Had he committed the cardinal sin of any Trump-era official—becoming more popular than the boss? Was he sidelined?

“Absolutely,” he laughs in typically blunt fashion. “What changed is that the focus is now on economic reopening, so I am on the bench.” For Fauci to appear on prime time, he has to be cleared by the White House, which means no more full-Ginsburgs for him. “I still get the same number of requests from all the networks and all the cable channels,” he says. “I just do not get cleared.”

But there is an “advantage” to being dropped, Fauci points out, which is more time to focus on developing a coronavirus vaccine, the mission that now consumes him. A lesser benefit is that he finally has an hour to spend on a video call with me, reflecting on all that has happened to him—and the world—in the past few months, and what might come next.

It is 7am when we meet—mid-morning for the famously industrious doctor. He is at his desk in Bethesda, Maryland, trim and compact as he is on the telly, wearing a crisp button-down shirt and thin blue tie. At first glance Fauci’s office looks a lot like your average doctor’s lair—pictures of his three daughters on the wall, medical dictionaries and case files on the shelves. Then you spot framed photos of him with American presidents—and you realise that this man has carried the health of a superpower on his shoulders for almost five decades, never more so than in 2020, at the age of 79.

“It has been extraordinary,” he says, in his familiar husky Brooklyn accent. “My life was untenable at one point. I was literally getting three or four hours’ sleep a night. I was constantly in front of the cameras, dealing with a deadly outbreak that is devastating the planet, with all the political undertones, constantly walking on eggshells.”

Sometimes those shells cracked. For all Fauci’s popularity, a small minority of Americans view him as the devil incarnate, “Dr Doom”, the bureaucrat who hoodwinked Trump into shutting down the country for no good reason. Wild conspiracies have circulated about his ties to Big Pharma and the “deep state”.

What came next were “credible” threats to his life along with persistent harassment of his wife, Christine Grady, and their daughters. “They hack into their emails and iPhone accounts and send threatening obscene emails,” Fauci says. He does not go anywhere now without Secret Service protection.

It is not the first time the doctor has found himself under attack. As a newly qualified physician in 1966, Fauci was drafted for Vietnam and served his military obligation as a “Yellow Beret” at the National Institutes of Health (NIH). He has been there pretty much ever since, advising six presidents all the way back to Ronald Reagan, working on ebola, zika and swine flu. Back in 1981, a baffling new virus emerged that attacked the immune system and was particularly prevalent among gay men. Then a young immunologist, Fauci threw himself into researching HIV/AIDS within weeks of the first cases being reported. It “transformed” his life, but also made him the poster boy for the medical establishment’s intransigence over HIV. “Anthony Fauci, you are a murderer,” wrote Larry Kramer, the playwright, film producer and LGBT rights campaigner, as furious gay activists marched on the NIH chanting “F*** you, Fauci”.

“AIDS was a bigger challenge [than the coronavirus] over time,” Fauci reflects, describing the 1980s as a “very dark” period in his career. “The ultimate death toll was enormous, about 38 million accumulating over almost four decades. We still have over one million deaths a year.” Yet, progress on treatments was made, and Kramer, who died this year, became a close friend.

Over the years it has been the possibility of a pandemic such as Covid-19 that has truly kept Fauci up at night. This pandemic was his “worst nightmare coming true”. Pitch perfect: Dr Fauci after throwing the ceremonial first pitch prior to the game between the New York Yankees and the Washington Nationals at Nationals Park in July | AFP

Being the spokesman for a once-in-a-century pandemic is undoubtedly a challenge, but doing it at the behest of Donald Trump has been uniquely demanding. One of the enduring images of the pandemic is the Fauci “facepalm”, when he reacted in despair as Trump used a Covid-19 press conference to lambast his own state department. The president has recommended injecting disinfectant, persistently touted hydroxychloroquine (on thin medical grounds) and treats science like a ball of silly putty, to mould as he sees fit. Does it bother Fauci?

“Of course, it is frustrating,” he says. “You have to go with the science, so when you hear statements like that made apart from the science, it gets frustrating. At the end of the day, though, the science and the evidence will always prevail.”

During the early days of the coronavirus, Fauci says, he was “pushing” the White House to lock the country down before the decision was made. He was “very concerned” about the British experiment with herd immunity. Does he now view the delay as a fatal error? “If you lock down at a certain time and you see cases start to get controlled, you almost have to make the conclusion that if you had locked down earlier, you would have been better off,” he says.

“It would have been better to do it earlier. But the information we had at the time was not as compelling. I can assure you that if we had tried to lock down America with 12 cases and one death, the country would have thought we were crazy.” It is worth noting that other, smaller countries did manage the task.

Fauci’s relationship with Trump, he says, is “really quite good. We are both from New York, we are both from the same generation, we both have a no-nonsense style about us. There is that kind of closeness.” Professionally, though, they are apples and oranges.

Fauci is not given to mindless boosterism, so when he says he hopes to have 200 million coronavirus vaccines by the start of 2021, that is cause for real—if cautious—optimism. Why is he so confident? There has, after all, never been a vaccine developed for HIV, which Fauci has been working on for almost 40 years.

“A big clue as to whether you will be successful in developing a vaccine is what the body is able to do against natural infection,” he says. “There are no instances of the body completely clearing HIV of its own accord. Then you come to the coronavirus and the vast majority of people who get infected ultimately clear the infection, which means that the body is capable of making a good response. This tells me that, even though there is no guarantee, it is likely we will be able to develop a vaccine that induces the kind of response that protects you from infection.”

Over his many decades of waging war on infectious disease, Fauci credits running with keeping him sane. It is a “meditative” process for him. As the years have advanced, he is now more likely to be found power-walking whenever his schedule permits, which can often be in the middle of the night.

Gripped by fear of the virus and the emotional turmoil of lockdown, Americans found comfort and assurance by latching on to the running doctor. “It certainly surprised me,” he says, viewing it through the prism of the two Faucis—real and symbolic. “There is Tony Fauci, me, who my friends and people know. Then there is this symbol, which the country and the world actually needed. They needed someone who was honest, who had high integrity, who would tell it like it is during a period of great stress. By accident I was thrown into a very visible position.”

During one April interview Fauci was asked who he wanted to play him on Saturday Night Live. His answer, naturally, was Brad Pitt. Following the immutable laws of American show business, Pitt then quickly appeared as “Fauci” on the sketch show, reportedly making the president jealous.

“This figure is not really me,” Fauci insists. “I am not a sex symbol. I do not look like Brad Pitt, even though I wish I did. The one thing I do not do is take that seriously. If I started to take that seriously I would not be me. I think I am a pretty humble guy. I know it is just symbolism and not me.”

Fauci certainly seems to enjoy the spotlight and the celebrity chitchat, but the conversation always comes back to science and, of course, the pandemic. “Obviously this is a very, very difficult situation we are in,” he says. Come winter, he believes we may have “another resurgence, which could really be terrible”.

Even as the coronavirus rages on, many scientists are busy predicting another pandemic in the years to come. Does Fauci think we will see further disaster? “I fear we will,” he says. “With all of the other distractions in the world, our memory is short-lived.” He recalls failed attempts to build the strategic stockpile for protective equipment and ventilators following bird flu in 2005. “You would not imagine the pushback we were getting. Our memory for bad things is short,” he says.

Given Fauci is approaching his ninth decade, someone else may have to spearhead that next battle. How, I wonder, does he reflect on his long reign in public health? “I hope I will be remembered as somebody who devoted [his] entire life to bettering the health of my nation and the world,” he says. “I am going to have to stop one of these days. I just hope I do it willingly.”

It has been a “full and challenging” life, he reflects, working, running, striving and learning his craft even today. If he helps to develop a coronavirus vaccine, that would be a crowning achievement. After a fortifying hour with Dr Fauci, I realise that I would better let him go to get on with doing just that.