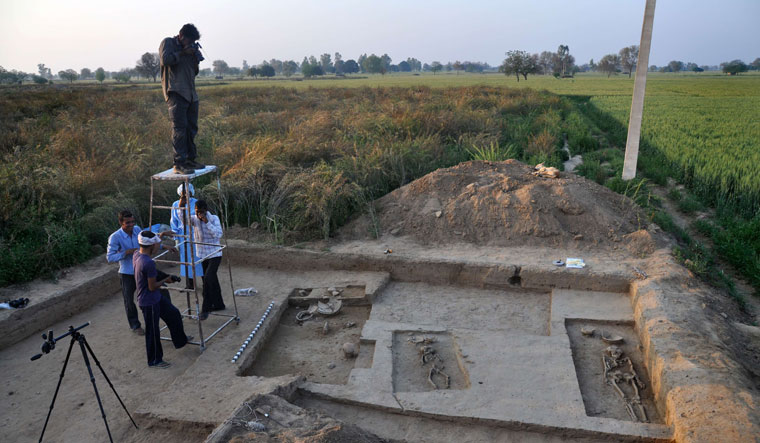 Recording the past: A photographer takes pictures of 4,500-year-old skeletons found in the historic town of Rakhigarhi, near Delhi | AFP

Egypt's arid climate has so impeccably preserved the mummies of pharaohs, that archaeologists have constructed ancient family trees based primarily on the extracted genetic material. Similarly, the freezing temperatures of Siberia, too, have preserved human and animal remains. In 1901, an expedition to the Beresovca river found a male mammoth—an elephant-like creature that became extinct more than 4,000 years ago—so well preserved, that it still had grass in its mouth.

With its harsh summers and lengthy monsoons, India's climate is not conducive to the preservation of human and animal remains; they either disintegrate or get heavily contaminated in the hot and humid conditions. Considering how challenging it is to study, or even find, ancient genetic material in India, a remarkable development took place in 2019. A group of four archaeologists and scientists succeeded in sequencing the genome of a woman who had died nearly 4,500 years ago—during the Harappan Civilisation—in the historic town of Rakhigarhi, around 150km from Delhi. The results of their collaborative effort were published in the September 2019 issues of Cell and Science.

In 2015, a team led by archaeologist Dr Vasant Shinde, vice-chancellor, Deccan College Post Graduate and Research Institute, Pune, had excavated a cluster of ancient skeletons from a graveyard in Rakhigarhi. The remains were sent to nearly 40 institutions in India and abroad for genetic studies. Dr Niraj Rai of Birbal Sahni Institute of Paleosciences, Lucknow, collaborated with Dr David Reich and post-doctoral fellow Vagheesh Narasimhan of David Reich Lab, Department of Genetics, Harvard Medical School, USA, to study the remains. They screened 61 skeletal samples and detected a tiny bit of DNA from a single sample (the woman’s remains). They succeeded in sequencing the DNA after more than 100 attempts.

In November 2019, in another significant development in genome sequencing, the Council of Scientific and Industrial Research (CSIR)—a pan-India network of scientists, laboratories, outreach centres and innovation complexes—announced that a group of scientists had, in a span of six months, successfully sequenced 1,008 whole genomes of present-day Indians. Minister of Science and Technology Dr Harsh Vardhan said the initiative—called the IndiGen Project—was a demonstration of “scalability within a fixed time span”.

Indian scientists first sequenced the whole genome of an Indian in 2010. Within a decade, they have demonstrated the ability to sequence them at great speed. Since the future of medical treatment is predictive diagnosis and precision medicine, where treatments are tailored for individuals based on their genetic make-up and response to drugs, quick genome sequencing is essential.

India's genetic pool is fascinating; it is a living record of multiple migrations over centuries, starting with the first migration out of Africa in the Stone Age, around 65,000 years ago. Later, men who came in battle or business, left behind traces of their blood, visible today in the shape of a nose, or manifesting as a rare genetic disorder. For example, in Karnataka, there is a population affected by Huntington's Disease, a degenerative disorder usually seen in Caucasians. Could soldiers of a Scottish regiment posted there during the British Raj have transferred these defective genes through local alliances?

While migratory waves of humans periodically injected genetic variety into local populations, Indians always preferred to marry within their own social groups. This inbreeding greatly reduced genetic variety among Indians; it is even lower than among Icelanders, one of the world’s most genetically isolated populations. “Even in large, urban populations like Chennai, humans are genetically so similar, that they resemble isolated populations,” said Professor Partha Pratim Majumder, founder of National Institute of Biomedical Genomics, Kalyani, West Bengal. Majumder was the driving force behind the GenomeAsia Pilot (GaSP) project, the largest genomic study among Asian populations; 1,739 individuals from 219 populations. GaSP was the pilot phase of the ongoing GenomeAsia 100K project—established in 2016 by Singapore’s Nanyang Technological University—which aims to eventually sequence the genomes of 1,00,000 Asians.

In 2005, the CSIR's Indian Genome Variation database (IGVdb) identified India as a land of “4,693 communities and thousands of endogamous groups.” If India were a pizza, the first layer would comprise the first African migration; subsequent layers would comprise following migrations. Within this melting dish, there are vertical hierarchies, or pizza toppings, which retain their distinctive flavours. These are the endogamous pockets, where certain genetic traits are magnified.

For instance, researchers found deadly quantities of the anaesthetic scoline among the Arya Vysya Chettiyars, an insular trading community in south India. The gene to metabolise scoline is missing in them, so they do not recover from anaesthesia. Since this defect is also found in Multanis and Germans, there is strong indication of gene flow through migration.

India is a storehouse of rare genetic diseases due to inbreeding. More than 70 million Indians are estimated to have them. “There are probably five to seven thousand rare diseases in India,” said Sridhar Sivasubbu, principal scientist, Institute of Genomics and Integrative Biology (IGIB), Delhi. “There are so many conditions that don't have a name or haven't yet been identified.” Sivasubbu recalled a case at the All India Institute of Medical Sciences, Delhi, where doctors were unable to diagnose the illness of a nine-month-old child, who had breathing problems and low muscle tone. They referred the child to the IGIB for genome analysis. The results showed that the child had a large deletion in a section of the genome, a condition that scientists at the IGIB never knew existed. Moreover, he had inherited the disorder from both parents, who were from east India. For a disease that hadn't yet been documented, the scientists were amazed to encounter two unrelated carriers.

The child did not survive. With the genomic information gathered, however, the IGIB developed a low-cost diagnosis kit through which the woman's next pregnancy was screened. Unfortunately, the foetus, too, carried the same defect, and the pregnancy was terminated. The couple were third time lucky, however, as tests conducted during the following pregnancy showed that the foetus did not carry the genetic defect. “Having lost our one-year-old to a rare disease, we were unsure of a proper diagnosis, forget about a cure,” said the woman. “Today, however, we are blessed with a healthy, active and playful child. This was only possible because scientists at the IGIB found the genetic mutation that caused the problem.” 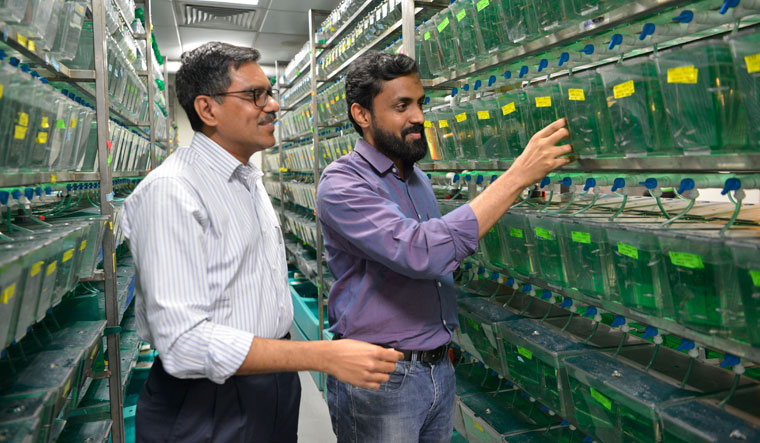 Whole genome analysis is being used as a tool for doctors and geneticists to go sleuthing into the world of mysterious diseases. Ten years ago, in Tirunelveli, Tamil Nadu, neurologist Radha Mahadevan was intrigued to see a patient with a peculiar manifestation of epilepsy. She remembered seeing a similar case as a student in Chennai. “We could not diagnose that patient’s disease, but I remembered he was from Tirunelveli, too,” said Mahadevan. Over the next few years, she saw similar cases and noticed that all the patients belonged to a particular community.

So, along with her husband, Dr Shantaraman Kalyanaraman, a pathologist, she went searching for the patient she had encountered as a student. They found him at St Antony's Church, Puliampatti, Tamil Nadu, which is frequented by worshippers praying for a miracle. The man was lonely and desperate. As they delved into his family history, they learned that cousins and uncles were similarly afflicted, and that the disease was prevalent in four generations of the community.

“We noticed that these patients would get anxious around bright lights or loud sounds, which were a trigger for the attacks,” said Kalyanaraman. “So they tended to avoid public spaces and had poor social lives.” The couple then contacted the IGIB's Genomics for Understanding Rare Diseases India Alliance Network, known as the GuaRDIAN programme, anchored by Sivasubbu and Dr Vinod Scaria. The two teams worked together for two years, collecting blood samples and undertaking whole genome sequencing. In 2018, the disease was identified as adult onset myoclonic epilepsy, a rare genetic disorder caused by a mutation on Chromosome 8, seen in very few populations globally.

Today, the Tirunelveli Medical College is treating 726 cases, the largest cohort of the condition in the world. “When we have a proper diagnosis, we can give the correct treatment,” said Mahadevan. “We also counsel families so that carriers can take informed decisions on marriage and pregnancy. There is a deep sense of satisfaction that we were able to accomplish this feat in a remote place.”

These serendipitous stories of genetic sleuthing, however, are a few bright spots in a dark genomic landscape that remains vastly unexplored. To look for needles in a haystack, one first needs a haystack. There is dire need for large-scale population studies to discover genetic variants unique to Indian communities. Such a catalogue would serve as the basis for developing diagnostic kits to detect a syndrome, and to understand the probability of acquiring a genetic disease. “Ninety-five per cent of whole genomes sequenced globally are of Caucasians,” said neuroscientist Vijaylakshmi Ravindranath, founder director, National Brain Research Centre (NBRC), Bengaluru. “We need our own reference genomes.”

The GaSP study had, in fact, found many genetic variants novel to Asian populations. For instance, a variant of a haemoglobin gene found exclusively in south Indians is responsible for beta thalassemia. It also found that the drug carbamazepine, used for treating mental disorders in the west, could actually have adverse effects on populations of Southeast Asia and Australia. Significantly, the study concluded that currently marketed DNA chips—used for discovering disease-causing genes—are ineffective for Asian populations as they are optimised on Caucasian genomes, and that chips designed for Asians would be more efficient and cost-effective.

Indian scientists are well aware of the urgency to catch up with the west in generating genetic data. The NBRC has spearheaded an ambitious multi-institute project that aims to create a genomic catalogue of 10,000 Indians from various communities. “There is so much we do not know,” said Ravindranath. “The incidence of cancer in the northeast is much higher than the national average. Is the cause genetic or environmental?” Generating genomic data is the easy part; the CSIR has demonstrated how quickly it can sequence genomes. The cost of sequencing, too, has come down from Rs70 lakh a decade ago to Rs1 lakh. Analysing the data—which is required to develop tools such as Indian DNA chips—is the real challenge, as there are 3.3 billion nucleotides per individual.

The IGIB is working towards a future where genomic testing is used for advanced disease diagnosis. It has created a prototype IndiGen card where genomic data is available to clinicians with a simple swipe of the card. Such data shows whether a person is a carrier of a particular genetic disorder and how he will respond to certain medication. The data, stored in a large repository, is constantly updated as new discoveries are made. “However healthy we may appear, each of us is a carrier of at least three genetic diseases,” said Sivasubbu. “Also, depending on our genetic makeup, there are variations in how each of us responds to a particular medication.”

Genome testing could soon become as common as an MRI. Of course, there are the larger issues of data protection and privacy that need to be considered, for which new legislation needs to be created. That, however, is governance, not science.