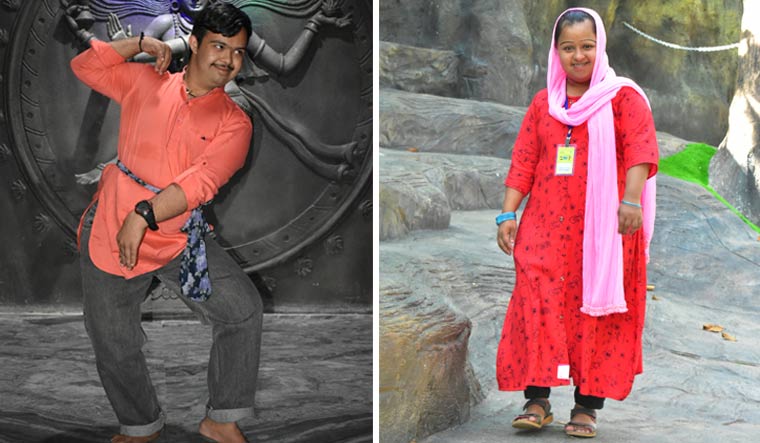 New life: Vishnu Amarnath (left) and Jasmine at the DAC.

Jasmine is the heroine and the singer in the film being shot. She does it with the ease of a professional. If you ask her her age, she would say she is six. But if you ask her father, he would tell you she is 25. People say she is mentally handicapped. But Jasmine prefers to be called an artiste, and she blushes when you call her a star.

Jasmine is one of the artistes at the Different Art Centre (DAC) at Magic Planet, a magic theme park in Thiruvananthapuram that attracts huge crowds every day. The park is run by magician Gopinath Muthukad's Magic Academy. "Jasmine was coughing in the morning and we wanted to take her to the doctor. But she refused and insisted on coming to Magic Academy," said Salim E., her father. "She is so happy here, and we are so happy seeing her smile."

Jasmine and 99 others are now part of the DAC, launched in November. Differently abled persons from all over Kerala are given special training here, as per their tastes and talents. There are sessions for dance and music, with an arts corner and musical instruments.

"All of them love to dance... and seeing them dance on stage without missing a step makes us forget the pressures of training them," said Divya, chief coordinator of DAC.

Take the example of Vishnu Amarnath, who suffers from Down syndrome. When he is on stage, you will only see a well-trained Bharatanatyam dancer, impeccable with mudras and adavus. He can do classical dances as well as jive to songs like Ed Sheeran's Shape Of You like a pro. "I have always loved dancing. Here, I get to perform on stage every day and that has boosted my confidence. When I hear people applaud, I feel like a star," said Vishnu after the performance.

Starstruck: Kerala Chief Minister Pinarayi Vijayan with students at the inauguration of the DAC | Manoj Chemancheri

All the kids may not dance like Vishnu but they are all equally eager to get on stage. It was something they never got an opportunity to do. "I did not know that my girl could dance before coming here," said Bindu, mother of Siby, 22. Tears had welled up in her eyes. "Even if I knew [she could dance], who would have given a stage to kids like ours?" she added.

One parent, Mini, said her daughter was more settled and peaceful since coming to DAC. Most parents would agree. Prameela, a native of Thrissur, has come all the way with her son, Yuvaraj, 15. "All the recognition that these kids get here has certainly changed them. The changes are so visible. Now I feel that all the difficulties in shifting to Thiruvananthapuram to put my son in the DAC is worth it," she said.

Akhil, who hails from Kasargod, the northern-most district of Kerala, has multiple disabilities, says his father Vijayan. But when he sings on stage, few would realise that. "He has become very confident after coming here. And this gives us hopes about his future," said Vijayan, who relocated to the state capital for his son.

But things did not sail as smoothly in the early stages of the organisation. Many of the students were aggressive and uneasy. Most of them had not seen much of the outside world. "I was once asked to leave a wedding as I had taken my autistic daughter along. These kids are [considered] a nuisance for others," said a mother who requested anonymity. After that, she rarely took her daughter to public events. The stories of others are similar. "To make them sociable and listen to us was the biggest task," said Divya. "The initial days were very tough. But now as the days passed, we can see their self-esteem grow every day."

As of now, there are 100 children enrolled in the DAC at Magic Academy. They do daily shows for the visitors. Some dance, some sing, some play instruments and some paint.

For most visitors, this is a novel experience. "I have never seen a differently abled kid perform. I never knew they were this talented," said Priya Sethunath, a teacher who visited on a school tour. Some were seeing differently abled people for the first time, and it served as an eye-opener for them. That was the motive behind opening the DAC, said Muthukad, one of the most sought-after magicians in south India. "We wanted to mainstream them; to tell the public that they also have a special space amid us," he said.

It was Muthukad's experience with 10 differently abled kids that he trained to become magicians that gave him the confidence to start this centre. "When those kids came to me a few years ago, they could not even make eye contact. They just stared at the floor. But once they started learning magic, they changed forever," he said with pride.

That first lot of kids—some autistic, some with Down syndrome—are part of the Mpower show at the academy now. "They have completed more than 1,000 stage performances and have not made a single mistake. You should see the confidence in their eyes," he added. Those children are about fly to the Middle East to do programmes there.

All parents vouch for the importance of mainstreaming special kids. Abdul Khadar whose son, Arafaz, is in the DAC, shared his tale. "My elder daughter is intellectually disabled as is my son. While she needs help for everything, my son has become more independent because of the exposure he received from places like this. All parents of special kids must bring them out of their shells," he said.

Muthukad had got doctors to assess the impact on the kids after training. The results of the evaluation carried out at the Kerala government's Child Development Centre were stunning. "We found out that there were significant changes in their personalities. They had become more confident and independent," said Dr Leena Sumaraj, who was on the team that carried out the study. Some kids, who were even reluctant to step out of their homes, now come to Magic Academy by taking the train on their own. "The changes that we observed in them were a revelation for even researchers like us," she added.

Muthukad attributes the success of the programme to the state government and to the Malayala Manorama group. "The support I got from the state government is enormous," said Muthukad, who is also a much sought-after motivational speaker. He said he became interested in the issues of special kids after attending a programme organised by Manorama. "I became a motivational speaker for the first time at ArdraKeralam, a programme organised by Manorama's daily for special kids," he said.

When THE WEEK caught up with Muthukad at the sprawling campus of Magic Academy, he was busy arranging a chartered bus and uniforms for the kids. "Most of the kids are from poor backgrounds and they spend a lot on travel. If we arrange a bus, that would be of great help to them," he said. Seeing Muthukad, the kids come running towards us. Some wanted to shake his hand and some even wanted to kiss him.

"Many of them have started offering us water and seats when we go to the mess," said Rehanas, a facilitator there. "Some have even started saying sorry when they realise they have made a mistake." All these are huge leaps for them. "The most important thing is to understand them. Once we understand them, they also start understanding us," said Divya.

Just then, Jijo, who is differently abled, walked up to us and enquired about Divya's three-year-old daughter, who often accompanies her. They had celebrated her birthday together a few days before. When Divya replied that she was in school, Jijo opened his bag with great difficulty and pulled out a packet of biscuits. "I brought this for her," he said, handing it over. Divya's eyes welled up. As did everybody else's.