Celebrities on what yoga means to them Bipasha Basu took to yoga aggressively around five years ago, after her marriage to Karan Singh Grover, who she describes as the modern version of a yogi. “He wakes up at sunrise, walks barefoot, stays connected to nature as much as possible and practises yoga with a determination and regularity that only a few can manage,” she says. The couple started attending yoga classes together twice a week. Of late, they are practising at home. “We are essentially into Ashtanga yoga, which is a more rigorous and demanding form of yoga focusing largely on one's breathing,” she says. “In between, problems of “severe acid reflux and knee issues” kept her from doing many asanas, including the Sirsasana and the Halasana—two of her favourites. “I did many things to contain the reflux, including homoeopathy and a change in diet,” she says. “And then when I came back to yoga, I realised how it helped the body gradually heal and bounce back. The deep breathing also helped my system become more alkaline.” For someone known for her high adrenaline freestyle workouts—her 30-minute videos on cardio workouts and aerobic dance have become very popular—yoga became a stabiliser. It helped her find balance and peace last year when she experienced “sudden and clinical numbness in the body”. “It was as if I was working out not just for the body, but also for the mind and the psyche,” she says. “It helped me find relief from stress.” 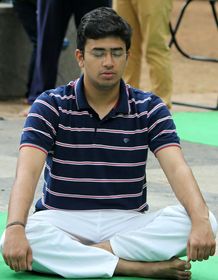 “In my life, yoga is as necessary as a meal,” says 28-year-old Tejasvi Surya, MP from Bengaluru South. He starts his day with a 20-minute session of Kapalbhati Pranayama. This is followed by Baddha Konasana, Dhanurasana and Virabhadrasana. They give him the much-needed stretch after a good seven-hour sleep. “I begin by chanting 'omkara' thrice and performing Suryanamaskara 12 times, for about 15 minutes,” he says. “I end the session with Shavasana—my favourite one-minute relaxation time that prepares me to face the day. It is like my cup of coffee in the morning.” Surya was introduced to yoga in school around 15 years ago. After that, his parents helped him stay on course. His mother is a yoga instructor. “Both my parents practise yoga every day without fail and strictly watch their diet. They do asanas better than me even at this age,” he says with a laugh. The lawyer-turned-politician practises under the guidance of Shri Parameshwar Guruji—a popular yoga teacher from his locality. 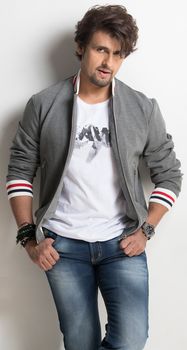 Around 15 years ago, Sonu Nigam was so addicted to yoga that it became imperative for him to take a break from it. “Initially I would practise it for 30 to 45 minutes, but I soon reached a point where I would enjoy it so much that I would spend five to six hours every morning just doing yoga,” he says. But that was not the problem. He admits that Ashtanga yoga made him feel “happier than ever”. But he also sensed the complete surrender to the deeper, emotional self. “I was very young at the time and the intense one and a half years I gave to yoga, during which I also extensively read about it, brought me so close to it that I began to feel as if I had risen above materialism itself,” he says. “I had reached a level where I could actually have an affect on people. Once, I was discussing yoga with a group of people at home and soon, a British girl who was working with me was in tears.” At the time, the feeling was both stimulating and unsettling in equal measure. Today, the playback singer practises on his own at his home gym by mixing different kinds of workout—stretching, yoga, weight training and cardio. “But there is nothing quite like yoga,” he says. “Even today, I believe I can touch people's soul. My attitude to life has changed with regular practice and I have evolved as a person.” 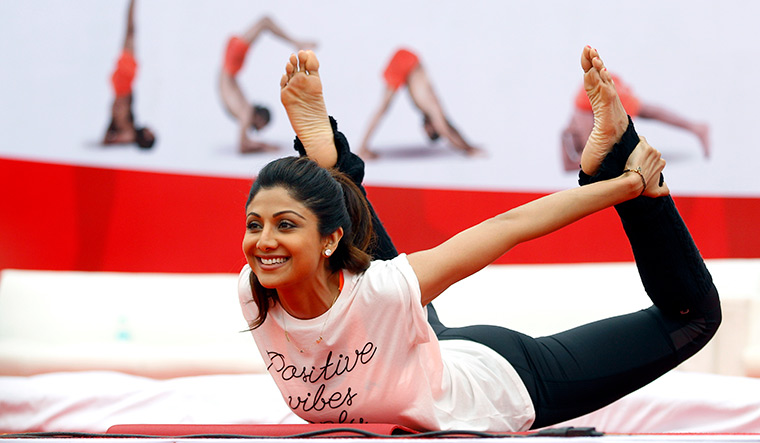 At the launch of her yoga app ahead of International Yoga Day, pictures of Shilpa Shetty Kundra doing yoga went viral. They attracted a lot of comments on social media from fans who applauded her commitment to the activity. Her YouTube videos on 'Yoga for Beginners', in which she deconstructs complex asanas, have got hundreds of subscribers. “To me, yoga is discipline,” says the 44-year-old actor, who has been practising it for over 10 years now. She has been trying to pass on her love of yoga to husband Raj Kundra. “He has started taking it seriously now,” she says. “He has lost eight kilos and needs to lose more. He is still at the beginner's level while I have reached an advanced stage. So we can't really do it together.” There are, however, still a few asanas like Mayurasana and Vrischikasana that she struggles with. “Practice is the key,” she says. “Sometime back, I had a severe neck injury and found it difficult to practise my asanas. But now, I think I have overcome it. It has to do with the power of my mind and not my body. Your mind negotiates with your body and pushes you to test your limits.” 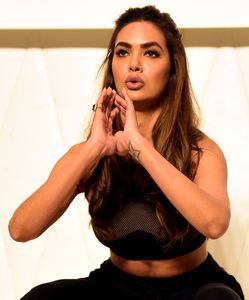 Esha Gupta was inspired by her parents to do yoga, especially her father, who is a retired army officer. “My family have taken to [yoga] in a serious way,” she says. “Over the years, my body has got accustomed to practising yoga and meditation at least twice a week.” Gupta practises Iyengar yoga, which uses props to do various asanas. “I have always been hyper-flexible or double-jointed, so the chances of me getting injured are high,” she says. “Two years ago I got a bad shoulder injury but Tittibhasana helped in easing the pain.” Other than yoga, she incorporates different workouts during the week, including dance, cardio, kickboxing and weight-training. “If I don't mix them, it gets very monotonous and boring,” she says.