The alchemy of agar

Agarwood, India’s natural treasure, has been an age-old healer 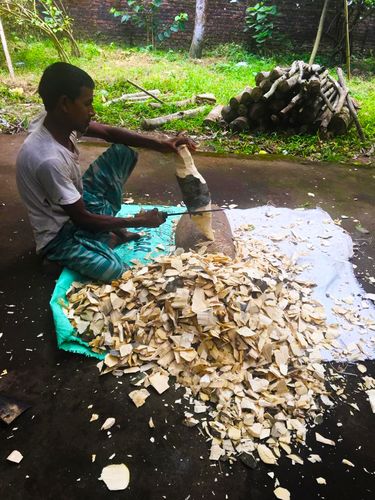 Among India’s many natural treasures is one of the oldest-known—agar. Known as ‘gaharu’ in Southeast Asia and ‘oud’ to the Arabs, this mysterious wood has for long been one of the most sought-after fragrant materials.

Right from Vedic times, mystics have used agar in spiritual rituals. It finds place in several classical Indian texts for its magnificent fragrance and healing properties.

While oud is synonymous with the Gulf states and the Arabs' fierce passion for its scent, India has been the pioneer in agarwood usage, dating back several millennia. Senior perfumer Krishan Mohan Singh says that while the west is only now waking up to agar’s secrets, India was the first to discover its healing properties. “Agar finds prominence in the ancient Indian ashtagandha or treasure house of eight natural fragrant materials,” he says. “There is an underlying mysticism about the deep, earthy, green, leathery and woody aroma of oud, which is considered both physically and mentally healing.”

In the forests of Assam and in other Southeast Asian countries like Thailand, Cambodia, Malaysia and Sri Lanka, the bark of the aquilaria agallocha tree, when infected by a type of mould, produces a resinous aromatic hardwood. While all of this bark is procured, some of it is distilled to extract agarwood oil. Naturally aged agarwood has a superior fragrance.

Both the wood and oil have exceptional healing properties. While the wood is burnt as incense, the oil has been used in ancient medicine and perfumery. 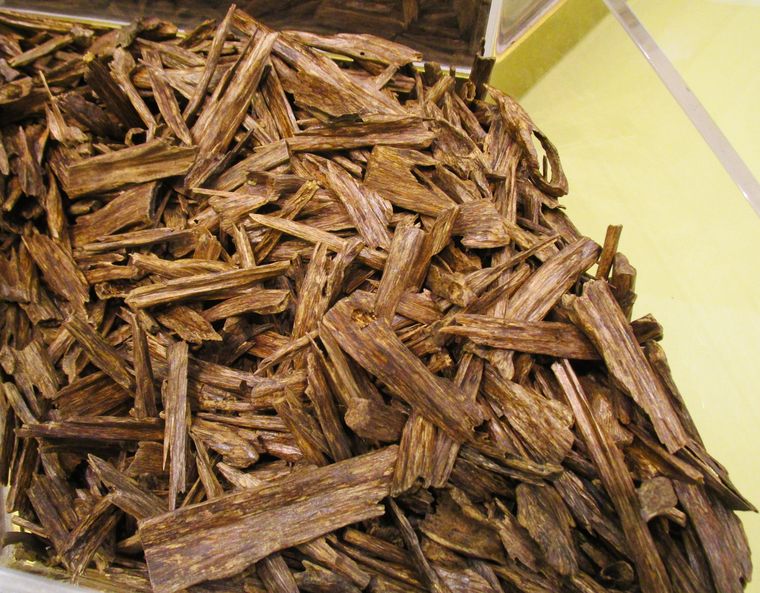 Scent plays a vital role in human sexuality. Pheromone perfumes find prominence in upmarket western fragrance lines for their ability to attract the opposite sex. But ancient sciences discovered the aphrodisiacal properties of agar centuries ago. The earthiness and warmth of agarwood’s highly potent fragrance is known to improve sexual energy.

Apart from Chinese medicine, Unani has also advocated the use of agarwood oil to improve overall health and boost sexual stamina. “Agarwood oil has been an integral part of Unani formulations. Tried and tested remedies like ‘Qurs Kushta Tila Kalan’ and ‘Lahmina’ tonics that boost sexual vigour have a portion of it,” says Tajul Islam Bakshi of Assam Aromas, one of India’s foremost agarwood distillers and exporters. He says that although the skyrocketing cost of agarwood oil has limited its use in Unani medicine, there are still some hakims in Delhi who use it.

It is believed that burning agarwood chips over charcoal during sex can improve performance. “Oud being aphrodisiacal is subjective,” says Singh. “Auto-suggestions and placebos can work on the human psyche. I have even heard of some bizarre cases when people mixed a tiny drop of oud oil with their paan to improve sexual performance! It’s like a doctor I know who would make his male patients virile with his ‘secret magic remedy’—nothing but a simple B-complex injection!” 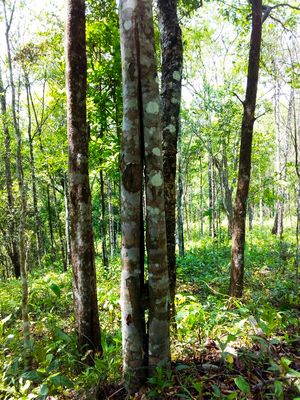 Agar is valued as a cure for multiple disorders. According to ayurveda physician Dr Shaik Nissar of the Arya Vaidya Sala in Kottakkal, agar can be used in many ways. For cough, hiccoughs and dyspnea for example, agar churna (powder) should be consumed with honey.

For diabetes, the legendary sage Sushruta recommended a decoction of the plant cyclea peltata and agar. Oedema (fluid retention in the tissues) can be cured by applying a paste of the plant angelica glauca and agar.

According to Tajul Bakshi, the hydrosol (water derived during distillation) of agar is an antacid known to fight gastric diseases. A paste derived from the CO2 extraction of this agarwood waste, which contains 30 per cent agarwood oil, is known for its skin-nourishing properties.

Agarwood tea, from the leaves of the aquilaria agallocha tree, is a growing craze in regions including Southeast Asia. Rich in antioxidants and nutrients like zinc, sodium and calcium, it reduces insomnia and stabilises blood sugar levels in diabetics, besides curing gout. 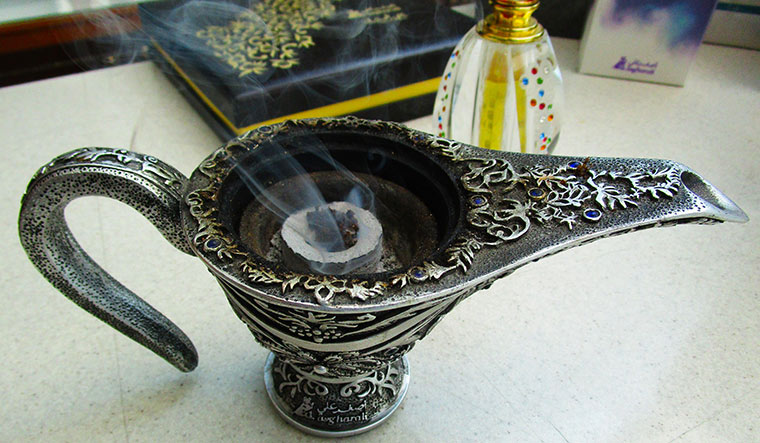 Research by the International Islamic University in Malaysia found the potential anti-cancer properties of agarwood essential oil. In 2016, a study published in the journal BMC Complementary and Alternative Medicine talked about the potential use of agarwood oil against tumours in the colorectal region. Research from the Universiti Sains Malaysia studied the latent safety of agarwood essential oil. They mentioned in their study that aquilaria crassna (a category of agarwood trees) was a rich source of sphenoids, flavonoids, benzophenones, xanthones and sesquiterpenes. It was also concluded that agarwood oil is non-toxic, even in large doses.

In vivo studies on the anti-tumour effects of agarwood oil reported that it could hamper the growth of HCT 116 colorectal carcinoma cells. The research also highlighted the use of this essential oil in the treatment and prevention of colorectal cancer. 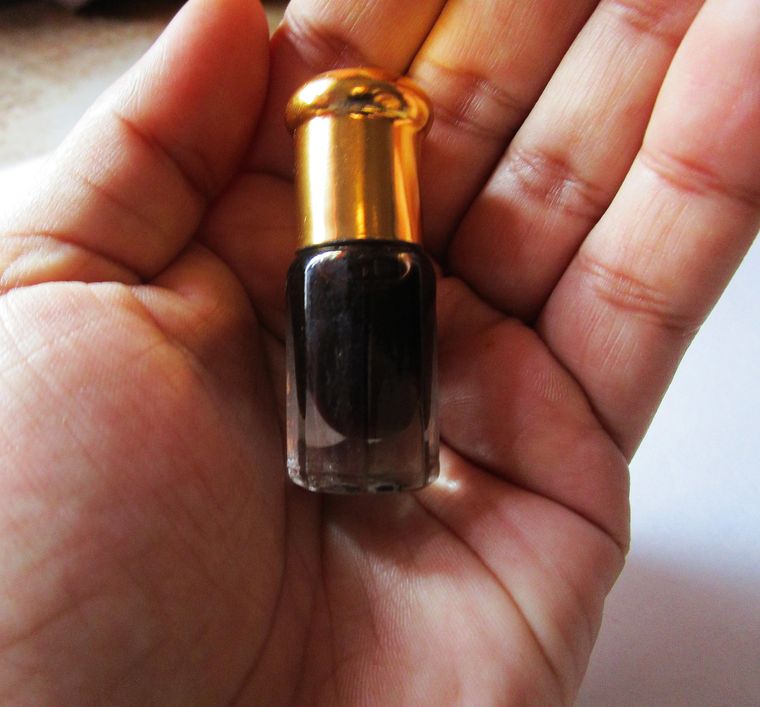 “Oud is sacred to all faiths because of its spiritually elevating aroma. While it is ‘Sunnah’ (tradition) in Islam, even many Christians buy my oud for meditation,” says Bakshi, adding that both agarwood smoke and the oil are among the greatest natural anti-depressants. He says that while the Arabs crave for oud as perfume, the west buys it for spiritual practices.

Oud has been used in Zoroastrian ritual, Vedic liturgy and Buddhist practice. India’s sages have called it the ‘scent of nirvana’ for its deeply healing aroma, which bring calmness and clarity, and releases pent up stress and negativity.

On the flip side

Many researchers point to the health hazards caused by the excessive use of agarwood. A study in Taiwan concluded that the children whose parents burnt agarwood were 36 per cent more likely to have chronic asthma and 64 per cent were more susceptible to breathing difficulties during exercise.

Another study released in 2013 suggested that burning oud incense could cause air pollution indoors and, hence, lung inflammation.

Many oud merchants have been known to cheat their clients by adding lead to the agarwood to increase its density, which, when burnt, can have devastating effects on health.

Agarwood oil is usually well tolerated when used as essential oil for the aroma or when applied externally.

If inhaled excessively, it may cause nausea and temporary dizziness for a few minutes. If so, drink water, breathe fresh air and lie down for a few moments.

If applied on the skin excessively, it may cause local redness, irritation or increased warmth. Wash it off with a thin stream of cold water for three to five minutes.

Upon excessive oral intake, it may cause nausea, vomiting or heartburn. Having a few pieces of cucumber or taking ten raisins soaked in water can help.