Inside the world and work of anaesthetists 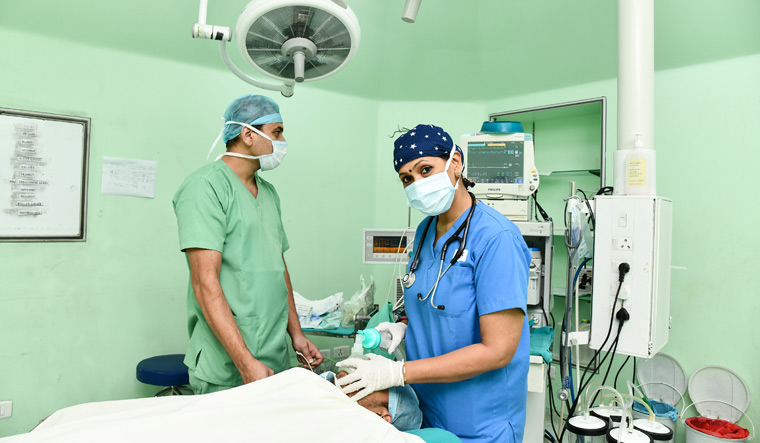 Every time I visit a dental clinic, I say a little prayer of gratitude for Dr Karl Koller, the man who discovered local anaesthesia.

Koller, an Austrian ophthalmologist and a colleague of Sigmund Freud, experimented with cocaine as a local anaesthetic for eye surgeries. He had earlier tried using morphine, bromide and chloral hydrate for local anaesthesia in laboratory animals, but failed.

Koller repeated the tests on a rabbit and a dog, too, and the results seemed promising. He found that cocaine had pain-killing as well as tissue-numbing properties. Thereafter, cocaine was used as a local anaesthetic in different types of surgery. Cocaine, however, is no longer used as an anaesthetic, as it can damage the cornea and can be addictive. Today, there are a variety of anaesthetics that are being used in surgeries and procedures, which can be administered through inhaled gas, injected via shots or intravenously, applied topically in liquid form or as a patch or through spray. And, in the right hands, they put patients at ease, numbing their pain, and let surgeons and specialists work in peace. 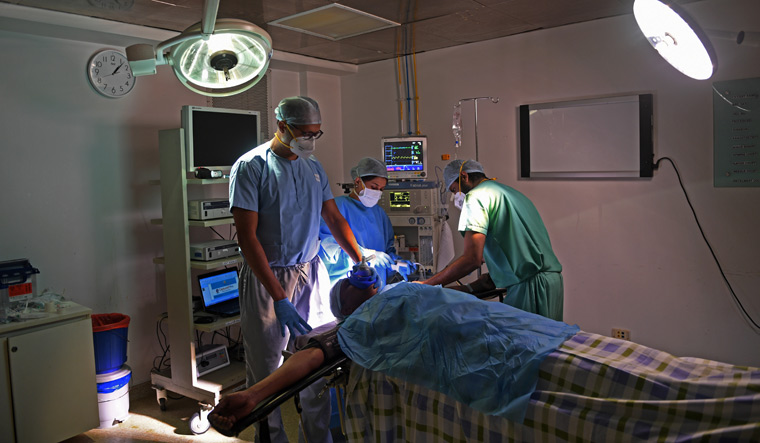 But those hands are rarely noticed, despite the fact that it requires high precision skill to administer anaesthetics. Anaesthesiology is among the most high pressure specialties in medicine, says Dr Sreeja Menon, associate director and head of department of anaesthesia at Max Hospital, Gurugram. “All our drugs act on various organ systems and need to be fine-tuned according to the patient and surgery for optimal results or can end up creating a disaster,” she says. “High-level skills are needed for an ideal outcome. A patient’s life is practically in the hands of the anaesthesiologist during a surgery. Even after 22 years, I must be very alert on the job, with no room for error.”

There are different types of anaesthesia, including local anaesthesia to numb a small section of the body (generally used during cataract surgeries or dental procedures); regional anaesthesia to block pain from a larger section, say, a limb or below the hip (for example, epidural during a caesarean); and general anaesthesia to put the patient in a sleep-like/unconscious state (used during invasive surgeries). People usually associate anaesthesiologists or anaesthetists with operation theatres. Their job, however, begins way before the surgery and at times continues even after the patient leaves the operation theatre.

An anaesthesiologist’s job starts when the surgeon sends a patient for surgery. He or she meets the patient and does a pre-anaesthetic check, which involves getting to know the patient in detail. “We try to understand whether the patient had any surgeries or anaesthesia issues in the past,” explains Muralidhar Thondebhavi S., consultant, anaesthesiology and pain medicine, Apollo Spectra Hospital, Koramangala, Bengaluru. Anaesthesiologists also take a look at the patient’s medical history, the medicines being taken and allergies, if any. They also check if any family member reacted badly to anaesthesia in the past. “Following this, we do a physical examination of the patient, which includes an examination of the mouth and oral cavity,” says Thondebhavi. “After that, we tell the patient what type of anaesthesia is given and what to expect after the surgery. This patient interview generally ends with obtaining an informed consent.” 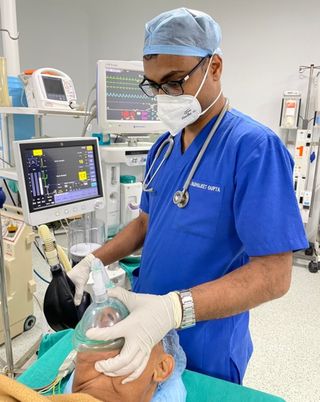 On the day of the surgery, the anaesthesiologist reviews the patient again. “We also need to prepare the operation theatre,” says Thondebhavi. “We check the anaesthesia machine every day for its proper functioning. We have to load all the drugs that are to be administered to the patient. We use a lot of checklists, very similar to how pilots use checklists while flying. The WHO surgery safety checklist is another valuable tool, which is used just before anaesthesia is given. We have checklists for checking the machine as well. The use of checklists enhances safety.”

But not many are aware of the work that anaesthetists do, and several myths abound. One of the common myths people have is that anaesthesiologists are technicians. This is far from the truth. Anaesthesiologists are qualified doctors. They must finish the four and a half years of medical school (MBBS), followed by three years of specialisation. Next, they must pass the university or national board exam to become a certified specialist anaesthesiologist, says Dr Yash Javeri, critical care, anaesthesia and emergency medicine, Regency Superspecialty Hospital, Lucknow. After passing the exam, one can pursue a super specialisation in a field of his/her choice­—cardiac anaesthesia, paediatric anaesthesia, neuro-anaesthesia, intensive care, chronic pain management and emergency medicine.

Menon, for instance, did her MD in anaesthesia from a government hospital. “It was for three years and involved postings in all branches of surgery like gynaecology, orthopaedics, neurosurgery, cardiac surgery, ENT and ICU,” she says. “I had to take an exam at the end of three years, both practical and written, and submit a thesis before being declared an MD in anaesthesia. I did a senior residency in AIIMS, Delhi, for another three years post MD.” Menon did her super specialisation in chronic pain management and started her practice as a consultant before working her way up to becoming the head of the department. The foundation of anaesthesiologists is formed by studying physiology, pharmacology, anatomy and physics, says Thondebhavi. “Physiology is the study of how the body functions. As anaesthesiologists, we see the complete spectrum of how the body works in health and disease,” he explains. “We need to know how gases, machines and electricity work. The drugs that we use are some of the most powerful ones. So an anaesthesiologist should have indepth knowledge in pharmacology and how anaesthetic drugs and gases work. Besides these, we need to know about all other specialities and associated comorbidities.”

There are many myths about regional anaesthesia, too. “People don’t consider [regional anaesthesia] to be anaesthesia because they remain aware of the surroundings, though not about the surgery,” says Dr Madhujeet Gupta, senior consultant, anaesthesia, PSRI Hospital, New Delhi. Another myth is that anaesthesiologists leave the OT after administering anaesthesia. In fact, anaesthesiologists play a key role from the start of the surgery till the patient is shifted either to the recovery room, adjacent to the operation theatre, or an ICU. They are experts in dealing with post-operative pain and they ensure patients are as comfortable as possible.

“Our main area of work lies in the operation theatres, conducting safe anaesthesia for all the surgeries being done,” says Gupta. “We have to ensure that the patient’s pain is well managed before and after the surgeries. Many patients are required to be kept on elective ventilator support and intensive care after critical surgeries. Such patients are kept under the constant monitoring and care of an anaesthetist till they recover.”

There is a constant challenge till the surgery is over, especially in case of complicated surgeries. “Many unforeseen complications or events happen during the course of anaesthesia,” says Gupta. “Failing to address the situation at the right time could have grave consequences. So, vigilance and preparedness is the key to the successful conduct of anaesthesia.”

Anaesthesia is calculated based on body weight, the age of the patient, the specific illness the patient has and the type of surgery he or she is undergoing. A drug error occurs when there is gross miscalculation or because of an ailment, like a weak heart, that the anaesthesiologist was not made aware of prior to the surgery. Unexpected allergic drug reaction can falsely be attributed as errors.

Thondebhavi recalls a drug error that he made in the early days of his training. That incident turned him into a “safety-obsessed” anaesthetist. “We were operating on a child for a birth defect in the urinary bladder,” he recalls. “At the end of a procedure under general anaesthesia, we normally give a cocktail of drugs for the reversal. It reverses the chemically-induced muscle paralysis. That day, I picked up the wrong syringe. I injected the medicine that causes the paralysis.” Instead of waking up instantly, the child was unconscious for another 30 minutes. “It didn’t cause any harm,” says Thondebhavi. “But it made me realise the drugs loaded into the syringes should be labelled and read accurately.”

An anaesthesiologist’s role is not restricted to the OT only. Anaesthesiologists dealing in critical care have to take care of sick patients in collaboration with other specialists looking after different aspects of the patient’s wellbeing. Many believe that pain after the surgery improves immunity. However, the truth is that pain increases the stress response in the body and can weaken it.

Another popular misconception about spinal anaesthesia is that it causes back pain. Women who have undergone C-section may complain of back pain. Thondebhavi attributes it to poor posture among other reasons. Women do not get back to their normal posture after the C-section and they often blame the back pain on anaesthesia. “We use a fine needle and it generally doesn’t cause any trauma,” says Thondebhavi, who is a member of the national executive committee of the Academy of Regional Anaesthesia of India. 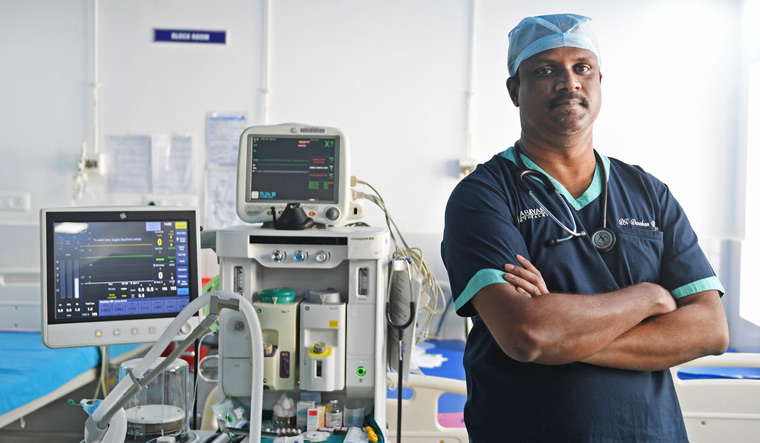 The myths and misconceptions could be because anaesthesiologists come in contact with patients only briefly during their hospital stay. As doctors working in the background, their patient contact is minimal. Patients don’t recognise the vital role anaesthetists play, and their hard work often goes unnoticed and unacknowledged. Even during the pandemic, the largest group of frontline medical specialists were anaesthesiologists in different roles, says Javeri. Many of them worked for 24 hours or more without a break in the last one and a half years. “It could have been a lot more encouraging if the patients directly appreciate the pains we take to keep their sufferings at bay,” says Gupta.

Being an anaesthesiologist can take a toll on one’s health as well. Anaesthesiologists, in general, lack control over their working hours. Some work with different hospitals as freelance anaesthesiologists. Erratic schedules lead to a poor work-life balance. Unlike other doctors, anaesthesiologists can hardly step out of the hospital. Spending long hours in artificial light can be detrimental to one’s physical and mental health. Night shifts are an inevitable part of their lives. A typical day in an anaesthesiologist’s life is filled with hours of boredom and moments of terror. “We do have occasions where decisions have to be made in a split second,” says Thondebhavi, who has brilliantly captured the life of an anaesthetist in his book Think Like An Anaesthetist. “When patients entrust their life with us, that itself is a demanding position to be in.”

For Menon, juggling the responsibilities at home and work has never been easy. Between managing a home, two children, family and a full day at work, life has been hectic, she says. Her workday begins at 8am and on a lucky day ends at 5pm, but there are days that stretch into nights and she gets free only by 11pm. “Pressures of the job begin right from the days of training or residency,” she says. “Long duty hours, busy sleepless emergency nights, ICU duties and academics during training keep us on our toes.”

Dr Darshan V. Pawar, consultant anaesthesiologist at Narayana Nethralaya in Bengaluru, will agree. For him, a typical workday begins the previous day itself. By late evening, he receives the list of patients scheduled for surgery the next day. This is followed by segregating the patients into different categories, depending on the severity of their medical condition and their general health. These preparations help the team prioritise high-risk patients with multiple health problems and comorbidities and tackle unforeseen eventualities, adverse effects or complications during the surgery.

Family is his anchor, says Pawar. He loves to play table tennis with his son and helps his wife with household chores. “Watching movies is my greatest stress buster,” he says. “I like old Kannada movies. They are so entertaining.” Occasionally, he catches up with friends and colleagues over coffee. On Sundays, he goes cycling.

From Monday, as always, duty calls and he readily answers.