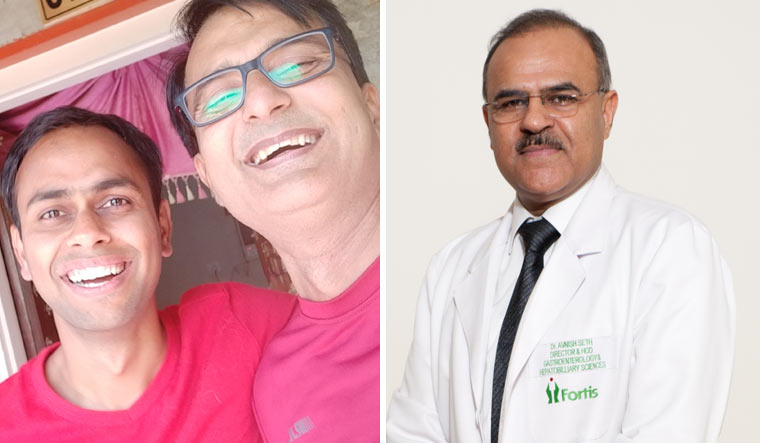 Novel treatment: Dr Avnish Seth says he performed the first stool transplant for ulcerative colitis in India in 2014 on Manas Shukla (with spectacles). His brother-in-law (far left) is the donor.

Poop is the future. It may arouse disgust, but poop transplants are being considered a curative wonder, beginning with ulcerative colitis, for which the treatment has shown positive results.

“We have it in plenty. Indians are the second highest poopers in the world, producing about 400g per person per day,” says Dr Avnish Seth, director, gastroenterology and hepatobiliary sciences, Fortis Healthcare, who says he performed the first stool transplant for ulcerative colitis in India in 2014. Since then, Seth says he has done the procedure with 50 other patients, and is conducting a clinical trial for stool transplant with patients with irritable bowel syndrome.

The procedure itself is not too complicated, and involves transferring the stool—the richest source of gut microbiome—from a healthy person to the colon of a patient to restructure the gut environment. Stool samples are taken from a donor with a healthy gut environment, which houses a rich, diverse microbial composition.

The stool is then churned in the mixer with saline water, run through a soup strainer and transferred to the diseased patient through a colonoscopy. “The best part is that except the colonoscopy, the rest of the stuff can be done at home,” says Seth, admitting that the “yuck” factor might be a put-off for the patients initially. “But once they understand the procedure and experience the benefits, it can be life-altering for some of them.”

Agrees Manas Shukla, 50, the first patient to get the treatment. “The ulcers in my colon meant that I would bleed each time I went to relieve myself, which was so often. The bleeding would happen otherwise as well. I was fatigued, could not travel for work, and had lost a lot of weight, too,” recalls Shukla.

The Delhi-based businessman concedes that preparing the solution for transplant can be a challenge, but nothing that “cannot be overcome”. “The maximum time that the solution can stay is six hours, within which the solution has to be transferred to the patient through a colonoscopy,” he says.

The real challenge though is finding a healthy donor, and then matching the microbial requirements of the donor and the recipient—the microbial composition has to fit like a jigsaw puzzle. “For one, we need to carefully evaluate that the bacteria that are causing the ailment in a patient are not in excess in the [microbiome] of the donor,” says Dr Sharat Varma, senior consultant, paediatric hepatology, liver transplant and gastroenterology, Max Super Specialty Hospital, Saket.

In 2018, Varma conducted a first of its kind stool transplant in Asia for a six-year-old boy from Odisha who had a gut disorder (short bowel with recurrent D-lactic acidosis). The disorder was caused because of an excess of the bacteria Lactobacillus, which was producing a toxin that made the boy sick. He had frequent stools, hampered growth, would slip into a “coma like situation” and was extremely dependant on antibiotics to control the bacterial proliferation.

“In his case, we considered his parents for donating stool. Before a donor is selected, we have to evaluate their gut microbiome. In this case, we had to be careful that the Lactobacilli population was not too high [in the donor's microbiome] or it would have defeated the purpose of the transplant,” he says. Overall, doctors will evaluate the entire microbial composition so that the delicate balance of microorganisms in the gut is restored, and no disease-causing bacteria are transferred. A “star donor”, says Seth, will have all these qualities.

The transplant may be simple and inexpensive, but the “match-making” is an expensive exercise, says Varma, with each genome sequencing test for gut microbiome costing Rs15,000 to Rs25,000. Besides, as Seth points out, at times, not one donor is good enough—a mix of two or three donors may also be required to build the right, effective solution.

And then, there is the efficacy of the procedure. Seth says in his trials, about 60 per cent patients have seen positive results, with no side-effects. Good bacteria, of course, do not last forever and the transplant procedure has to be repeated, too. “Besides the transplant, they have to have their medications as well. But, in the case of ulcerative colitis, for instance, they can be taken off the heavier medication such as steroids, which have a lot of side-effects,” says Seth.

Shukla, however, is only on one anti-inflammatory drug; he needs to undergo a transplant every six months. “From having heavy steroids and having tried every kind of treatment, to now just one drug, things have improved drastically for me. I have been lucky,” he says.

Shukla has been lucky on another count, too. Having an extremely cooperative donor in his brother-in-law. “For the last two years, he has been living in New Zealand. Every six months, he comes down for the donation. And now, I prepare the solution myself. It just takes half an hour,” he says. “There is no need to get disgusted. You don’t have to have it orally; it is put in your colon.”