As adolescent obesity is rising, importance of a healthy lifestyle holds the key 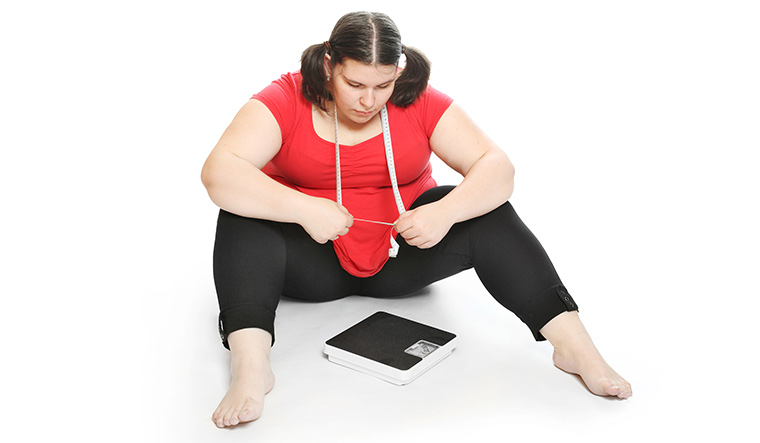 Mornings at Dr Sudhir Kalhan's are always busy. New and old patients walk in and out of his chambers. Inside, the walls are plastered with several before-and-after photos of young men and women, reminiscent of newspaper ads for weight-loss clinics. Some faces have been blurred, but the bodies reveal a telling story of their transformation.

But there is no photo of Shaheen (name changed on request); she is “special”, says Kalhan, co-chairman, Minimal Access and Obesity Surgery Clinic at Delhi’s Sir Ganga Ram Hospital. It has been five years since her weight-loss surgery, but Shaheen, who divides her time between Srinagar and Delhi, drops in “every once in a while” for a review. “She is just like my daughter, so don’t put her name, please. I don’t want her surgery status to have a bearing on her future. She is doing so well now. Isn’t she pretty?” asks Kalhan, even as Shaheen, 22, insists that she is fine with revealing her identity.

Five years ago though, things weren’t looking that “pretty” for the management graduate. Shaheen weighed 135kg, and had a BMI of 48kg/m2. Typical to those in her stage of obesity, Shaheen had stopped going to school, wouldn’t talk much, and had her parents worried about her future.

“Most parents turn up for help when they start thinking about the kids’ marital prospects,” says Kalhan, without naming Shaheen’s case. They come when the kids are suffering from mental health issues, co-morbid conditions such as diabetes, sleep disorders, difficulty in breathing, walking, and in extreme cases, when the teenager is on a ventilator, he says.

Take the case of Delhi-based Mihir Jain, who had a surgery last year at the age of 14. When Mihir, who weighed more than 200kg before his surgery, had to step out of his house to travel to hospital, it struck him that he could not make the ride without a machine to support his breathing.

Shaheen’s case was not that bad. Though her BMI was above the safe limit, she barely had any co-morbid conditions, except her pre-diabetic status, recalls Kalhan. 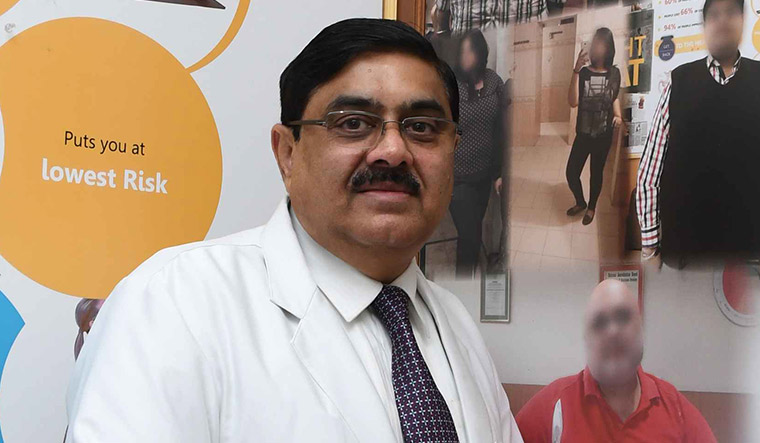 Shaheen and Mihir are not alone in their condition. India has 75 million obese people, of which 50 million are morbidly obese, with a BMI higher than the 37.5 limit. When it comes to adolescents, estimates suggest that 10 per cent of adolescents are overweight and around 5 per cent obese. Adolescent obesity in India has increased from 16.3 per cent in 2001 to 19.3 per cent in 2010.

“When it comes to adult obesity, India comes third after the US and China. But when it comes to adolescents, we are ahead of China, too,” says Dr Arun Prasad, chief of Bariatric and Metabolic Surgery Centre, Manipal Hospitals, Dwarka. The obese child is highly likely to develop into a morbidly obese adult, say doctors.

School-based studies from Chandigarh to Chennai suggest that 10 to 25 per cent of kids are overweight, and need to alter their lifestyle to avoid diabetes and other diseases in adulthood. For instance, a study done by Postgraduate Institute of Medical Education & Research (PGIMER), Chandigarh, on 9,000 school-going children in 2014 found that 15 per cent of them were overweight and obese, and 50 per cent had low HDL (good cholesterol) levels, an early marker of metabolic syndrome (increased blood pressure, high blood sugar, excess body fat around the waist and abnormal cholesterol or triglyceride levels), says Dr Anil Bhansali, head of department, endocrinology, PGIMER Chandigarh.

According to a 2018 study in The Lancet, in the next decade, the number of diabetics in India would have touched 98 million. Around 10 per cent of all new diabetics, says Kalhan, are obese children. Another study published in The Lancet (February 2019) also suggests that in the US, the obesity epidemic might be blamed for the rising number of certain kinds of cancers in adults aged 25 to 49 years. These cancers include colorectal, corpus uteri, gallbladder, kidney, pancreatic and multiple myeloma. 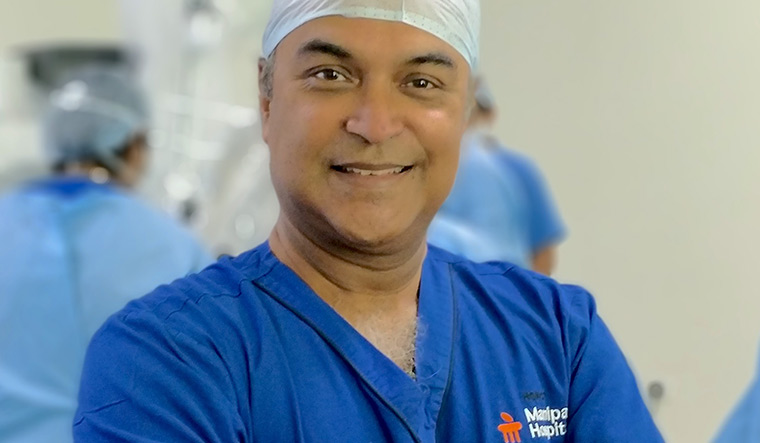 In India though, awareness around adolescent obesity, its risk factors and the option of surgery is still low. “Of every 1,000 surgeries, only 2 or 3 would involve adolescents. The numbers may seem small, but it only points out that a large number of children need help but are unable to reach out because of social stigma,” says Prasad, also president of the Obesity and Metabolic Surgery Society of India.

To be considered for surgery, doctors say the cut-off for kids would be a BMI of 32.5 with co-morbid conditions and above 37.5 without co-morbidities. Even within these parameters, not everyone would be taken in for surgery. “First, we counsel them. A majority can be treated through medical management, that is change in diet, lifestyle and hormonal therapies,” says Kalhan. “We also assess their goals—they have to be realistic; this is not for aesthetic purposes—and their motivation levels before deciding on surgery. For every 100 patients, I would take only ten for surgery.”

Most bariatric surgeons concur that surgery is advised when all else fails and a life is at stake. As in adults, for morbidly obese kids, too, two surgical options are considered—a Roux-en-Y Gastric Bypass or a sleeve gastrectomy. In the first, the surgeon separates the upper portion of the stomach from the lower, and then connects the upper portion to a limb of the small intestine. The new stomach pouch is smaller, and restricts the amount of food one eats. The digestive system is rerouted to bypass the larger part of the stomach and part of the small intestine, leading to less absorption of nutrients. “Until five years ago, this used to be the gold standard in weight-loss surgery. But because of the issue of malabsorption of nutrients, it is no longer the preferred one,” says Dr Atul Peters, Apollo hospital.

In sleeve gastrectomy, the more preferred option that obviates the issue of nutritional deficiencies, the surgeon cuts much of the stomach to create a small pouch, which is then stapled together with a “gun-like machine”. “It is like we make the stomach from XL to XS. You eat less, and feel full quickly,” says Kalhan.

In a first-of-its-kind study to evaluate the effects of sleeve gastrectomy on morbidly obese adolescents in the Indian subcontinent, doctors at the All India Institute of Medical Sciences found promising results, says Dr Sandeep Aggarwal, professor, bariatric surgery, AIIMS. The children lost 54.5 per cent of their weight in the first year (over 50 per cent means the surgery is successful). Though they regained the weight in the next one year, two participants that were followed up reported sustained weight loss after that. Four of the ten kids had diabetes, and three of them were cured of it after surgery, according to the study published in the January-March issue of the Journal of Minimal Access Surgery. However, further studies are needed to evaluate the efficacy and safety of the surgery on adolescents, it says.

For Shaheen though, the surgery has proved effective until now. She lost 10kg in the first month, and in the next six months, she was 30kg lighter. This January, she weighed 75kg, and her BMI stood at 32 kg/m2, not too far from the ideal of 24 in her case. “You feel confident and better about yourself. Other than that, the only change is that earlier I used to eat one large meal in the day, and then have a heavy dinner. Now, I eat smaller meals through the day,” she says.

Those who undergo surgery also need to take supplements. Kalhan advises one multivitamin tablet and protein supplements for about six months to compensate for any nutritional deficiencies.

The procedure has risks, too—bleeding, leak and deep vein thrombosis. Peters though says that the risk is limited to less than 1 per cent of patients.

Kalhan says that the surgery carries as much risk as an appendectomy or a gallbladder surgery.

Of course, the best thing would be to avoid ending up on the surgeon’s table in the first place. Doctors say they cannot emphasise enough the value of healthy eating practices and physical activity. “Look at the average day of a school kid. From school to home to tuitions, where is the time and space to play? Besides, private schools would rather invest in money-generating activities (such as extra classrooms) when it comes to space, instead of having a ground for the kids to play,” says Dr V. Mohan of Dr Mohan's Diabetes Specialities Centre, Chennai.

Family support is also important. “Thirty per cent of obese kids will have obese parents. There are genetic reasons, but unhealthy eating practices also need to be curbed because kids follow the parents,” says Peters.

Besides, surgery is not a permanent option. Says Kalhan: “If they go back to their old ways—start eating like they did, become inactive—then nothing can save them.”